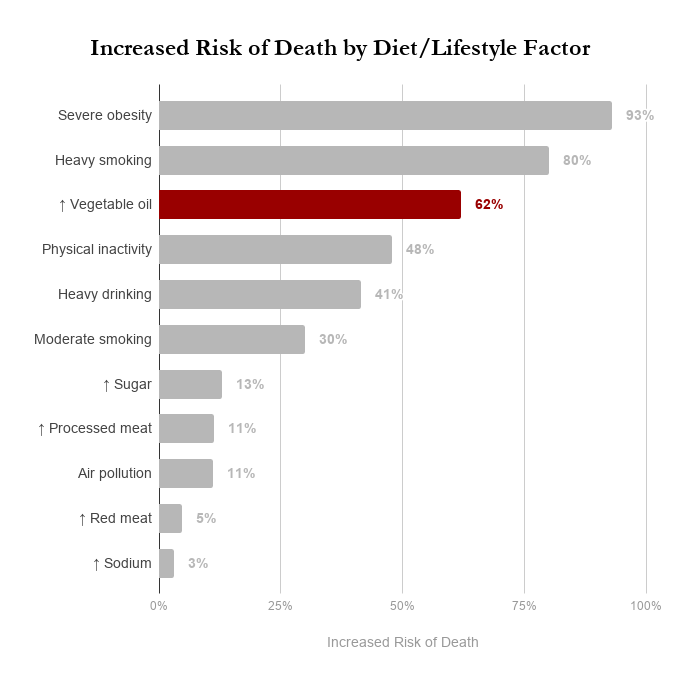 Death by Vegetable Oil: What the Studies Say

In a world without vegetable oil, we may be twenty pounds lighter, have half the amount of heart disease and cancer, live longer, think clearer, feel better, and be happier and less depressed. 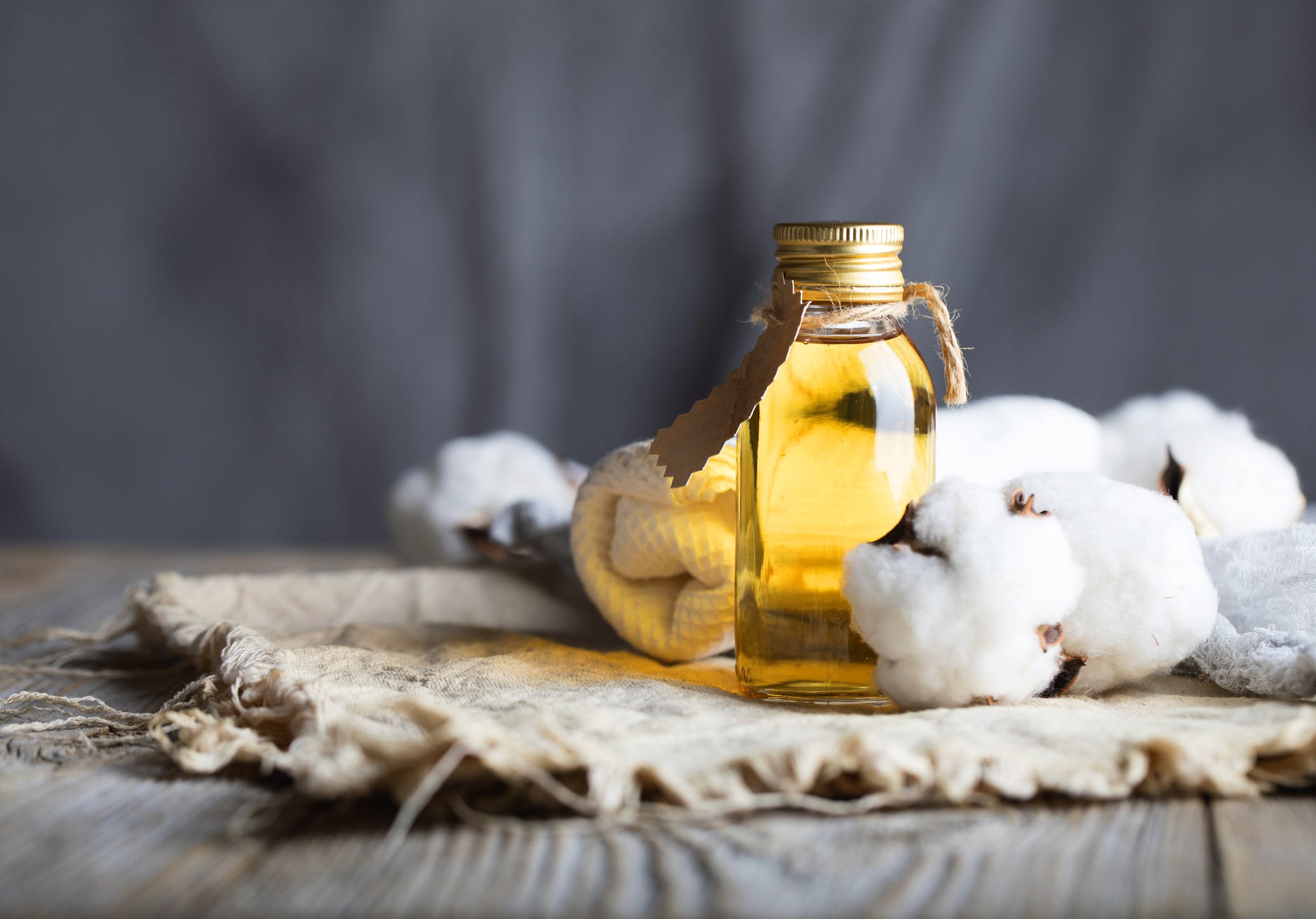 The lucrative story of the cotton seed oil - Diet Doctor

Looking back over the last 40 years, it’s hard to understand how we could have been so gullible. We believed that fat, and more specifically saturated fat (found primarily in animal foods), was thought to increase cholesterol and cause heart disease.

The title says it succinctly. Stay away from vegetable oils.
It may not be the vegetable oil itself, but the residual chemicals from processed vegetable oils, especially hexane…the solvent used to extract the oils. Hexane is basically gasoline. As a general rule, I don’t consume gasoline, except in my car.
From Britainica.com:
Most of the oil present in these residues, and in meals made from seeds and nuts that naturally contain little oil, can be removed by extraction with volatile solvents, especially petroleum benzin (also known as petroleum ether, commercial hexane, or heptane). The solvent is percolated through the meal, dissolving the oil, which is finally recovered from the solution by evaporating the solvent. The solvent is also recovered and used over again.
No industrial process is perfect, but the oil sure looks pretty.

The problem is the ‘vegetable’ oil itself. Read the link I provided, if you haven’t yet. The stuff is basically industrial lubricants, not food. Industrial chemical processes are pretty good at removing solvents from whatever was dissolved by them - but yes, if any of that stuff is left behind it’s going to cause additional problems if you’re eating it.

Conclusions Available evidence from randomized controlled trials shows that replacement of saturated fat in the diet with linoleic acid effectively lowers serum cholesterol but does not support the hypothesis that this translates to a lower risk of death from coronary heart disease or all causes. Findings from the Minnesota Coronary Experiment add to growing evidence that incomplete publication has contributed to overestimation of the benefits of replacing saturated fat with vegetable oils rich in linoleic acid.

Sorry, I’m no fan of vegetable oil (don’t use it), but even assuming one could actually track what a large number of people eat consistently for 7 years (highly doubtful), I’m still struggling to make any sense of the key graphic… 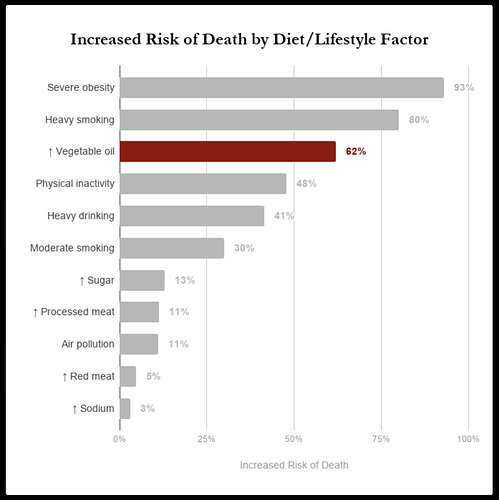 Of course not … so is this one of those “relative risk” statistical vodoo charts? Similarly, you can significantly reduce your risk of dying by switching from being obese to eating vegetable oils (from 93% risk of death down to only 62%)? Silliness, of course.

And by the same token, red meat kills, (and so does higher sodium)? Compared to what? … a standard american diet with carbs instead?

Again, I don’t doubt that vegetable oils are a really bad choice for maintaining health, but the study is rubbish.

I agree, but pretty good is not enough. I am a specialist in measurement and control systems for industrial control systems. There is a tolerance for what we can measure, and what we allow to pass. IMHO we cannot accurately measure the crap that is in the final product.
Take away is avoid processed foods, which we all agree.
Our body is the ultimate control system.

Austin Bradford-Hill, who came up with the criteria for using epidemiological data to prove causality, said that a relative risk ratio of less than 2.0 was not really worth looking at. And even then, other criteria had to be taken into account.

As I understand it, the problem with seed oils is not actually the increased mortality (though it is plausible for there to be some), but the inflammation and the structural problems caused when the polyunsaturated fatty acids from them get incorporated into cell walls, and so forth, especially if they are oxidised from being used for cooking. The main difficulty with these substances is that they are so new to the human diet, as opposed to the polyunsaturates found in butter, lard, and tallow. It’s a matter of a little over a century, as compared to about two million years.

I am going with n=2 million years

I distinctly remember hearing for the first time that these polyunsaturated seed oils have been incorporated into our cell membranes in significant amounts, changing the chemical and physical properties of the membrane. I knew enough about physiology for this to stop me dead! Although I didn’t eat a lot of processed food at that time, it led me to make a huge overnight shift.

Thank you abc Science (where I first heard the information)

The rationale for introducing Crisco into the human diet seems to have been, "Well, we have all these cottonseeds left over, and when we extract the oil and fiddle with it, it looks a lot like lard, and it doesn’t make people gag, so . . . "

Shakes head… I still feel a kind of horror that my childhood was one of margarine on soft white sliced bread, cooking margarine in our baking and an addictive breakfast cereal with great marketing just to make sure…

A short stay in the hospital emergency room this year (an incident with a kangaroo and a bicycle, I am healthy!) showed me that margarine is still on hospital menus here. And the meal looked like it was labeled as a spare one for diabetics!

Does not contain vegetables.

If you graphed PUFAs, it would look the same, even worse.

There are those who believe PUFAs are the root of all evil. Those who look at the French, who can supposedly eat croissants and bread and stay thin and healthy.

I still think sugar is worse than PUFAs. That’s my opinion, based on how I gained weight (what I’d characterize as a low PUFA, high alcohol and sugar diet).

Never have time for videos…

While I think PUFAs are bad, I don’t think they are the sin qua non (the essential element) for obesity. That is, one can eat a low PUFA diet and get obese.

And I don’t think saturated fat cures all ills, which is what many who believe in Petro D’s protons theory believe. I think the body is more complex than fat cells and their relative insulin resistance/sensitivity.

So, while I try to avoid PUFAs, I still eat some chicken and pork. I just eat less and eat more beef. I also keep low carb and still think carbs are bad for me.

Fish oil is a PUFA right? Do we still think this is okay? What about olive oil (MUFA)?

Hexane is basically gasoline. As a general rule, I don’t consume gasoline, except in my car.

You may be onto something, Diesel cars do run on vegetable oil after all!

I assume the overwhelming majority of seed oil is consumed via processed food that is bad on a lot of levels.

If I ate a diet of meat and sauteed greens and cooked the greens in soybean oil vs in tallow vs in olive oil would I see the same effect? I choose to avoid the processed seed oils but my current diet isn’t conducive to eating any of them in great quantity.
Meanwhile my SAD family eats all the snack foods in boxes and bags and baked treats etc that feature soybean oil or the like as one of the first couple ingredients