For this recipe we’re going to use Spanish Chorizo sausage. Chorizo often come smoke dried and hard which is a little more difficult to work with - you might have to marinate them in a little stock before cooking them. The ones I am using are freshly smoked by a local charcutière in Canberra (Pialago estate)

Traditionally this recipe would use a sweet red wine, and the sausage would be marinated in that overnight, but I decided to take a short cut and use smoked tomato sauce instead - and I think it worked out better and lower carb in the end.

The final dish is a little bit theatrical as it uses a poached egg that sauces the dish at the table. 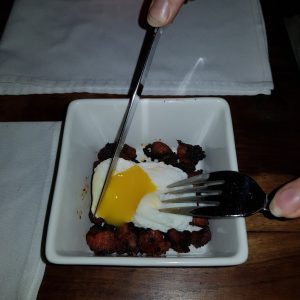 Per serving:
275 kCal
24g fat
3g carbohydrate
12g protein[wpurp-searchable-recipe]Tomato glazed chorizo with egg - - Smoked tomato sauce, Chorizo sausage, Poached egg, Prepare the ingredients; Chop the Chorizo length ways so it sits flat on the board; Slice it parallel into 1cm battons ; Dice it at right angles into 1cm cubes; Cook in a smoking hot cast iron pan, the sausage should contain enough fat to lubricate the pan but you might need to help it with a little extra fat; Fry until the Chorizo stars to get golden edges; Add 2 tbs (about 1/4 cup) ; Cook until the sauce has coated and glazed the sausage and started to caramelize; Plate in a small bowl with the poached egg; - [/wpurp-searchable-recipe]

I make -and eat chorizo a lot, my most favorite dish!