The more obscure and weird benefits of Keto

Besides those that have been mentioned, here are my additions:

Love all the benefits keto brings, yet to see any negative effects past fat adaptation, which I think I’m there, relatively, after 4 months of constant adjustments. Though I think sub-branch ketovore offers others, e.g.: Testosterone level and T’s associated benefits. I can certainly feel my libido gone up after substantially cutting back plant based food in recent weeks, and I used to eat enormous amount of vegetables, nuts and seeds.

I had this stupid black big honking mole on my shoulder.

Similar here, I had a wart-like thing 3 mm diameter for the past two decades on the back of my left leg calf…after 2-1/2 years now, it just fell off in the shower. KCKO!!

I know, it is wild! so cool right?

Glad you got rid of your thing too!

One more. Pre keto each morning in the shower, I would spin my head/neck around to loosen joints up. There was always popping/cracking of the joints from sleeping overnight. Now there is none, it’s just smooth stretching of the muscles. What up with that?

Crazy, right??? Same here. Every the crunching in my knees is diminishing… and that was supposedly calcium build up.

yea my ‘crunching is gone’ also like you and Robin.

I thought OLD age as I head there was my crunch issue mostly but I think it is oxalate crystals crunching maybe which I got rid of?? or the hormones sending more lube to the joints with healthier changes? NO IDEA on it but I sure love it.

I don’t full scope on science behind it but I think US humans on a real healthy eating plan shows massive improvements on which life should be ya know…IDK but I will take it, I love feeling so much better without issues that were ‘just there’ but ya know…

one thing is when something is OFF just a tad, I FEEL it instantly. In that it ain’t no ‘slow roll to something is going wrong’ cause when it changes from health to icky, I feel it in an instant, which to me is good cause I can deal fast with a health change. Many go ‘oh so long’ in bad shape and bad changes coming that they can’t even tell thru their body something is off til too late.

I like my body tells me fast now in life if I got issues.
Just chatting it out

One more on my long list…
Many years prior to Keto, I had this persistent sore on the helix of my ear that would never seem to heal entirely. A couple of times a dermatologist injected steroids to it. It would heal for a short time, and then reoccur. Post Keto, it healed completely. It has not come back in over 2 years.

Yesterday I was sitting outside on a deck chair, at the end of a relaxing week at the beach, reading a book. I suddenly clapped my hand to my face; no reading glasses. I can’t believe I can still read normal sized text unassisted if the light is good. Pretty darn amazing!

@Hallie. Hold on! You saying keto has led to reading without your glasses??? That is the BEST result I have heard so far. SO JEALOUS!

I only have 10% of sight in one eye. I have only seen light changes and motion, no details my entire life with that eye. One day I realized I saw something approaching me from that side, and then realized I could see how many fingers my husband was holding up and he didn’t even have to move his hand for me to focus on it. I certainly can’t read anything but at least I can see things, real whole things now. I’ll take it.

Crazy, right??? Same here. Every the crunching in my knees is diminishing… and that was supposedly calcium build up.

Have you tried vitamin k2? Such as natto or other K2 sources? Vitamin k2 supposedly keeps the calcium where it should be, though this is commonly considered to be from the blood to the bones. I’m not sure it would work from unwanted calcium in friction locations.

Might also be less inflammation in joints, leading to reduced crunching.

Yes, I take D3 and K2. Religiously. Same for potassium, magnesium and collagen. I think collagen has helped more than I anticipated… figured it was a fad. But definite changes in skin, nails, hair etc. I’m at the point where I won’t stop any of my supplements, because the combo is working.

Yes. Outside of my dark house no glasses needed and my arm is not even outstretched

I had a surprise in my 5 year drivers license eye check too; I could read the whole page having failed the last few rows 5 years earlier.

I’ve never needed glasses but has taken to using cheap magnifier ones for the last 10 or 15 years for fine work or reading in bed in dim light. Still use glasses for those things. Pretty darn amazing hey! 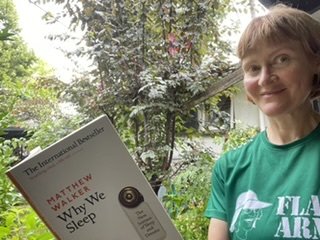 Worth reading too! Sleep is my focus at the moment

I take basically the same, though no potassium. Mg, I take that…sometimes. I go through phases. For K2, I’ve been using natto lately.

Have no idea if I should attribute “this” to keto or the supplements I started about 4 months ago. Perhaps it is imaginary.

Here it is. I’ve done logic puzzles for years. I’m sort of like the turtle, slow but almost always finish. In the past couple of weeks, I’ve started completing them in quicker than average time. The change is notable. If it is practice makes perfect then I’ve spent thirty years to get here.

Many (like me) notice a significant increase in mental clarity from eating keto. That would certainly help solving puzzles! Unexpected happy benefits are so cool!