The Future of Fat Summit

A lot of people who don’t like polyunsaturated fats/seed oils spoke here:

Could be interesting, if you have the time.

Personally, I’ve backed away from the idea that PUFAs cause hunger and saturated fats abate hunger. If they do, I’ll be darned if I can tell they do, at least in a primarily meat-eating diet.

Could they cause other deleterious problems? Maybe.

the idea that PUFAs cause hunger and saturated fats abate hunger.

That one doesn’t make sense to me either. But the notion that PUFA’s new to the human diet over the past 180 years might be able to cause trouble does make sense. I watched a lecture by Tucker Goodrich about seed oils that seemed over-the-top, but then Chris Knobbe gave a lecture at a Low Carb Down Under event on the same topic, but with actual data in support, that made a lot more sense. What Nina Teicholz has to say about PUFA’s in fast food restaurants is scary but well-documented.

Well, I think Tucker Goodrich did get harmed by PUFAs. But not everyone has the same effect.

But there are a lot of folks that believe PUFAs = obesity, Dr. Eades, Peter D. from Hyperlipid, Brad from Fire in a Bottle, etc. But I can’t tell any effect. It would be so much easier if I ate saturated fat and got an effect. But I don’t.

I do think too many PUFAs could be an issue, and of course over-heating them is troubling. Heart issues and PUFAs are particularly troubling.

It can’t possibly be that all PUFA’s are damaging, because there are some that occur naturally in the foods we evolved to eat. As I understand Dr. Knobbe and some things Nina Teicholz has reported, the problem comes from (a) PUFA’s new to the body, and (b) damage to said PUFA’s from heating oils to cook with.

It’s not for nothing that humanity’s preferred cooking fats were always butter, tallow, and lard, even in those countries that started cooking with olive oil a century or two ago. In ancient times, olive oil was strictly a cosmetic and a lamp fuel.

Olive oil can at least be cold pressed. The seed oils require as much refining as petroleum products.

Am watching an interview with Benjamin Bikman (it’s been linked in a couple of threads already, so I won’t link it again), in which he states that anything that causes systemic inflammation causes insulin resistance. One example, of course, is ω-6 fatty acids (particularly linoleic acid, the most easily oxidised fat) which are particularly abundant in the industrial seed oils. Another reason to avoid these oils.

He also states (for which I’d like to see some data) that “protein and fat combined are more anabolic than protein alone.”

I think you and I are on the same page. But let me lay out part of the anti-PUFA theory.

Allow me to put on my anti-PUFA hat. It’s true that all PUFAs aren’t bad. You refer to butter, tallow, and lard. There’s also chicken fat, a staple with some.

But what’s happened over time? I read study that was old and was looking at the fats in animals eaten on an island country. The fat in chickens was 70% saturated. 70%! The fat in their grazing/feral pigs was super high in saturated fat, too.

What would happen now, if you took your pig fat or chicken fat and had it tested? It will be quite low on saturated fat, as pigs and chickens are what they eat, and they are eating corn: Disastrous Trends in American Bacon - Fire In A Bottle

In The Croissant Diet specification, I advise against the consumption of pork fat. This is ironic since The Croissant Diet is loosely based on the historical diet of France and when I was at The French Culinary Institute every recipe started with the...

I know you like bacon. The bacon you are eating is not the bacon you would have eaten 100+ years ago. It’s filled with PUFAs, and it wasn’t then.

Add chicken to that, with these crazy chickens that are only alive for a short time, and fed higher fat (soy, corn) diets because they get bigger faster.

Then consider that basically everything – and I mean EVERYTHING – that’s prepared and that you buy at the store has some type of seed oil in it. Heck, the olives I used to buy from the local store were in sunflower oil.

We haven’t even gotten to “highly processed” foods. Almost all of those are filled with PUFAs and seed oils. 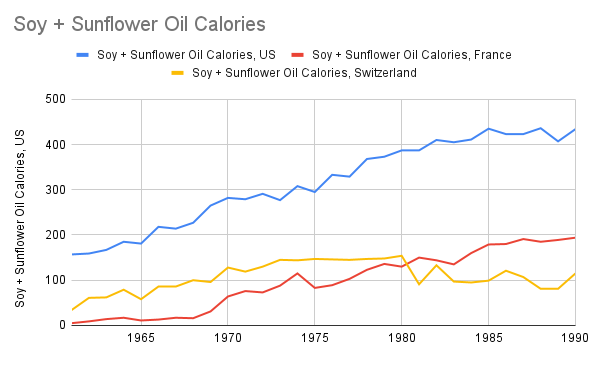 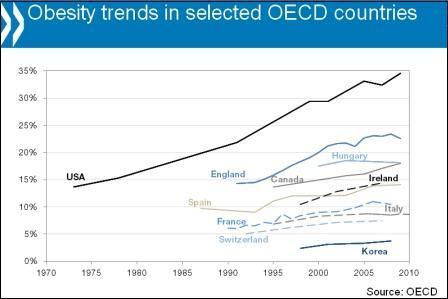 The French Obesity Paradox - Fire In A Bottle

The French and Swiss stayed lean for decades while consuming more calories than Americans.

And see that we’re getting overwhelmed by seed oils.

So, we basically *$5^!! ourselves by saying that fat was bad, so “good” fats like butter and tallow and ghee (all from a cow, which has less PUFA no matter what it eats) were verboten, then adding in oils as being “good” instead. And we created an environment where PUFAs can flourish.

Meanwhile, if you read Hyperlipid’s Protons Theory parts, he lays out a very scientific theory that seed oils cause mice (mainly) to overeat and saturated fat to cause lower weight mice. So good, that I was 100% convinced I would eat saturated fat, and I would get full.

But even with my tests, where eating saturated fat did not equate with feeling full, perhaps they were invalid, as I still had fat cells that were filled with PUFAs? Impossible to say, since I can’t get that tested.

For those who argue the amount of PUFAs cause obesity, that seems to be correlation, not causation, though Hyperlipid does provide a possible mechanism for how that could be.

Personally, I can’t rule out that PUFAs do cause obesity, as I can’t test this well enough. We’d need more studies in humans, and there are precious few of those.

Sorry, I still can’t get my mind wrapped around the “Croissant Diet.” I read a few paragraphs and lose focus. Sounds like a bunch of gibberish.

Am I missing the chance to learn something useful based on real science?

Could they cause other deleterious problems? Maybe

It has been awhile since I have done the research but I have urged family members to give up seed oils! First of all, conventional Canola oil is refined with hexane as @PaulL alluded to. That I remember reading.

Personally, I can’t rule out that PUFAs do cause obesity,

I just watched a couple of videos by Dr. Anthony Chaffee, a neurosurgeon who has been carnivore for the past three years and off-and-on for the previous twenty. His take, which accords with what I’ve learned, is that PUFA’s in excess, particularly ω-6, and particularly linoleic acid, cause systemic inflammation and insulin resistance. That could eventually lead to obesity, but it doesn’t mean they cause obesity directly.

The other concern with PUFA’s is that the novel types in modern industrial seed oils are replacing some of the fatty acids that are supposed to be in cell walls (all the walls of all cells are made of fatty acids and cholesterol; it’s called a “lipid bilayer”). They render cells more permeable, in ways that are not good for the cell, and they affect how cell linings join together (this can lead, for example, to irritable bowel by making the intestinal lining permeable).

We do need a certain minimal amount of ω-3 and ω-6 fatty acids, but the quantity required is not all that great. Most of us consume far more ω-6 than is good for us. As Stephen Phinney remarks, the challenge, when eating the standard American diet, is not to get enough ω-6, it is to avoid getting too much.

First of all, conventional Canola oil is refined with hexane

And I don’t believe it’s the only one, either.

Sorry, I still can’t get my mind wrapped around the “Croissant Diet.” I read a few paragraphs and lose focus. Sounds like a bunch of gibberish.

Could not agree more. I would love to eat butter croissants all day long, yum! I would be 50 lbs heavier in 6 months! If I ever decide to cheat again then maybe I will try it, it sounds like a lot of fun but weight loss, that will not happen doing this. Actually now that I think about it, I do not even have to question it. As a teenager who was at her ideal weight I spent a summer with a relative who lived above a bakery in a foreign country, no junk food available. I spent the summer eating freshly baked rye and sourdough and croissants (I would assume although the rye was my favorite), slathered with butter, apricot croissants and all sorts of wonderful treats. By the end of the summer I had a constant stomachache and I had gained 10 lbs! Turns out I found out years later I am somewhat gluten intolerant, I can have some but not at every meal

I am not sure I agree with his premise that PUFAs cause weight gain independent of other consumption. I believe Westman has had some clients lose substantial weight eating almost every meal at McDonalds (consuming only meat and cheese and eggs, no bun) because that was all they could afford and they did not cook. I am sure much of that was fried in canola or other seed oils. Not that anyone recommends doing that, it is not ideal

I am also wondering about O3 for those of us who eat mainly meat. The studies done are done on high carb folks.

I still eat fish, mainly because I can keep cans at work.

Well, if you eat mainly meat and eat fish packed in water instead of soybean oil, you will probably get enough of the ω-3’s to be okay, while keeping ω-6 to manageable levels.

From time to time, it wouldn’t hurt to eat some wild-caught salmon.

Have you seen any research to suggest just how much of the essential fatty acids we actually require?

was enough to have me banish all sources. That’s a seriously scary situation. To think that the structure and function of a membrane is altered … shivers up my spine!

Sorry about being late to this conversation. But the Croissant Diet reminds me of my favorite I like to tell people when they ask. I tell them I am on the B.A.D. Diet. And it is totally Vegan. BAD stands for Beer And Donuts.

Got me through college. How about you?

Actually the advantage of saying this is I don’t have to explain Keto and overcome their preconceived prejudices against Keto. Usually on account of failure at trying it without understanding it, or being scared and misinformed by others.

How does one go about wildly catching a fish?

Mrs Bear and I went fishing. First cast. A fish took the bait. It was silver. They are known as a Skippy. It’s eyes were so big. It looked at us. But didn’t seem to focus. I cut its arteries with a knife. I saw the blood and felt the wild intrinsic. Mrs. Bear cried. We packed up and went home. The beach was beautiful. Fish is a meat that doesn’t change its name in death. Sheep become mutton, cattle become beef. I cleaned, cooked and ate the fish. Mrs Bear demurred. It was delicious. I felt satisfied more so than satiated. We haven’t been fishing since.