The carnivore diet is not a low carb diet? (and not necessarily ketogenic) Dr Gabrielle Lyon

My point is your insistence that you must take in resistant starch does not apply to me and quite possibly not to a lot of other people either.

Resistant starch my dear is an essential nutrient if you don’t like getting cancers in the process of eating meat besides keeping the thyroid functioning properly.

I can just imagine how thin your intestinal mucosal barrier is and all it will take is one little tiny infection to set off the those microRNA’s collecting in your colon and intestinal tract over time and boom cancer metastasizes throughout your entire body.

Would love to see your science on a carnivore cohort getting intestinal cancer. Your hyperbole and scare tactics aren’t going to work on me

No scare tactics it is just reality and cross validated fact, gravity does exist?

Something’s not reality just because you say so, you’re not even carnivore I don’t understand why you think you could jump into these threads and try to insist that everybody eat the way you eat. Is it possible that you want validation for your choices?

just because you say so

Hmmm unlike other say so’ers I have actual evidence in my tool box? I don’t like playing with miniature cancer proliferating time bombs nor would I recommend taking a sewing needle to a gun fight.

I can just imagine how thin your intestinal mucosal barrier is

Bunny, is there still only the one mouse paper about intestinal mucus thinning (with no change to underlying intestinal epithelium)? Or do we have some human mechanistic studies to look at now about mucus barrier production?

Or do we have some human mechanistic studies to look at now about mucus barrier production?

What is so strange on a Ketogenic diet. mucosal barrier production (T-cells) goes up in the lungs[7] but goes down in the intestinal tract and tear ducts around the eyes, I wonder why that is? 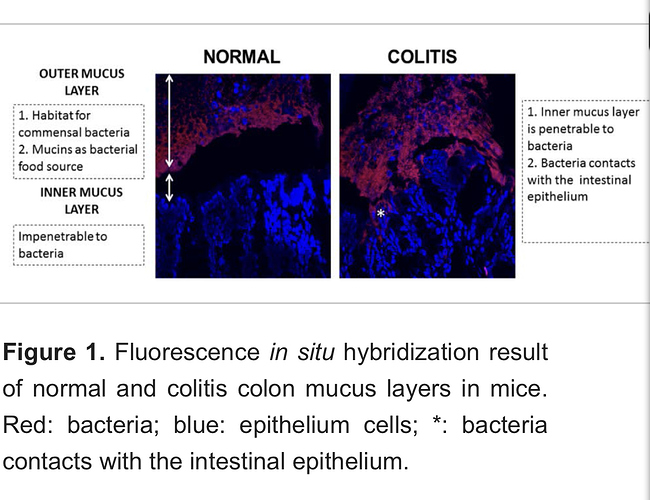 “The evolution of the gene responsible for red meat to produce cancer has been revealed:”

Diet can alter the trillions of microbes living in the gut. These bacteria, fungi, and viruses are known collectively as the gut microbiome. Research has shown that changes to the gut microbiome may contribute to obesity, diabetes, and cancer.

Studies have linked diets that are high in red meat to colon cancer, heart disease, stroke, and other diseases. The reasons appear to be complex, and researchers have been working to understand the factors involved. One suspected compound is a carbohydrate (a type of sugar molecule) called N-glycolylneuraminic acid (Neu5Gc).

People can’t produce Neu5Gc on their own. While most mammals produce the sugar, humans lost a functional copy of the gene needed to produce Neu5Gc several million years ago. However, when people eat things with Neu5Gc like red meat, the Neu5Gc can be incorporated into their cells.

The reason researchers think Neu5Gc may be harmful is that the immune system recognizes it as foreign and makes antibodies against it. This causes inflammation, the body’s natural response to protect against something harmful. This could be why diets rich in red meat diets have been linked to inflammatory diseases like colon cancer and forms of heart disease.

A research team led by Dr. Karsten Zengler of the University of California, San Diego, explored how gut bacteria are affected by a Neu5Gc-rich diet. The research was funded in part by NIH’s National Institute of General Medical Sciences (NIGMS). The study appeared in Nature Microbiology on September 23, 2019.

The team studied mice that were genetically modified so that, like humans, their only source of Neu5Gc was through diet. When the researchers examined fecal samples, they found significant differences in the bacteria from the genetically modified mice compared to unmodified mice. This showed that the inability to produce Neu5Gc significantly affected the mice’s gut microbes.

Mice fed a Neu5Gc-rich red meat diet had fewer types of bacteria in their gut microbiomes than those fed a soy-based diet. However, several types of bacteria were more abundant. This included Bacteroides, which are known to be efficient at using sialic acids, the family of sugars that includes Neu5Gc.

Using DNA sequencing, the researchers identified increases in Bacteroides enzymes called sialidases in the mice that ate the red meat diet. They suspected that the bacteria use this enzyme to release Neu5Gc from cells.

The team then examined whether sialidases were also increased in the human microbiome when eating red meat. They examined data from a group of unique hunter-gathers who live in a remote region of Tanzania. The Hadza eat meat only during the dry season when hunting is possible. In the wet season, they eat mostly honey and berries. Bacteroides with similar sialidase genes were much more likely to be present in the gut during the dry season.

In the lab, the sialidases were able to strip Neu5Gc from store-bought beef and pork sausage when it was cut up and crushed into a suspension. These findings suggest strategies to remove Neu5Gc from red meat using bacterial sialidases and potentially reduce the risk of inflammatory diseases. However, further work needs to be done to understand the role of Neu5Gc in human diseases that have been linked to diets rich in red meats.

“It’s our hope that this approach could be used as a sort of probiotic or prebiotic to help reduce inflammation and the risk of inflammatory diseases—without giving up steak,” Zengler says.

[7] “…Researchers out of Yale University changed the diets of lab mice and discovered the keto diet led to increased mucus production in the lungs. Mucus is very good at trapping viruses before they can infect you. The more mucus you produce, the less likely you are to get sick. …” …More

[8] Sialidases from gut bacteria: a mini-review

Diet can alter the trillions of microbes living in the gut.

The reasons appear to be complex

The reason researchers think Neu5Gc may be harmful

This could be why diets rich in red meat diets

The team studied mice that were genetically modified

Just like us obviously… and when have mice ever eaten a diet high in red meat in their history I wonder.

If that’s the proof…

I agree mice don’t eat Ribeyes and I doubt that has any correlations to humans?

“Science is about challenging your hypothesis“ - Thomas Delauer

Any study involving mice, especially those which are genetically modified to make them more susceptible to various ailments, requires analysis of the chow used in the study. In mouse chows, ‘high fat’ and ‘low carb’ don’t mean what they mean in nutritional ketosis. They mean a lot less fat and a lot more carbs. And the fats are usually derived from seed oils. I suspect that has a lot to do with how whatever protein is supplied gets metabolized.