Despite the title, Dr. Yeo gives due honour to the First Law of Thermodynamics. The topics covered are wide-ranging, including a discussion of protein, plus his thoughts on the thermogenic effect of food—not to mention several different popular diets. Dr. Yeo also discusses how the caloric values of food are calculated, which is fascinating in itself.

My advice would be to watch the entire video, before giving up on Dr. Yeo. His opinions may not always match ours, but this video contains many observations worth noting. He also has a book to promote, but you can easily ignore the couple of mentions of it.

In the Q&A session however there are some howlers…

This guy is a hoot! “Don’t complain about your job.” Love it!

@ctviggen Bob, if you haven’t yet, watch this video.

Thanks, Michael. Have very little time. My mother is in rehab and getting kicked out. Have to get long term care insurance. Working on that. Between that and visiting her everyday, I barely have time to do anything other than exercise, take care of the family, my mom’s cats, etc.

Have a 15TB server where a drive is going down. Don’t have time to replace. Have all the parts to put together a new server. Sitting in boxes.

I could list another 30+ things on my list to do, which I cannot do due to a lack of time. Have people coming from Sweden for the holidays, and we host Christmas.

Very sorry to hear about your personal vicissitudes on top of the general vicissitudes currently being inflicted on all of us. The video can wait and will be just as entertaining and informative whenever you can get to it. Best wishes.

My commentary on this… I almost gave up on him.

He says to lose weight you should eat 16% protein and more than 30% in fibre…. Hmmmmm…

Couple of very oblique mentions of metabolic effects, but he seemed not to want to discuss them.

One key area he completely missed was how the body controls the use of calories. It is the calorie usage side of the equation that we do not control… our bodies do. We have very little control. And we know that insulin controls the access to bodyfat, and this makes a big difference.

He claims that satiation is driven by fullness of the colons driven by protein and fibre… really?

He says we should be eating more than 30% in fibre. I am pretty sure our fibre required is zero.

Then says we should reduce meat to less than 10% of calories… with absolutely NO science or arguments supporting this, just a throwaway comment right at the end. This makes my blood boil…

I am not at all sure that he proved that calories don’t matter. I think that he suggested that calories absolutely do matter, just that the calculations commonly used are incomplete. I would argue to him that all the extra considerations he is suggesting are simply part of calories out.

Oh dear, he just said he thinks that steak causes CVD… and butter causes CVD. He is a CW jockey, no idea… interesting that he started gibbering as he was saying all this, almost incoherent. Says he has problems with saturated fat. Thinks it causes CVD.

At least he understands that you HAVE to supplement if on a vegan diet.

Also, at least he understands the real nature of ultraprocessed foods… most of the high end vegan foods are ultraprocessed. But then he says it’s OK to eat an ultraprocessed protein bar as long as it doesn’t have too much sugar.

I think, in fact, he did manage to explain why ‘C/c/kcalories’ don’t much matter in the first half of the presentation. I found that part pertinent and useful and would add only a couple of additional bits. (1) The nominal total energy (Kcals) in any food are an average of multiple samples; and, (2) each of us has an individual digestive efficiency. Re (1), the specific piece of steak you purchase at the shop may vary from the average calculated, maybe not much but maybe enough to make a minor difference in max available energy. Re (2), each of us varies quite a lot in just how much of the max available energy we’re able to extract from that steak into usable energy.

I disagree with his diet recommendations. But keep in mind that he’s just saying that the energy cost of processing protein and fiber are high relative to their usable energy output. From that perspective, filling yourself with fiber that requires a lot of energy to move from ‘food to poop’ and yields zero usable energy is logical. It helps make one feel full and thus reduces overall food consumption. Whether it’s healthy or not is another matter.

Also, he’s absolutely correct that a kcaloric deficit is required to lose weight. The problem with CICO diets, however, is that they concentrate on creating the deficit rather than on fixing the problems that caused the excess fat storage - hormones, how and why they do and don’t accomplish what they’re supposed to rather than cause excess fat storage. The reason CICO diets usually fail is that you can not maintain an energy deficit forever.

PS: As discussed here, I think it would be more useful to measure energy input and ouput via ATP/ADP rather than kcalories. It would be more complicated and I suppose that’s why it’s not done.

PS: I just calculated my fat/protein percentages from yesterday. It was a typical day for me, and Yeo’s 16% protein is not far off from what I actually eat every day.

I eat totally differently. I typically over a pound of bottom round for lunch (my first meal of the day). That’s 117g protein, 468 calories, 987 calories total: 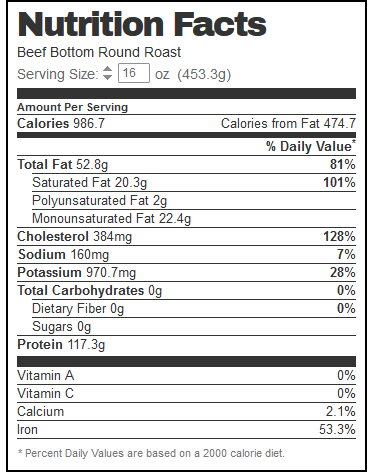 For lunch. Still have dinner to eat. Tonight is chicken wings with Parmesan cheese.

I’m at least double his 16% protein, and many days triple.

For me, his protein recommendations are way off.

He claims that satiation is driven by fullness of the colons driven by protein and fibre… really?

I did see someone advocating higher protein because it takes longer to digest, so you stay fuller longer. No idea if there’s actually “science” behind that, although in many studies, protein does seem to cause weight loss. Of course, those are often high carb diets, so higher protein means lower carbs, too many variables to ascertain what’s up.