Hi, I have a question about the phrasing of “fat adapted” does this happen automatically as part of being in ketosis? Basically, is ketosis just another word for “fat adapted” or is it something that comes later? For example, whenever I start keto I dont tend to lose weight right away like most people, I have to be strict keto for a minimum of a month and only then do I see a single pound start to drop. Does this mean it takes me over a month to be “fat adapted”? I use pee strips and get into ketosis within just a couple days even though my body doesnt recognize it in weight loss.

Once you are fat adapted, is it easier to get in and out of ketosis? For me for example, if it takes me a month of keto to start losing weight, and then lets say I have carbs on Thanksgiving, will it take me a month to reset and start losing again if I go back to keto the next day? Or does it mean that now that I am losing weight I am fat adapted so can dip in and out with less repurcussions?

Thank you for explaining

I’m waiting with you. I have reached my goal, but I still don’t understand all the jargon or the science!

I don’t think there’s a good definition. I perceive it to be when you can access your fat. That is probably going to be different than ketosis, as ketosis will happen when you no longer eat carbs. Your are burning fat, but this could be from the fat you’re eating.

But getting access to your fat is different, as it’s at least partly related to insulin levels.

And even a statement like “accessing your fat” is misleading, as fat isn’t static: things go in and out constantly. It’s dynamic.

I would say, though, at being truly fat adapted is going to take a while, a month or more.

Once you are truly fat adapted, then I think you are correct about it being easier to get into and out of ketosis. Though eating carbs can cause a lot of weight gain, mainly water. And I’ve found in the past it can take a while to lose that, which seems odd. 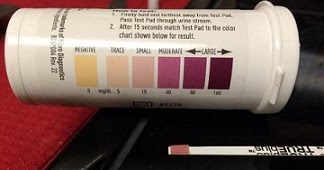 UPDATE!! (9/20/2017) I have a new post that explains how and why the body produces ketones , It will help you understand much better the di...

Once you are fat adapted, is it easier to get in and out of ketosis?

Once your liver runs out of glycogen, you’re in ketosis. most people accomplish that inside of 48hrs depending on diet. It only holds so much.

For me for example, if it takes me a month of keto to start losing weight,

That’s a failing of your diet, not ketosis. Being in ketosis and losing fat (not weight) are two separate things. Just because you’re in ketosis doesn’t mean you’ll lose weight. No shortage of people maintaining their weight for years in ketosis. Are you tracking your intake?

Basically, is ketosis just another word for “fat adapted” or is it something that comes later?

When you cut your carb intake, your serum insulin drops, along with your serum glucose. As insulin drops, glucagon stimulates two processes in the liver: ketogenesis and gluconeogenesis. The former is the production of ketone bodies, the latter the production of glucose. The body does not require much glucose, but it does require some; so the liver makes what is needed, if we are not getting enough in our diet (in the form of carbohydrate).

Muscle cells can use either glucose or fatty acids for their energy. The problem is that eating too much carbohydrate over too long a period causes damage to the cellular mechanisms that metabolise fatty acids. The cell doesn’t need these mechanisms in order to metabolise glucose, but when we cut our glucose/carbohydrate intake, these mechanisms are not efficient at metabolising fatty acids, until they are repaired. This repair process is what we call “fat-adaptation.” Until the fat-metabolising mechanisms are fully repaired, the muscle cells limp along using ketones. When everything is 100 percent, however, they really prefer to use fatty acids.

If you are an athlete, you will note a decline in your performance during the adaptation period. Eventually, however, your mitochondria heal, new mitochondria are born, and the other cellular mechanisms needed are reactivated. At that point, you are fully fat-adapted, and your muscles will refuse glucose and ketones (sparing them for other cells that can use them), in favour of fatty acids. At this point, people find that their endurance has returned, often to an even higher level than before.

whenever I start keto I dont tend to lose weight right away like most people, I have to be strict keto for a minimum of a month and only then do I see a single pound start to drop.

I’m guessing from this that you are a woman. Hormonal regulation takes some time, and many women experience this delay between beginning keto and starting to lose fat. A month is a very short time in which to become fat-adapted; normally it takes between six and eight weeks (for most people).

Once you are fat adapted, is it easier to get in and out of ketosis?

If you want to get out of ketosis, eat carbohydrate. Your glucagon will drop, your insulin will increase, and your liver will stop making ketones. To get into ketosis, stop eating carbohydrate. Your glucacon will increase, your insulin will drop, and your liver will start making ketones. The changeover in either direction is very quick.

lets say I have carbs on Thanksgiving, will it take me a month to reset and start losing again if I go back to keto the next day?

Dr. Phinney has made it sound as though that is what happens, but many people find they return to ketosis fairly quickly. However, we do not recommend dipping in and out of ketosis, regardless of whether you are eating a ketogenic diet to improve your metabolic health or to shed excess stored fat.

@buxomlass
I have nothing to add here. Just every time I see your name and pic, I feel happy.

It’s simple really.
Ketosis means your body is making ketones, adapted is when it knows how to use them as its primary fuel source. For me it took a very long time, I think eight months-ish, to start adapting as I was under crazy stress levels in the early stages, but now I can dip in and out easily without any ill effects, though massively prefer to stay ketogenic so do so the bulk of the time.

Fat adaptation, ketosis and fat-loss are 3 different things.
Fat adaptation comes when you are in ketosis for long enough (but they say going off keto doesn’t mean it resets. I didn’t go off keto until fat adaptation, to make it simple and safe). 6-8 weeks is quite typical, I had 7. Some changes happen, I mean, noticeable ones, I think, maybe not for everyone. It’s quite individual, I get a big change there but not from just being in ketosis.
To lose fat, we need a negative energy balance. Keto and having extra body fat doesn’t guarantee it, not even after fat adaptation, not even after fat adaptation. I always eat much, keto and fat adaptation couldn’t change that (I just overeat less often if the other factors involved stay the same) and my body doesn’t waste energy for fat-loss, only for avoiding fat-gain. Well that’s something.

I think it’s always very easy for a human to get into and out of ketosis… I have little personal experience as I just don’t feel if I am in ketosis or not, the early times were helpful due to water weight changes and there were some tiny other signs but I lost those. And I think I got new changes when I dropped my carbs more (both temporal and more permanent ones, like I almost never am really hungry nowadays. after fat adaptation I still had strong hunger just not that sudden sharp one out of the blue and it usually was soft, just not always. it’s quite different now).

I listened to this:

It concerns mainly high-achieving athletes, but at about the 50 minute mark, they discuss this very issue. Matt Carpenter does research in this area, and he thinks there’s no way to really know when one is “fat adapted”.

He gave the example of a single athlete who they put on a keto diet. Within a week, his fat oxidation was really high and his RL (which I gather is something akin to RQ) was low, indicating the athlete was definitely in ketosis and burning fat. But, the athlete felt terrible.

Mr. Carpenter’s opinion was that all the data showed this athlete was “fat adapted”, but he wasn’t really, as he felt terrible.

I think the idea was that it takes a while, and for different people, vastly different periods, and perhaps not at all. That is, some athletes can’t transition to keto, or at least never get past the point where they feel bad.

They also discuss how much carbs are useful. Of course, the interviewer is Zach Bitter, who runs 100 milers at an average of 9 minutes a mile. 9 minutes! I barely got under that when I was in the best running shape I’d ever been in. And that was for 3-5 miles. So, you’re talking different level folks here.

They also referenced this study:

Many successful ultra-endurance athletes have switched from a high-carbohydrate to a low-carbohydrate diet, but they have not previously been studied …

This is an interesting chart: 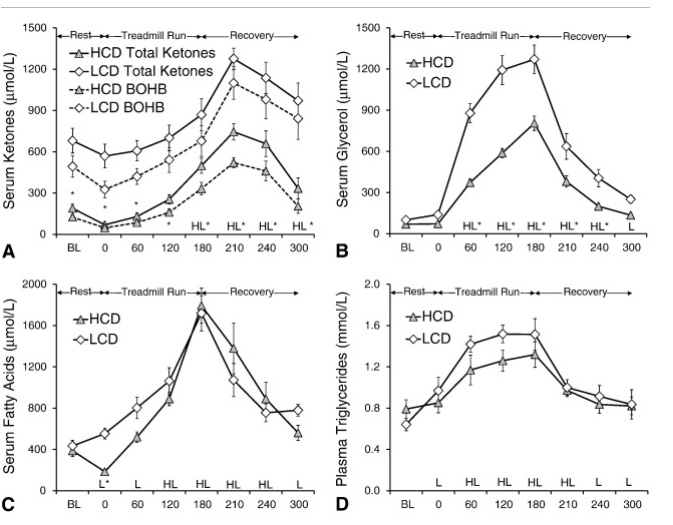 Then my work here is done!