Okay, one problem with Sous Vide

By now, anybody who has seen my posts, might gather that I have become a Souse Vide everything freak ! I freaking love that I can make any kind of meats, even cheaper tougher cuts, super tender and juicy !

But I am starting to recognize one issue… Because nothing during the prep ever gets very hot, by the time it gets to the plate, it’s only warm, at best. Hmmm. Would this be a problem for you guys ? Is their anything you do to rectify this ? Would a short, careful burst of microwaves be enough ? My big concern is that since it’s already perfectly cooked, I don’t want to do anything to cook it any more than it already is…

I’m very new to this, and quite honestly your persistent posts prompted me to try it.

For my introductory testing I’ve been using this as my sous vide cooker. The lowest setting is 175° F and that leaves the meat hot enough for me while eating. Not sizzling, but hot enough. So maybe you could just increase your cooking temp a bit for the last 30 minutes. I don’t recommend microwaving meat because in my experience it tends to rubberize it. Although, a short 30 second ‘burst’ might be OK. Meat seems to heat very quickly when microwaved.

If you sear the meat, you’ll get it hotter. Some people also use a “gravy” (made from the juices of the sous vide’s bags), heating the gravy, and using that to heat the meat.

If you sear the meat, you’ll get it hotter. Some people also use a “gravy” (made from the juices of the sous vide’s bags), heating the gravy, and using that to heat the meat.

What a great idea!

The whole point of sous vide is NOT to get the food hotter than you want it. If you increase the internal temperature, it won’t be perfectly cooked any more.

For example, I cook my steaks to 129°F. I sear them afterwards with a heat gun. The outside is sizzling hot, but it does not increase the internal temperature, so I have a perfectly cooked medium rare steak. 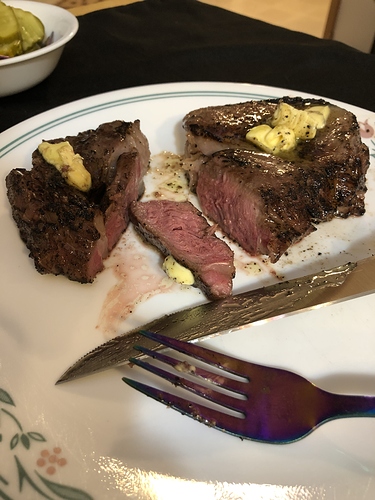 What @DeeCS said. It’s the temperature that the meat rises to that determines its rareness. As soon as you make it really hot all the way through it becomes well done. That’s the whole point of the “low” portion of low and slow cooking. The highest temperature the meat rises to determines how rare vs well done it is and the duration of the cooking how much breakdown in the meat’s fibres (tenderness).

The whole point of sous vide is NOT to get the food hotter than you want it. If you increase the internal temperature, it won’t be perfectly cooked any more.

Some people choose the sous vide temperature so that after searing, the internal temp is what you want it to be. But this depends on the thickness of the meat, too, and the searing technique.

I usually cook over 130, as over 130 will slowly kill bacteria (very slowly, as in 2+ hours). I usually add a few degrees to ensure that I’m over that. Then I try to sear using a super hot cast iron skillet or grill. Sadly, my stove sucks and I usually only get a good sear on the first steaks I put in the skillet.

The pasteurization tables are interesting. Oh, well, I haven’t gotten sick yet.

One school of thought for steaks is to sear before sous vide to kill the surface bacteria, but others say it doesn’t really do anything. .

Yes ! Dee is correct. In fact, even with the searing, it’s best if you let your meat cool just a bit after removing it from the bag, so that searing doesn’t bring the temp back up higher than it cooked at.

That lowest setting is way too hot. I’ve been doing most of my beef at 134’ish.
Getting ready to do some pork as a fairly high temp (for SV) of 150

I’m betting the SV machine which I now own two of, are cheaper than the machine you posted the picture of…
Only about $59-75 from Amazon

No doubt. The Breville kettle is just my initial experimental cooker to determine whether or not cooking in a water bath is worth the effort. I don’t cook much and don’t particularly want to. But putting meat in a ziplock freezer bag and hanging it in a pot of water for a couple hours is not much work. Certainly much less than the attention and cleanup required with other methods of cooking.

The problem I have with a dedicated sous vide cooker is that it’s essentially just an immersion heater with thermometer, and of no use for anything else. So I’m looking at purchasing a thermal cooker, which is basically a pot-sized thermos. Bring the contents to the desired temperature and let it sit for several hours to cook.

Love sous vide soft boiled egg I make a lot at a time. Running late, didn’t want to wait three minutes in hot water to reheat, into the microwave oven after a few seconds BOOM! Nobody ate eggs that morning. They were pealed of the shell btw. Another learning experience.

I’ve heard a bunch of people mention this… Just not really a soft boiled egg kind of guy, in spite of the fact I eat a ton of eggs cooked the old school way, in a skillet.

I put my plates (i use ceramic) into the SV bath to warm them for a few minutes (long enough to sear the meat). I also use SV water to preheat the gravy-boat, so that I’m not pouring a 1/2C of hot liquid into a cold container. Just give it a quick wipe before serving to dry it off. Helps keep things warm.

Another vote for pan gravy.

My routine is to sear the steaks (ribeye or NY steak) after 6-8 hours at 135 F, lately with a coat of homemade mayo applied before searing.

Once the sear is done, the meat rests while I add homemade chicken broth, butter, heavy cream, fresh ground black pepper, sometimes some sour cream, and whatever other seasonings I feel like in the moment, and simmer while scraping the fond off the bottom of the cast iron skillet.

Once it’s simmered, and reduced a bit, I pour it into a measuring cup and hit it with the stick blender to blend up all the bits.

It’s really pretty easy…only tricky part is keeping the pan hot enough for the sear, but letting it cool enough to avoid burning the gravy.

Gets nice and thick with no flour or other carby thickeners.

Haha! Done that before!