I did the 2 -48’s with that one meal of 1000 calories on Friday for supper and broke a bit after 5pm tonight. I am going to take a break off fasting for this week, and do my normal TMAD at 1pm and 4:30 for this week and then starting next Monday, I am planning on following this protocol until November 30 and also omitting all dairy except for butterduring that period, as I think it might be causing issues for me with weight loss.

@Ilana_Rose was mentioning this on a thread so this is her post:

This is what it looks like to figure it out easier, that she posted for me too: 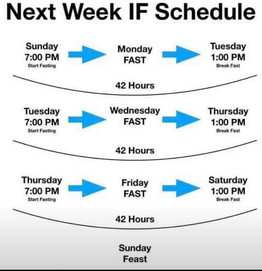 I think that the protocol that Brenda posted looks awesome too but that this one will currently work better for me personally. I posted about it on my thread too; and I think that @monsterjuice (Ashley) and some others might be interested in trying it as well.

I am on for fasting this week! My last meal was yesterday evening at about 7. I would like to go all the way to mid day Friday and ease myself back into eating for a social event Saturday evening. It will total less than 5 days, about 110 hours. I will do water, herbal teas, & electrolytes. My main goal is to bring my fasting blood glucose down. This morning it was 145.

That is great, Robin, Happy Fasting. Maybe try and get your sister to join in too!! =).

@Shallimar, where can I find more info on the Clark Protocol?

Thanks again y’all for the support while fasting. I completed a 72 hr fast last weekend but ran out of time to post then. This fast was harder than last month. There may have been several confounding factors besides that I previously had done 72 hours with Bone Broth twice a day. So I will test out a strict water/electrolytes fast again in November and see if it was the BB that made it easier or something else.

I just finished a 74-hour fast.

@Mekkins -Congrats on your 72 hour fast!!

Below is the Clark Protocol that Brenda posted earlier in this thread:

On the feast days you eat two meals each day.

This is an excellent protocol to strengthen your fasting muscle and does not seem so ominous to newer fasters wanting to do more extended fasts. This entire protocol last 22 days, over three weeks! I plan to follow it after the low carb Houston conference and I already have some of my other clients committing to the protocol.

Congrats that is great =).

I actually did see that post but somehow did not connect the title of the fast. Looks interesting. I may try it.

I’ve been watching for it too. Same for me. Starting 72 hrs after dinner tonight.

Also waiting for the November thread