I have gotten the Stok fueled unsweetened coffee creamer. It is has mtc oil in it. But also has casen. Which is a dairy. I am always on the look out to find something that be a nice creamer substitute. I will ck Amazon to see what there is for options. Thanks.

To make a coffee ‘creamer’ totally without dairy you’ll have to use MCT oil or powder. Read powder labels very carefully because they all contain some carbs. You could use straight coconut oil if you like the flavour. Coconut cream is an alternative that mixes as easily as dairy cream, but it contains less fat and lots more carbs than dairy. Choose brands carefully because many are sweetened! If you want something more than a mere ‘fat bomb’ you can add non-dairy protein with hydrolized collagen. There are many good brands, but again read labels carefully. Progressive makes an excellent one with zero carbs. For best results, use a blender. Stirring and shaking will only give you an oil slick.

Thank you so much for the suggestion!

My thoughts are that dairy’s purpose is to make calves grow as fast as possible. So there’s that and when it comes to cheese (which doesn’t come into being naturally) the casein protein (potentially inflammatory) is roughly 10 times higher than in milk alone. I cannot lose weight on keto when I keep cheese in my diet. I noticed that eliminating cheese also clears up my lifelong dandruff. So I think there’s definitely something to be gained by avoiding dairy if you can do so without feeling unreasonably deprived.

Welcome to our fabulous forum, Brett =).

I agree with you, I am doing Dairy free atm and I might have to keep dairy free forever (well having some rarely but mostly dairy free).

I still have a lot of weight to lose and have been losing very slowly for a bit so I decided to eliminate it for now to see if that helps. I had already only had cheese very occasionally but giving up the HWC is harder (I am doing it but I miss it, hehe).

Hi Wendysue - was it just the lack of weight loss that was the marker for you, or did you have intestinal upsets too?

Would be sitting on the couch at night. Horrible acid reflux! Burnt the heck out of my throat. I have tested my theory. Because I Love HWC!
And Love Cream Cheese! But unfortunately it’s not for me!!

I have lost weight with dairy, I dropped the milk in coffee due to the carbs, I dropped the HWC in coffee a month and half after starting this WOE only because I wanted to fully fast 18:6 no cals

But I still have cheese No issues, Although I usually have it to compliment meat not as a stand alone I don’t know if that makes a difrence

The only thing I might have issue with is Artificial sweeteners not sure yet, I tried a keto brownie recipe with swerve this weekend and I did have higher Glucose numbers but I might have had higher carbs overall saturday and sunday this weekend I am usually under 15 net but I was about 22 and 23 for the 2 days

Have you tried macadamia nut milk? People can tolerate macnuts when they can’t eat tree nuts.

Hi! No I haven’t tried Macadamia nut milk yet. I haven’t seen it available where I live. But I will look for it online. Almond,cashew. Don’t work for me due to nut sensitivity. Thanks for the suggestion!

I was pretty much lactose intolerant when I started Keto. The first few months I had zero dairy. Then I snuck in some parmesan, with no bad consequences. After a while, I added some goat cheese. That went well too. To make a long story short, I am not lactose intolerant anymore. The digestive issues that dairy caused for me are gone. That said, I do love cheese. I do have to watch how much dairy I do eat or I encounter a stall. I use cheese, butter and sweet cream now, but I try to keep it as a small component of meals, and not every day.

Is your dairy more isolate (protein) than hydrolysate (sugar/lactose)?

When you churn milk (butter milk) to make butter all the cream that collects on the top is sugar (lactose/galactose) and the bottom half is butyrate (ketones/short chained fatty acids[2]) or butter which contains no sugar.

Naturally aged cheese has next to no sugar because the lactose ferments. Sometimes sugar is added unfortunately.

It is when your mixing the sugar with the saturated fat that causes the inflammation?

Blame the saturated fat instead of the sugar? How stupid is that?

[1] “…It’s clear that a diet high in saturated fats – which are plentiful in cheese and full-fat dairy products – can increase inflammation. But other fatty acids found in dairy have been linked to health benefits such as a reduced risk of diabetes, says Dr. Hu. …” …More

When you churn milk (butter milk) to make butter all the cream that collects on the top is sugar (lactose/galactose) and the bottom half is butyrate (ketones/short chained fatty acids[2]) or butter which contains no sugar.

Maybe I missed something or read that wrong, but I’ve made butter many times, and you don’t churn buttermilk to make butter. If you’re making it straight from fresh milk, you let the milk sit still for a while until the cream separates to the top, then scoop the cream off, churn it, and then you’re left with chunks of butter sitting in buttermilk which gets strained and washed off the butter.

Lactase supplement doesn’t fix that for you?

Is your dairy more isolate (protein) than hydrolysate (sugar/lactose)?

You’re thinking Concentrate, Hydrolysate is when it’s broken down into Peptides. It also tastes like crap.

Not sure you confused me because I know nothing about actually churning it but I use to make butter in a mason jar with egg beaters attached to a wooden handle to turn the beaters built into the lid, a lot like a churn. Would use butter milk to make the butter. It took days or a week periodically rotating the egg beaters constantly to make the butter.

I guess taking it straight from the cow letting it sit and placing it in an old style churn is different?

I would really like to do that again and learn more about it.

I do understand the separation process though.

This is what I used (very similar: my jar was twice this size) when I was a kid to make whipped butter: 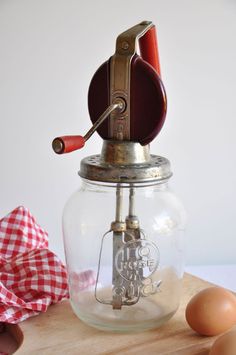 The more fluid cream comes out or oozes out of the little holes (and is really sweet if you lick it off your fingers) at the top as you rotate the beaters and the creamier part (not sweet) stays on the bottom.

My husband and I made some from Shamrock heavy whipping cream. Was good! Used a deep bowl, and my cake mixer. Doesn’t work with a blender. Interesting, takes a while but then it actually turns yellow,and you squeeze all the liquid out. Then use parchment paper. To roll it in. Cost is about the same as the Amish roll butter we buy. You can add salt or leave it salt free. Strange though, the homemade butter if I consume too much bothers my stomach. Where the Amish roll butter, dosnt.?? Its just heavy whipping cream and salt?