yea I get that. It is WHO we ARE and embrace it.
I am anti social loner type, which truly is what I love.
So I gear towards off grid, farm life, rural, no people, and leave me alone mostly type person…yea I know me truly HA

The freedom on the road in the rv is romantic, not one doubt about that but ya gotta truly want it or don’t bother cause we all know what we truly want to be, how we want to live and engage out there in this big world…just follow the path you love at all times and ya can’t go wrong!!

Expand on big hobbies and make them more personal in your life and engage in groups that you enjoy…find others that are like minded in your path of what you desire and all is the best way we can move forward I think.

Luckily with carnivore we got that clairity of thought to put into our lives and how we want to go forward and enjoy our time on this Earth!

What is that thing on the cutting board? I can’t always identify your food and I am a curious person

I am lucky with my cycling then… I usually feel I am not, I need to use normal roads except if I take the scenic route to the next town, wildlife park forest, it’s so very pretty now (and always, actually)! And I am not into some normal roads with simple views, I would like some fancier hills… But traffic is very low here and I barely ever see a human. And Nature galore, not even many fields. It’s a bit much uphill for me now (and a lot in one direction so I almost never ride there. I need to stop 5 times even when I am in shape and I brake the way back) but I need it to improve and not being bored

Things changed again. My appetite went lower (I expected that after my maybe-3000 kcal day…) but my supplies are a bit bad too. I basically run out of meat. Not to the extent I did it a year ago, I have a little this and that but not much. I have a decent slab of pork but we planned to make a goulash-like thing from it (the same just with pork instead of beef. we don’t have beef now and won’t for a while) as Alvaro loves it more than some mere roast, I consider it great too… I just don’t want the carbs. Sometimes it’s hard to be me. So maybe I will use it up, Alvaro can eat something else, he always has his veggie dish ideas too. (Of course he would eat the leanest pieces. It’s a leaner cut anyway… I actually ate the leanest parts of the pork shoulder, the fattiest cut I can use for a roast, along with some sausage to make it fattier…)
But I will be fine, this way or another. I am a huge optimist with a bad track record. Not enough meat (theoretically enough with my skills but low enough to make me a bit anxious) usually results going off but that has no sense and I trust myself now. But it’s better to keep lots of meat with enough variety near me all the time. Ready to eat in the case of the pork as it takes ages to get ready for the hungry impatient me. That me is rare but sometimes appears.

I have plenty of chicken liver now. I don’t want any now but it’s fine.

I wanted to skip lunch today and my body cooperated, yay! My stomach grumbled but that was as great against appetite as in my past

Hours later I am still borderline satiated with a negative appetite. And it’s 5pm. Yay. I will have a cute OMAD or something. Maybe TMAD, that works too but I plan an OMAD.

My only tiny problem at the moment is that I opened a bag of cream and it’s so much, IDK what to do with it, actually. 250ml, even Alvaro can’t eat it if he makes pudding (I found his starch! but he works late and I definitely won’t make pudding with starch and without eggs, I have my limits!)
I will need some recipes with cream as we will keep opening bags and boxes (that’s 200ml but with a worse UHT flavor. even the dairy truck doesn’t sell proper cream), Alvaro for his puddings, me for my coffees. I learned to drink coffee without cream most of the time now and it’s good, I don’t need all that useless and a bit sugary fat in my diet but now I need to do something with the cream. Like using it for some liver dish, I always wanted to try that. Too bad I made whipped cream from all for some reason or for no reason at all, more like…
And I have mascarpone too… I try to get off my mind from mascarpone + whipped cream = cheesecake, I totally don’t want desserts (my desire is very negative, I mean), maybe making and looking at them, it’s my hobby, after all and cheesecakes are pretty especially with jellied red fruit on top… I only make no-bake ones. Very much keto friendly but I try to do carnivore and anyway, it’s stupid to eat something I don’t want. Theoretically I could just make it and look at it and make photos and let Alvaro eat it but let’s be realistic. I don’t like cakes anymore but cheesecakes aren’t normal cakes, they are creamy wonders and I only tasted them a handful of times, always made by myself I think… My mascarpone pancakes are almost as good, of course but not tasting my pretty cheesecake is something I need to get used it through many cheesecake tasting first I suppose. Maybe I will make carnivore-ish cheesecakes, it seems very easy, after all, a cheesecake needs many things but those are almost exclusively animal products. Of course I don’t sacrifice anything, I want it to be near perfect for me

Oh well, things will get solved eventually, I am in no hurry, both dairy will last for some days more. And I have Alvaro to eat up if I feel the need to make a dessert

As long as I don’t make an eggy, very low-carb pudding (though I didn’t give up all hope regarding that. but it can wait). But he is not compatible with the very fatty ones either. I still remember when he went and ate up a cute lil dessert (100g fat. I told him this info multiple times. how could I fit it into it I wonder. but it looked small) soon after his big, fatty lunch. That didn’t end well.

But it’s challenging as I have no pork apart from the few bites I will eat soon… Unless I make something from the pork we have (thigh. a huge jump down from shoulders in fattiness).

Awake very early this morning nung so just got up and did the stair runs before a bit of a wait for CrossFit class. Didn’t get paired up for the hero wod and maybe that was for the best as I probably would have ended up being late getting back home to get ready for my late shift at work. So I did it all 1 mile run 100 pull ups (done as jumping pull ups, i might be good but I’m not that good lol) 200 push ups 300 air squats and finished with another mile run a fraction over 40 minutes so was really pleased with that achievement.

Got home in enough time for a bath and fuel in the form of a cheese omelette with bacon then off to work.
Dinner was 5 chicken thighs and a couple of thin slices of cheese .

Just having a think on what I fancy now!!??

See you in June lol

I ate some more eggs, more soup and a bit cream but this was the majority of my OMAD dinner at 6:30pm: 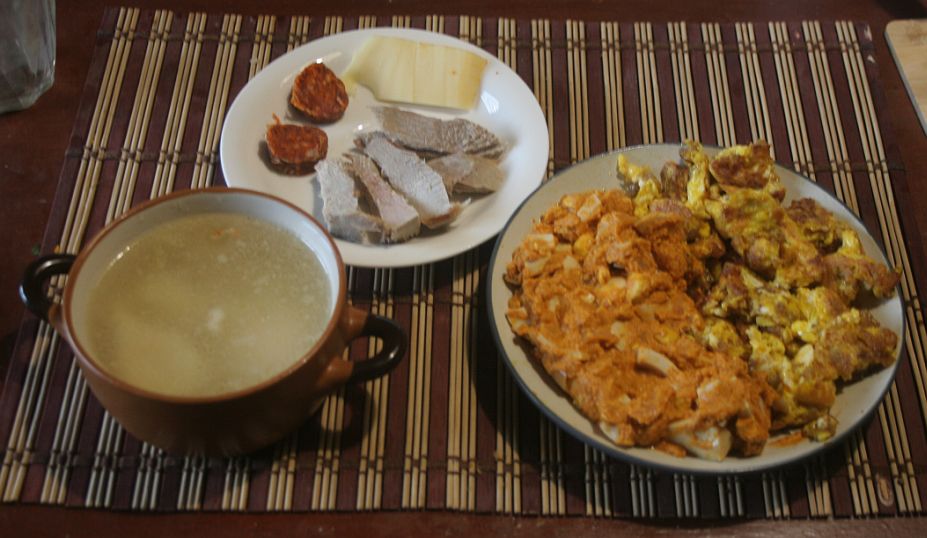 Duck/turkey soup with poached eggs, scrambled eggs with pork belly skin, egg stew (not carnivore as it’s stew and what’s worse, egg stew, made by Alvaro… but it’s low enough carbs for me), tiny leftover pork shoulders with sausage and eggs merely to make it better, not like it’s bad, per se but a bit plain as it’s the inside of the roast without any visible fat. But it’s still fatty and it makes it okay.
And now I run out of it.

I ate significantly but not very very much below my energy need as far as I can tell (I don’t remember the weight of the skin and no idea how much of it was fat tissue… I have a day when I have little meat so its fat content can’t interfere much and now I do this… but it’s not so important). As it happened before, waiting until dinner made my meal less joyful, it was more like just getting the nutrients I need. Even though I only got hungry at the right time. Oh well, it was still a nice enough meal and I am very content now, after midnight. I ate a tiny bresaola at night, it felt right

So I am almost at 100g meat for today (0,21 pounds)… But how could I eat enough eggs if I ate much fatty meat (like, a pound) every day? It’s still very low even from me but it happens here and there.

And the month is passed and my fruits are nowhere in sight (and they will be very little this year. it seems the case in other gardens too, what is with this year?), I don’t actually need or desire them anyway so I totally continue carnivore(-ish) for the foreseeable future. It’s way too easy and natural to me at this point. What else would I eat, seriously? My old keto food can’t hold my interest anymore. Nuts became some abstract concept.
It went way too easily… Yeah, I had very off days but still. I expected more hardships.
In November (okay, I started with a week without any fresh meat, I think… if liver doesn’t count) it was easy for 2 weeks but I still felt I am determined and keep myself on track, no matter how easy it was. I often thought “if I wasn’t in my true carnivore weeks, I would eat a little from it, mmm”, I wasn’t truly tempted so I could resist but I knew I would gladly eat the stuff in other times. Now I feel I am totally free but what else would I eat, carbs? (This is NO challenge to my inner rebel. But it’s very well-behaved lately. I wonder how long it will last this time. And yes, I only do carnivore-ish now so I have a tiny wriggle room but I feel the need for it is less than before. And I use it mostly when I have little meat so it’s harder to be pure. Or when we have a not exactly carnivore meat or egg dish, I don’t want to give it up but I don’t exactly need it, I would be fine with something carnivore instead. But I still don’t have enough meat in my freezer all the time and why to cook when Alvaro already made an almost perfectly fine dish? And I don’t want a badge. I am fine not being 100%. And I need to experiment anyway.)

The fatty end that is normally trown away by the butcher.

I get it for free

Over to Full Blune Carnivore June