I have stated in multiple posts on this forum that my opinion is that ketosis has always been the normal and natural human metabolic state. This because our pre Pleistocene and Pleistocene ancestors, yes even those in central Africa, had no viable nutritional alternative. Once our ancestors came down out of the trees of the rainforest onto the savanna, the evolutionary die was cast. Our ancestors gave up the big, microbe infested guts of our earlier primate ancestors used to extract dilute nutrients in mostly cellulose composed plants. In exchange they started to eat the more energy dense fat and meat browsing the savannas around them. They started to grow bigger, smarter and more energy demanding brains and at the same time arose from all fours to bipedalism that enabled the use of ‘arms’ and ‘hands’ to make tools to kill that new nutrient dense food source.

I’m going to start with this presentation by Chris Masterjohn on why he thinks ketosis is not the normal and natural metabolic state of humans. He uses the CPT1A Arctic Variant as his pretension. I think this is an excellent presentation that describes the role CPT1 in fat metabolism and understanding that is vital to this discussion.

I think the conclusions Masterjohn arrives at are erroneous and will discuss why so as this discussion develops. I’d like to hear others’ take first.

I have nothing to say scientifically. But I am interested in this thread a lot, since it is one of the most important issues in dieting.

My intuition is that if the body can do both modes (low insulin and high insulin), this means that both are “necessary and good”.

High insulin means store fat for the hard times, especially in summer, with fruits and all these things.

And low insulin means to use that fat during the hard times.

But of course, I could be wrong, and I would like to understand more what scientists have said about this issue.

The video was interesting, thanks. It reminds me of something a scientist friend said when I presented the ancestor’s diet hypothesis — that human metabolism evolution occurs relatively quickly, like over a thousand as opposed to 100,000 years. I’m told there are examples of this across the world. The point being that we are all likely to have different metabolic needs that are based on genetics. Lactase deficiency is an obvious example. The diets and metabolisms of Inuits (and early hominids) are fascinating, but I would not base my personal dietary choices on them.

That said, ketosis has eliminated the constant hunger I had been feeling for probably the last ten years, so I’ll stick with it (but also keep an open mind).

I think, like everything, the “answer” will be complex. Where did you live, in particular? If you’re in a location with potatoes, nuts, corn, etc., and have the processes to detoxify those, why wouldn’t you at least supplement with those?

As soon as we stopped moving with herds, we had to have some plant matter.

Now, how long would it take to become “adjusted” to this such that it affects your genetics? I don’t know. 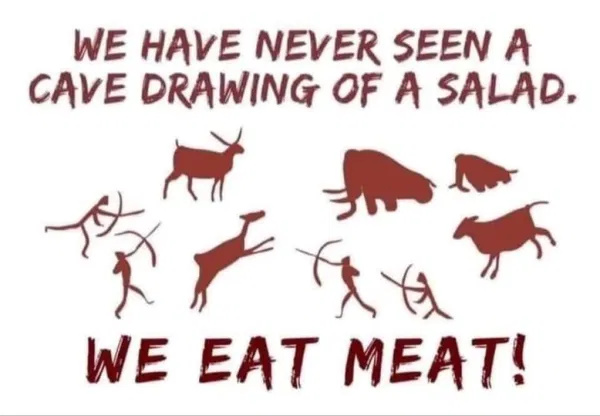 I think, like everything, the “answer” will be complex. Where did you live, in particular? If you’re in a location with potatoes, nuts, corn, etc., and have the processes to detoxify those, why wouldn’t you at least supplement with those?

Exactly! They ate what they even remotely thought would keep them alive, to pretend they had an actual WOE is insane, sure, of course they’d rather take down some huge animal, who the hell wouldn’t? But we ultimately have no idea what they did back then, we find some remains, do some tests, then take that and add in 80% assumption.

My view, who the hell cares what they did? If I was alive back then my goals would be to not starve, not get eaten by something bigger than me, and have somewhere to hide. That’s probably about it. Saying I won’t eat a salad because it’ll “poison” me, because a caveman didn’t is mental. I like salads as much as I like bone in Ribeyes… seriously! If anything, if they did eat salads theirs wouldn’t have been genetically screwed with and poisoned 50 times before they ate them. I’m all for looking into our pasts as humans, but this thing of blindy trying to be people we’re not living in a time we don’t doesn’t work. Not for me at least.

For people happy doing that… more power to them!

I will happily provide an opinion based on the principle of logic:

Further, the exact same argument can be reversed using the same logic: being in a non-ketogenic state is ‘natural’ or ‘normal’, which can be advanced by virtue of the empirical fact humans ingest carbohydrates and have the biochemical facility to metabolise them.

I listened to a book about the Comanches, and many of them followed the buffalo and ate basically nothing but buffalo. But they were a fractured group, having 7 or so different tribes, and some of those I thought ate plants too, if they were close to the prairie but next to a forest, for instance.

But for Native Americans on the east coast for instance, there were these:

Think of the Three Sisters as the Holy Trinity of some Indigenous cultures, a trifecta of agricultural sustainability, and as the base of a really good soup.

I think Michael’s question is related more toward whether ketosis is “bad”/dangerous if followed over time. I highly doubt it, based on the number of tribes and peoples who can be in ketosis for years.

I believe it has already been established that there is no qualitative evidence beyond one year on a KD.

I think too many folks get carried away on this perennial ketogenic state thing. To the point they are making arguments that our ancestors walked away from fruits because they didn’t want to get kicked out of ketosis. Why does it matter so much?

I believe it has already been established that there is no qualitative evidence beyond one year on a KD.

Is that true? I thought the Virta study was in its third year.

…our ancestors walked away from fruits…

What fruits? You may find this of interest:

For anyone who happens to think our paleolithic ancestors derived more than a pittance of nutrition from plant foods, here’s what some of them were before we domesticated and selectively bred them to be what we know today. Please realize that only a few examples follow. Virtually every plant product we eat has been selectively bred.

To be unequivocal, any naturally occurring non-animal food.

Is that true? I thought the Virta study was in its third year

From my reading of the study design and its reporting methodology, I’m not sure they have the data showing participants’ daily ketone readings for the study duration. Combined with the fact this is not a metabolic ward study, it is open to further challenge. Clearly, this was not the purpose of the study anyway (as its title tells us).

Studies using food-frequency questionnaires are far more questionable than this one.

Not to mention the fact that a metabolic ward study on any sort of scale would be prohibitively expensive, quite apart from the difficulty of finding a reasonably large group of subjects willing to be cooped up in one for a number of years.

In any case, my point is that we have accumulated a fair amount of data on long-term ketogenic eating to believe it is safe, regardless of the fact that it flies in the face of government recommendations.

@Jamesbrawn007 I am asking you to show me some specific Pleistocene ‘fruits’ not hypothetical ‘naturally occurring non-animal food’. Don’t show me a photo of your local fruit market because none of that stuff existed. Check out the second link I posted above. To be human ‘food’ a substance must be digestible by humans - not just ‘out there’.

Studies using food-frequency questionnaires are far more questionable than this one.

That’s not in dispute.

Exactly, which is why the body of evidence regarding ‘long-term’ KD safety is slim.

This goes back to my original reply, it is hypothetical. It is simply not possible to show our ancestors were in long-term ketosis.

Exactly, which is why the body of evidence regarding ‘long-term’ KD safety is slim.

And my point is that it’s no slimmer than the evidence for any other way of eating, and probably better. Have you looked at the Volek study, done on athletes who had been ketoadapted for at least two years?

It is simply not possible to show our ancestors were in long-term ketosis.

By the same reasoning, however, it is simply not possible to show our ancestors were not in long-term ketosis, either.

Although, given what we know of their diet from archaeological digs, it might be the safe bet.

Have you looked at the Volek study, done on athletes who had been ketoadapted for at least two years?

I have. Conversely, have you read the feedback from one of Phinney/Volek’s most notable study participants - Ben Greenfield?

it is simply not possible to show our ancestors were not in long-term ketosis, either.

Absolutely, the issue only arises when one party asserts they were.