Hello! My husband and I went Keto May 2017, and I’ve lost 70 lb! (My husband is down 65!) we recently found out we are expecting our second child! It’s still early, only 7 weeks, and I’m still losing weight. The problem: I haven’t been tempted, not once, by non-Keto foods…and suddenly I’m dreaming of doughnuts. And pancakes. And spaghetti. And crackers. And pepperoni rolls. And more doughnuts. Ah!
Obviously there are Keto versions of all of these foods, and they’re all repulsive to me. I can’t eat and I’m starving at the same time. Anyone else already solve this problem?
Whitney

On a serious note, I am sure there will be people coming along with experience in such things. I don’t have any as never been pregnant but a friend of mine has a wonderful Facebook group that I think you would like and benefit from called Keto Babies.

We use keto before, during, and after pregnancy. Whether you're trying to improve fertility, lose weight, maintain a healthy pregnancy, breastfeed, heal a postpartum body, or anything else, we got...

My wife was doing keto for about 3 months before she found out she was pregnant. For her, the nausea was pretty bad in the first trimester, and the only thing she could eat was toast with peanut butter in the morning. We tried doing a keto version but the nausea continued so she eventually dropped down to low-carb.

What helped was asking herself if it was “fat Mrs. Slabb or pregnant Mrs. Slabb” when she wanted something. Usually she concluded that it was fat Mrs. Slabb and she was ok to pass on it. Granted, that takes a metric ton of willpower for her, so even though she slips from time to time, I’m still super proud of her.

I can usually tell by the tone in her voice if it’s a pregnancy craving. One day she called me on the way home from work and told me she was picking up meatballs for dinner and that’s what we were having. It’s not an odd food, but the way she said it so matter-of-fact let me know that it was the baby talking. haha

Well I’m sorry that you’re going through such a hard time craving carbs while pregnant. I imagine that is tougher than most of us deal with, your body screaming for them probably because of the baby. I read that low carb options are yuck for you so far but these two recipes I really enjoyed. 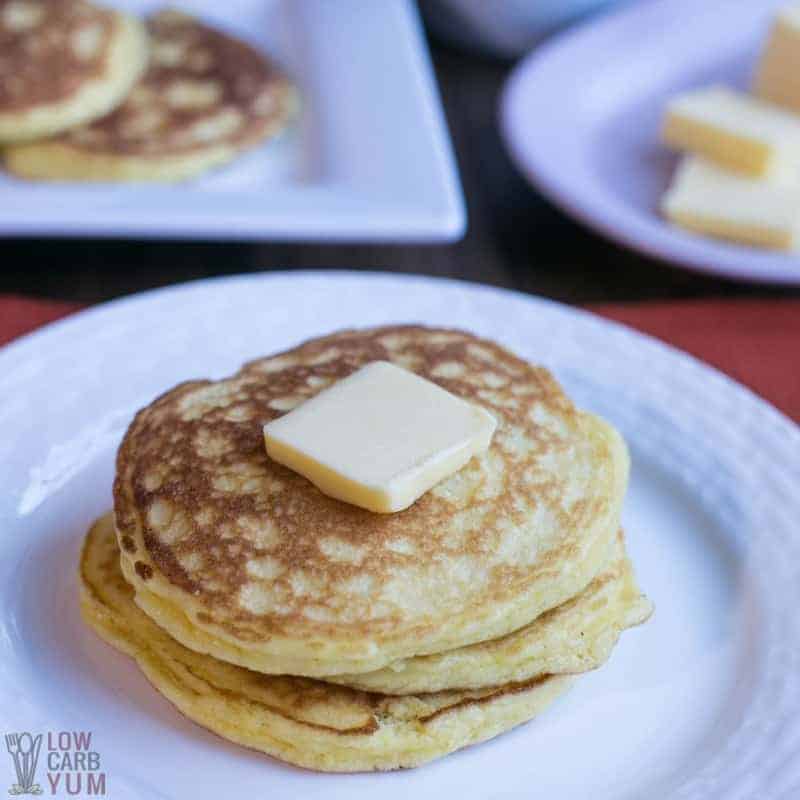 An easy recipe for fluffy gluten free low carb coconut flour pancakes. Such a tasty breakfast treat! Enjoy them with your favorite syrup or eat them plain. 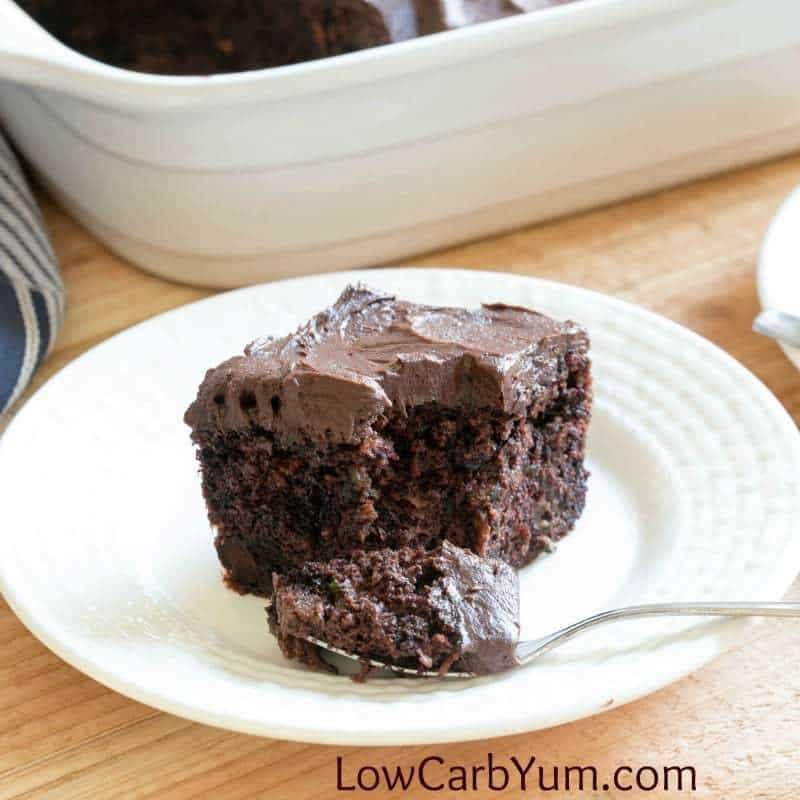 The best low carb chocolate cake recipe ever! Shredded zucchini makes it moist and is well hidden. The kids will never know you are sneaking in a vegetable.

The chocolate cake is awesome and I subbed butter for coconut oil in that one. I made it for Christmas Day and had whipped cream and blueberries on top. The pancakes are good that way too. If you’re ok with sugar alcohols I highly recommend allulose, Hoosier brand is about $16 on Amazon for a 2# bag but it’s the best low carb sweetener out there IMHO.

I have never been pregnant, but I like learning about pregnancy. If your body is craving carbohydrates, would you be able to satisfy and give your body what it wants through whole food sources, like sweet potatoes, plantains, berries, etc.? Probably these are not foods that you are craving, but perhaps the craving is for carbohydrates, which the potatoes, plantains, etc. would provide. I have heard a lot about women craving carbohydrates in the first trimester especially. I am not sure, just speculating, perhaps it has to do with how the body changes in that time and/or what the growing child needs.

I craved carbs in the first trimester of my pregnancies. I also had a lot of nausea but no vomiting. The thought of greens and most meat made me sick. However I was not keto during those times and just gave in. I think the craving was for bland, fibrous food. Maybe try sweet potato, avocado, banana, low-carb tortilla, cauliflower rice? I’m definitely looking forward to seeing how to work in keto when the next pregnancy rolls around.

Sorry, I meant to respond to OP.

Spread the loveIn our sixty ninth episode we talk to registered dietitian and author of Real Food For Pregnancy, Lily Nichols. This episode is packed with information on why most pregnant women today are deficient in necessary nutrients, how you can...

I truly understand about not liking all the keto versions of the carbs… I am the same way usually. However after reading the responses to the recipe I found here on the forum, I decided to give @JustPeachy Sophie’s pancake recipe a try just this last weekend.

Today was the day! After ump-teen test batches in as many weeks, I finally perfected my Oat Fiber Pancake Recipe! Oh hell yeah! They turned out so tender and taste just like, well, the real deal. Not eggy, not like coconut or almonds, just like dare I say wheat? Even my long suffering, non-keto hubby said they taste just like IHOP.

My non keto husband also ate them and actually liked them. He is a pancake man so there is definitely something to be said about this recipe. It is not at all what so ever the nut flour eggy “keto bread” texture. I made a double batch and added a bit of cinnamon and vanilla and used almond milk. I am really surprised that there aren’t more keto recipes that contain oat fiber after having this one. It has a lot of potential for sure. With some sugar free syrup is definitely worth a shot IMO.

Sorry, I meant to respond to OP.

It will still work

but FYI there are two ways to reply to posts (topics) on the forum. It’s the same as Facebook really - there is a general reply to the the OP and then specific threads within it.

If you use the grey reply button attached to a comment you reply specifically to that comment. If you want to just comment in general and/or in response to the OP then use the purple reply button at the end of the thread or the on over to the right next to the purple dot that stays in line with the scroll bar.

Apologies if you knew this already - just ignore

Where to buy oat fiber???

@Keto6468
I ordered mine on Amazon. I bought “Trim Healthy Mama Oat Fiber (Non-GMO Certified Gluten Free)” product because of the reviews. The other Organic brand (and another brand also) had reviews saying it smelled bad and/or bad texture and didn’t want to run that risk trying it out for the first time not knowing whether or not I would enjoy the recipe. This one is actually more expensive than the others, but worked out great.

Thank you, that was extremely helpful!

Haha. I’m in the same situation and it’s driving me crazy. I’ve been keto for almost a year (my husband is not) and I’m fine with it. I’ve lost 40lb and I didn’t ever miss any regular food that I used to eat before this. But now, it’s like I’m starving all the time and I crave everything but healthy food. As much as I understood from my doctor, but also read on different websites, like mommyhood101, this will pass in a while. I found some keto pancakes and keto spaghetti also, but it’s something unexplained because they don’t fulfill my desire. I think, or I hope, in a month or two it will get back to normal. What do you think? It’s my first baby, si I’m not that experienced.