Keto Flu or something else?

Hello all, I’m new to the forum but sure glad I found it!

Am I going through the Keto Flu?

On Thursday I started feeling really fatigued. But I thought it was due to working on my truck in the brutal Texas heat…although it was only late afternoon when I started (90 degrees’ish?).

Woke up Friday AM preparing to go out of town for a quick weekend getaway but had to get my truck running, so more work in the now 100 degree heat while feeling tired from the night before. I’m 49 btw. Got finished and ate a grilled chicken breast from Chik-fil-a and almost immediately threw it up. Took an hour nap. Was exhausted after that, but we packed and left for the cabin. Got there late and went to bed.

Saturday spent 6 hours in the local pool having fun. Got home and was completely wasted. Zero energy and a little sun burned but not really bad at all. But I was so weak, I went to bed at 8pm while my wife and kids wen t and played at the lake a little more.

I slept all night and woke up at 8am this morning. Definitely have some more energy back. Nothing like last night or Friday, but I’m taking it easy and not sure how much I have yet.

So, is this Keto flu I’ve heard about? Can one actually FEEL when one switches from burning sugar to burning fat?

Or was it something from that chicken breast I ate? Or exhaustion from working in the heat?

My diet up till now - Drinking a gallon’ish of water and unsweet tea every day (mostly the tea). Keeping carbs around 10g/day. No cheating. ost 18lbs in 2.5 weeks.

Keto “flu” symptoms are generally lightheadedness, dizziness, constipation, headache, that sort of thing. They are symptoms of low sodium and low blood volume, and they are easily cured by eating more salt and drinking to thirst.

Fatigue is generally related more to the fact that on a prolonged high-carbohydrate diet, the metabolic pathway that metabolises fatty acids tends to be deactivated in most cells. Switching the diet to low carbohydrate intake removes abundant glucose, so the cells, particularly the muscle cells, have to switch to metabolising ketone bodies.

However, the muscles actually prefer fatty acids to ketones (much as some stoves burn wood better than charcoal; ketones are partially metabolised fatty acids, just as charcoal is partially burned wood), and it takes them time to reactivate the fatty-acid burning metabolic pathway. This period of adaptation tends to feel discouraging, because you notice a deterioration in your endurance and strength. But the adaptation period usually only lasts six to eight weeks (sometimes shorter, sometimes longer), and you should notice your strength and endurance gradually returning over this period. You will know you are adapted when your endurance has returned to or exceeded your pre-keto levels. In the meantime, don’t overdo the exercise. No need to stress your body unnecessarily.

Once people become fat-adapted, they generally notice a marked improvement in their endurance, but still find that their explosive power is not what it was. Explosive power depends on glycogen stores in the muscles, which take longer to recover from the switch to a ketogenic diet. A recent study of athletes who had been on a ketogenic diet for two years or so showed that their glycogen stores were indistinguishable from those of carb-adapted athletes, so the glycogen recovery apparently takes somewhere longer than two months, but less than twenty-four.

Painful legs is the initial symptom of very low blood sugar and the cell machinery switching into burning fat.

The throwing up and/or diarrhoea with tiredness is a classic symptom I’ve heard in O+/B+ blood types initially infected with covid-19. It’s best not to confuse covid with keto flu during this time.

Carb withdrawal is a real phenomenon and many folks experience various symptoms for varying periods of time after cutting carbs from their diet. It passes. There is no such thing as keto flu. Ketosis is a natural and healthy metabolic state and highly desirable for many reasons.

From what I gather “Keto Flu” is coloquial term used for all the feelings and symptoms one can get after starting the keto diet. I don’ think anyone’s saying it’s a medical condition.

I know. My issue is that it is not due to keto. It is due to withdrawal from carbs. So let’s just say so.

I wonder how much of it is electrolyte imbalance? I had two 32oz coke zero’s on the way home and felt noticeably less fatigued…

Some folks think it’s pretty much entirely due to electrolyte imbalance. Three possibilities with Coke Zero: possible sodium ‘hit’, possible caffeine ‘hit’ and possible reaction to aspartame. Some folks say consuming aspartame affects them almost exactly like a similar amount of sugar sweetener: rise in glucose followed by a rise in insulin. Then the crash.

A gallon of Coke Zero? Wow! My bet would be on caffeine.

I know. My issue is that it is not due to keto. It is due to withdrawal from carbs. So let’s just say so.

I get the same symptoms if I decide to drop out of ketosis. The symptoms to me indicate switching between carb and fat cell machinery.

That’s interesting and something that probably warrants investigation. I think there is certainly an argument to be made that one’s metabolism prefers uniformity to constant change and changes result in distress to some degree. Although, I think about this in the context of how we used to eat when I was a child in the 50s and early 60s. Standard SAD of the day (lots more sat fat and protein than now), but - and a huge but - we ate only 3 times per day: breakfast, lunch and supper. And generally there were 10-12 hours between supper and breakfast. So we were probably in ketosis prior to breakfast regularly if not every day. That caused zero distress to anyone. No one even thought anything of it.

I have eaten terribly over the past 10 years after a series of events that led to PTSD. Dealing with life with PTSD means you eat what you can when you can. My diet was whatever was easiest which usually meant lots of Dr Pepper and crappy to go food. Some of it healthy’ish, but mostly not.

So now that life is better, I’ve switched gears on my body all of a sudden. I think it’s really pissed at me for the sudden change. I can dig deep and make it through the pain/discomfort, but I do hope it goes away soon.

Electrolyte imbalance and carb withdrawal seem to have almost identical symptoms, so I’ll be having an electrolyte packet with water and upping my carbs a hair until it passes. Then slowly reduce cards to where I want them.

Not sure what else to do except quit the diet. And that ain’t gonna happen. 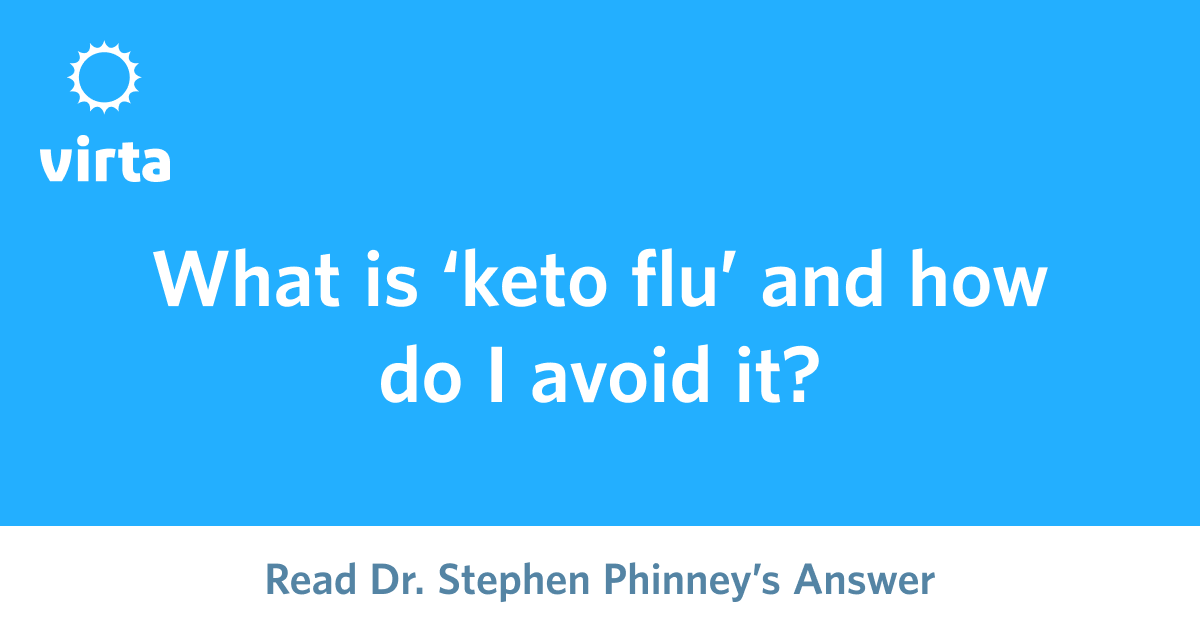 What is ‘keto flu’ and how do I avoid it?

Nutritional ketosis flu, more commonly referred to as keto flu, may occur in the beginning phases of nutritional ketosis as you are dramatically reducing the amount of carbohydrates you are consuming. No need to worry though, this is not actually the...

We each do what we can however we can. The important thing is not to give up. One day you will thank yourself you stuck it out through the temporary discomfort. Before keto, I ate pretty much the current rendition of SAD with a minimal amount of cooking. I had plenty of fave carb-loaded foods covering the full gamut of the food pyramid heavily plant based. I guess I drew to the luck of the genetic draw in that I had no particular metabolic issues as a result.

I started keto with a 4-day water fast. I then dropped everything cold-turkey. I’m a ‘go for broke’ kind of guy and I figured it was easier to dump and restart than ease off over time and endure extended agony. I expected it would be difficult, but it proved easy. I never missed any of the carby foods I gave up, never went through any withdrawal symptoms and enjoyed keto foods immediately. Fear of fat took a little longer to get over! I am convinced it was the best thing I ever did for myself. I think you will, too, however you make the transition.