Keep breaking keto on and off for a year. any advice on how to stay on keto better?

I know you trust me implicity lol…but I did tell of my condition at the time: 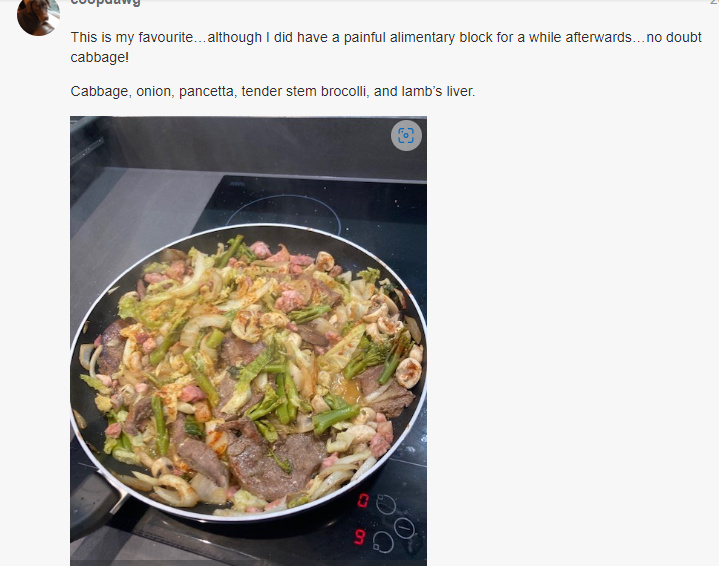 Alimentary canal blockage…reminds me of A level Biology.

Trust me mate- there was nothing kinky or pleasureable about that blockage.

Who is A.A? Lately havent been able to enter ketosis as fast as before. Odd. Before 3 days without carbs would diminish blood glucose significantly and rise ketons. Riht now after 4 days of no carbs glucose still around 5. And ketones 0.5 something.

Generally GP has exhausted all the knowledge and interest in trying to help. Going from specialist to specialist, that seems to be competent. Most doctors seem to have a checklist of 5-10 things. The first 8 get ruled out doing anamnesis and the last 2 require assessment and after that there is only token effort. By prescription of medicine that affect the symptoms only.

Let’s have a look again mate. hang on.

I think diet, without knowing too much else.

if you are UK, ther is a push to get people scanned for bowel cancer.
If you live in UK, and watch the news, you could not have failed to notice it.

Still, there are long waiting times. I’ve been ‘bleeding out’ for years.
It took me years even to get a liver scan after the bloods results.

What I’m trying to say is…you have to help yourself.
In education and action.

A.A. is a fellowship of recovering alcoholics, called Alcoholics Anonymous.

People always say that the second time around on keto is more difficult. But serum ketones (β-hydroxybutyrate) of 0.5 or better is the definition of nutritional ketosis, so you actually sound okay. Bear in mind, also, that circulating ketones represent the gap between production and consumption; there’s no real way to determine the actual levels of each.

Hunger is just a warning signal… That if you FAIL to eat in the next 30 minutes… Your body will be forced to DIGEST BELLY FAT.

Maybe this is contributing to my problem (not being able to take off the last 10 lbs., mainly belly). I don’t like the feeling of being “hungry,” and I usually succumb to it by eating something vs. doing something and letting it go away.

I would suggest it likely is.
When I learned that from Dr. Fung’s group (I was a client, and they said it differently, that became my SIMPLER wording, as it’s a reminder that it is WHAT MUST happen!)…

My current motto is: Quit or HIIT! (Quit Complaining/Jonesing for something, or do a 5 Minute HIIT routine). I am always amazed that when I am hungry, doing exercise quells the hunger and provides me immediate energy. It’s SO BACKWARDS to how we live.

It’s also a great exercise (ignoring the hunger feeling), to show it that “Excuse Me? I will eat on my timeline… Not yours! Your job… Make energy… My Job… Consume Energy!”

This definitely helps with the Mental game… And this quickly becomes 90% a mental game!

I am old enough to remember when the advice for staying thin was “Don’t eat grains, starches, and sugar, because they are fattening.” It was only after we developed our fear of arterycloggingsaturatedfat that carbohydrate became a health food. And thus, to try to prevent us from getting too fat, the advice had to be changed to “Eat less, move more.” The success of the strategy of eating lots of carbohydrate and trying to starve ourselves has not noticeably succeeded.

My personal experience is that when I overeat, I don’t put on fat, but my metabolism revs up and I start sweating more and urinating more. In other words, to some extent the body is capable of wasting energy when we give it too much, just as it slows down the metabolism when we don’t give it enough.

That may work for you, and good on you!

That wouldn’t work for me, all that HIIT stuff.
Yip, chores, cycling, dog walking worked for me, and still does.
And helping people on site by going back on the tools (which I love).

But exercise doesn’t cut the mustard. Do you know how long you would have to run on the treadmill to burn the calories of a 200 kCal choc bar?

It’s all about diet…but also important to exercise oneself.

I have lived in UK for a while so am familiar with the healthcare system there. However right now i am back in my home country Latvia where the waiting tome is not as bad.

@coopdawg I think you glossed over the point. I was not talking about EATING and HIIT.
I was talking about choosing between JONESING and doing doing HIIT. Quit Jonesing for something (realizing I need to change my STATE OF MIND), and DO Something.

I’ve re-read my post. I don’t see what you are responding to?

But exercise doesn’t cut the mustard. Do you know how long you would have to run on the treadmill to burn the calories of a 200 kCal choc bar?

I never suggested such a thing. Read my post.

Here’s the deal. 90% of the time, I don’t do the HIIT. I am just reminding myself I have 2 choices. Quit jonesing, or DO something I would rather not do. It’s my choice. (I could have made that more clear, in re-reading).

Paul, I know people like you. One fella in college would eat a whole pizza. Then for the next 4hrs, you could FEEL the heat radiating from him. He was BONE THIN.

I am the eat too much, go to sleep type person. (Nearly instant fat storing mode, or inflammation generating mode).

“Excuse Me? I will eat on my timeline… Not yours! Your job… Make energy… My Job… Consume Energy!”

And my body responds with “Enjoy your loss of balance and vision then.” It does that rarely (maybe because I don’t ignore hunger) and only very temporarily but it’s not fun.
You DON’T not eat when it wants food, ever. At least I don’t. I am a hedonist. (Okay it sounds weird as only I feel my own body.)
And anyway, hunger is a sign to eat. Just like thirst is a sign to drink etc. I don’t ignore these very valid signs.

But things changed. On mere keto, hunger meant I must eat asap. It was soft after fat adaptation but still was moderately urgent.
Then carnivore came and changed almost everything related to eating… Now I have this baby hunger where I can wait for hours… It even may go away, it never happened before, hunger meant I will progressively feel worse and worse.
I still can’t fast properly, I lost that ability when I went “too” low with my carbs but I often am able to avoid a too early meal. Not always.

And I rarely am hungry anyway, I usually have a better reason to eat (need for food or some serious temptation. I may not eat when hungry under certain rare circumstances but these two are impossible to ignore).

There must be a way to lose fat without hunger. I only did it like that in the past as I eat when hungry. It’s, like, my first rule. Even if I occasionally break it now when it’s just borderline hunger. (I actually eat when not nicely satiated, before hunger, that’s my normal behaviour.)
And indeed, I can eat at a deficit on carnivore without any hunger. I just don’t do it long enough, something always happen triggering eating without need, eating the wrong (too fatty) stuff… But I will make it work one day. If not, I just stay fat. Better than not eating when hungry. (No, I don’t like that either. But won’t be hungry. That’s not my style at all.)

But it’s somewhat mental indeed. Whenever I became really determined not to eat (or I had no money to buy food, once), I just stopped being really hungry. Interesting. But that level of determination born from curiosity isn’t easy to get and I couldn’t do that for long term anyway. And losing fat is very very long term as it goes super slowly or not at all (in my life).

Do you know how long you would have to run on the treadmill to burn the calories of a 200 kCal choc bar?

And it’s good we need so much energy just to function. Even though it’s very little from my viewpoint sometimes. But good food choices are effective.
The choc bar isn’t bad because it’s 200 kcal, it’s nothing, I can’t even track that accurately. But it makes me hungry and need to eat a bunch of other stuff, it may trigger desires towards other sweets… Even eating my own chocolate isn’t good as it’s not satiating. Others may afford such stuff (not satiating items), I don’t. Unless I do OMAD, I badly need them there (well the not satiating short term but okay for long term ones) but when can I do that nowadays?

I’m not trying to annoy you, I’m only giving my experience is all.

Plus the fact that losing weight will ultimately be down to diet, rather than exercise.
But! As I stated, exercise is still very important. For mental and physical health.

I’m not suggesting anyone eats choc bars here ffs, Get that through your minds now.

I’m comparing the amount of energy energy used by ‘Business as usual operations’ by the body, anyone’s body, and the energy used up by physical activity.

You want to lose weight? Sort your diet out. By all means exercise more. But diet is key.

It doesn’t matter to me, actually, I react to it anyway. But I reacted to other parts too

200 kcal is tiny, easy to walk off.
But most of us still eat way quicker and easier than exercise using up the same calories… Good that we have a big quota without lifting a finger. And good food choices are key. It’s very relevant if it’s choc bar or something better (though I am sure many people is just fine with choc bars too, well not just that but part of their diet. I don’t get satiated by it well. it may be chicken or butter, it’s the same principle. if it easily triggers overeating, avoid it or limit or pair with something that makes it all better).
Of course, even the exercise itself may bring extra calories when it makes people get too hungry…
But it’s easily possible that not eating the stuff is the worse idea as it helps satiation more than not eating it and not exercising. Walks even helps me with satiation, no food is needed, funny. I totally should exercise for multiple reasons, having a more okay energy balance is only one of them.