Is there ANY psyllium husk brand that doesn't turn purple?

Does anyone know of a brand that for sure doesn’t turn purple? I don’t care when I eat alone, but I want to share the Diet Doctor keto rolls with friends and I would love if they actually looked like bread and not some weird moon-stone.

I use Konsyl unflavored from WalMart. And you might want to try using the whole eggs in your recipe instead of just the whites. It lightens up the bread really well and who the hell doesn’t like the goodness of the yolks! 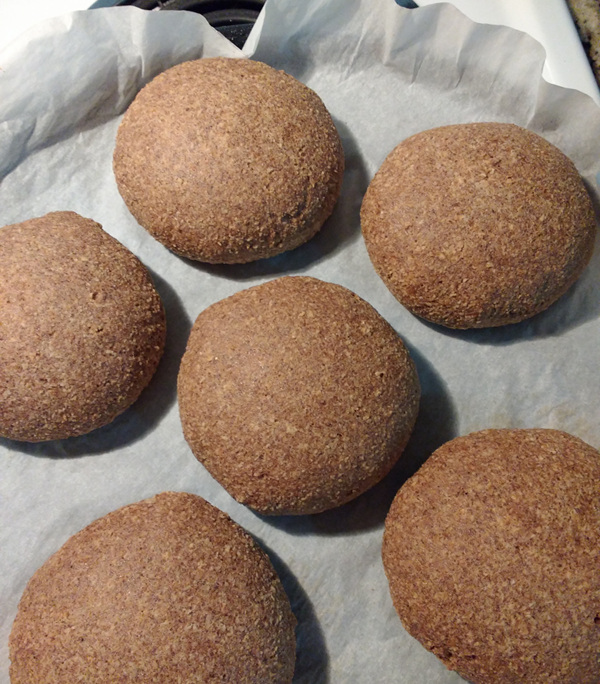 See how beautiful yours are! I’ll try the whole egg trick. I usually use carton egg whites.

Do you buy the Konsyl in the food section or pharmacy aisle?

Do you buy the Konsyl in the food section or pharmacy aisle?

In the Pharmacy and I pay around $11 for a jar of it. Be aware that when you use the whole eggs it does make the dough stickier. I’ve also used nutritional yeast (2Tbs.) with good results for a slight cheesy flavor. Currently, I’m using powdered cheddar cheese. Really Good! I love these bunz and everybody who’s tried them like them too. Good luck with your friends.

I made my first (and only, so far) batch of keto bread using Konsyl that I bought at the pharmacy (Walgreen’s).

Thanks for the tips. I like the color purple but not in breads.

Yep, there is more to it. Here’s the recipe:

You’ll have to try the butter and get back to us!

Me, I’d do butter for the taste. You might want to cut back a bit on the water.

But actually, I just put lots of butter ON this bread after it’s cooked.

But actually, I just put lots of butter ON this bread after it’s cooked.

). I’m goin to explore this further now that we are moving into comfort food season. Chicken and “rice” may be my next casserole venture using one of these. And toasting the bread crumbs might work well too!

Wes at HighFalutin Low Carb does a wonderful Southern Stuffing. I did it twice last year for Thanksgiving/Christmas. It is a bit involved but the taste is totally worth it, even the naysayers loved it, so it’s slated for a repeat this year. I can’t help ya on the bread pudding though since that was never really on my radar.

I can’t help ya on the bread pudding though since that was never really on my radar.

It wasn’t on mine either before just a month or so ago. There was a Habitat for Humanity event happening in a town near here (Cookeville) where people could buy a “bowl” and sample anything on the street. There were probably 100 booths set up with lots of different kinds of food, mostly Cajun for this particular theme. My wife’s company had a booth set up that served bread pudding with either a vanilla sauce or a rum sauce. (I doubt there is any question which sauce was the most popular! They were both good.)

We spent most of the day before making 18 large pans of it. Real cream, real butter, real eggs, real sugar and a lot of stale bread. It wasn’t all that tempting making it but when the crowd slowed just a little, I had a taste. DANG, that was some good stuff! And with the rum sauce… DANG!!! Let’s just say we did not have one scrap left over. People were lined up for it. Even had one guy shout out that we had “crack”. LOL!! No, it wasn’t crack, but the rum sauce was a big draw.

Anyway, since then, I’ve wondered if I could make something that was keto friendly. I think I could. But the bread part of it seems like it would be the hardest.

I’d just brush melted butter on the rolls before placing them in the oven to get the right texture to the rolls. These form a nice crust, but pretty thin. Which is fine for dinner rolls.

You can try cutting back on water and adding melted butter or oil but I really think your better off not doing that if you want a really authentic dinner roll experience. Report back if you do it. I’m currently fasting or I would do it myself, but fasting and baking don’t go together too well.

I’ve been thinking of mixing these keto rolls and one of the “corn bread” recipes for dressing. It’s time for me to get in there and BAKE!

You really should try the HighFalutin’ one! It’s friggin awesome and tastes just like the real thing. I think it’s because almond flour mimics cornmeal so well.

OK, what’s the easy, obvious way to copy the link for an embedded video (which I haven’t found - DOH!

EDIT: DANG! I just touched & held and the darn link popped up. I must have a defective finger…