I pushed through the hunger and I’m in better shape a few hours later.

We’ll see where this goes…

Woke up feeling better. Lot of stomach grumbling but no hunger just yet. I feel different - lighter, emptier. My weight is the same but the sensation is that I have less food in me and my body feels easier to move around.

I have this feeling when I fast for a week or so… so it’s unusual to feel it on normal eating times.

I also feel stronger and tighter. Again, I’m using descriptive terms that may not make a lot of sense but I’ll try to explain. I feel my core almost constantly activated. When I was fat, the fat braced my midsection and joints. Even though my bf% hasn’t changed, I do feel like my body is more muscular and vascular. I see veins starting to show more.

In terms of tightness, I would describe it as the opposite of feeling bloated.

Today is the first of three pseudo-fasting days where I use a protein only shake. This would cut my caloric intake from 2000 to about 1000 mostly coming from the >200g of pea protein & nuts powder. There’s ~35g of fat unfortunately but that can’t be helped. There’s no better source of vegan protein that I found. Best morning glucose and ketone readings since I started high protein. There was definitely a protein adaptation window for me.

Weight and lean mass basically flat. I may need to add cardio to increase metabolic rate. Maybe this weekend to avoid overlapping with my pseudo fasting

Heading to lift… it’s a pull day… back, biceps, shoulders

Last time I pushed deadlifts, I ended up straining my lower back. I’ll try again today but I’ll be more self aware…

Confuscious say, if you need to fart during a deadlift, just let it happen.

This is the lowest pre-workout glucose and highest ketones on this phase.

The hunger is more of a mild nausea? I’m having a hard time describing these sensations because they’re different than what I’ve experienced on keto or SAD dieting.

To be clear- it doesn’t feel bad. It’s just different. It’s a mix of what I feel when fasting and when I’m on keto but not like either. I’m calm, focused, strong, and I have consistent energy. Not as good as fasting but getting there.

I’m satisfied after eating, like keto… but with this mild nausea / hunger with a tight core and almost a feeling like my gut fat is being mobilized?

You’re a guy, those things are seemingly allowed. I’m still like 10 years old, because people in my Pilates class would fart all the time, and sometimes they’d make a certain sound and I would really have to cover my mouth to not make an audible laugh.

its all about taste! nobody cares about noise!

(Ruby is goofy with floating point) You should pierce your nipples, for science!

200g of protein powder was difficult to manage. I don’t think I can do that again.

I’m going to try an alternative protein only approach tomorrow:

and then for Friday, I’m just going to throttle the protein back

Here’s the progression and plan based on my analytics: Some of the predictions seem accurate thus far. Or am I reading the graphs totally wrong?

yes. I made some small adjustments to the coefficients to improve the fit 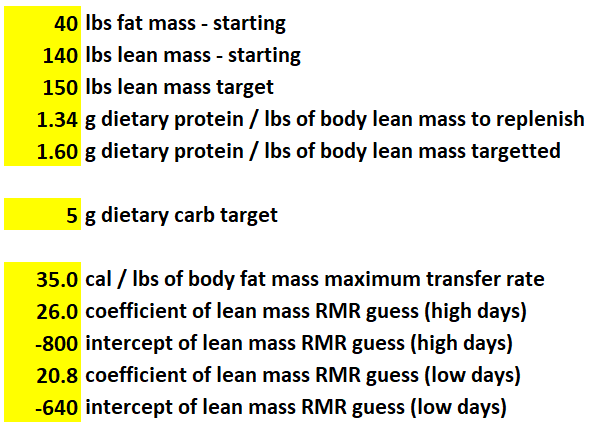 both are reasonable estimates so it’s still meaningful… I am dialing in based on historical data and then using that to project forward.

the future is based on very controlled dietary macros… and as you can see, my historical macros are “chaotic” in contrast

I hope you at least got the tuna cans with the pull-lids. I was eating like 6 cans of tuna every few days, and what made me stop were the stinkin cans. I got so over opening them and draining.