So, since this is the science category I’d like to do a little experiment.

I’ve started Keto on January 1st and I happen to use an Apple Watch.

I monitored my heart rate during the adaptation period, and I was really surprised. My resting heart rate was hovering around the 90-100bpm almost all day. I even put on the watch during bedtime to monitor my heartrate and it was the same levels.

Now I’m 6 weeks into Keto and my heart rate is back to normal. It is in the 67-75 range while resting.

I find this very interesting and didn’t notice anyone talk about this, so I wonder if I’m just an N=1 or if there are other people starting out that can provide similar feedback. Any Smartwatch with a heart rate monitor would do just fine.

Any theories what it could be related to?

I’ve heard this mentioned several times in FB groups. According to Ellen Davis (in her new book) it can be a selenium deficiency or other mineral, hypoglycemia, dehydration or a reaction to coconut oil or MCT.

There was a podcast/study/post or the like that @richard was nice enough to enlighten with that stated the heart is roughly 28% more hydraulically efficient while running off of ketones. @Brenda has a deranged ticker as well. Heh, sorry guys

Maybe this could be a factor? I know my heart has been on vacation the last six months. It wakes up if need be because of adrenaline or what not, but just does it’s job otherwise.

I find this very interesting and didn’t notice anyone talk about this, so I wonder if I’m just an N=1 or if there are other people starting out that can provide similar feedback.

Absofuckinglutely! I did!!
This was one of the amazing developments that happened to me when starting keto.
I’ve always had an unusually fast RESTING heart rate. 112-115. I never liked it and was always envious of a 70-80 resting rate.

The ketogenic diet changed all that. My resting heart rate is consistently in the 80’s now, and even 70’s when fasting!!

Yes me too! Unusually high pulse rate most times - go on keto and it stays high - and then settles down in the 70’s or 80’s once fat adapted.

In fact I get so worried or embarrassed about my weird pulse I sometimes avoid donating blood at the blood bank because I get sick of having to explain, don’t worry it’s always like this!!!

What about blood pressure?

Mine is always normal!

Mine was definitely elevated for the first few weeks. Now it’s back to “normal” for me and between 65-67 resting according to my Fitbit.

My blood pressure has been high for 35 years. Two months in, I was able to halve my meds. Now 2 months this more, and it’s getting low again. If it stays where it is today, 110/72, I may get off bp meds altogether… Woooohooooooo!!!

I just had my blood pressure taken yesterday at the Dr. and it was 92/63 and my heart rate was 71. Pretty good!

Though I do sometimes wonder if my low BP is why I have difficulty fasting more than 48 hours, even with really good hydration and lots of salt.

When I first went into ketosis my heart rate was quite High. After about a week, I found myself in more normal ranges. I’m not sure what causes it, but I think has something to do with changing from a sugar burner to a fat burner.

What about blood pressure

Mine is normal now. 3 years ago when before I started keto I was hypertensive (high blood pressure)

sick of having to explain,

Oh lord, I hear ya. Those “looks” I would get, as if I were a freak. My heart rate has been unusually fast since my teens.
I suspect insulin resistance started in my teens even though I was slim and athletic (swim team, track, motocross , barrel racer w/ a quarter horse) I was strong as hell and lean as all get out. I started gaining in my 20’s, diagnosed T2DM at age 36.

Old thread I know, but I tend to find when doing keto that my heart rate is initially higher, sleep more disturbed, and BP is higher for about a week. For example:
Resting HR pre-keto: ~55bpm
Starting keto: ~62bpm
Week later: ~55bpm

In cardio, where it counts, I find high intensity interval training initially compromised until keto-adapted. This usually takes the form of unable to complete my last couple minute sprints on the treadmill at 10mph. After a week of adaptation, this is restored and I find I can do so as well as air it out for a longer continuous run at 70-80% max effort with greater ease than not on keto.

I don’t tend to do keto for more than a few weeks at a time and tend to do a more typical intermittent fasting (IF) approach most of the week (skipping breakfast) along with high carb eating 36-48 hours post weight training before back to IF. I find this works well for me (late 30s, male, ~10-12% bodyfat) in terms of preserving muscle mass and physique. Going keto for a few weeks drops me under the 10% bodyfat and the linea alba becomes visible turning my 4 pack to a 6 pack, but overall performance at the gym WRT strength training tends to suffer. The personal records become fewer and eventually stop.

In summary, I think my HR and aerobic performance is generally better on keto after a week of adaptation, but tend not to do keto due to the slightly negative tradeoff with strength gains.

I’m a s similar note, when fasting for more than 2 days, my heart rate goes to 50 or below now. 20 years ago, I was an athlete with a resting heart rate of 38

Absofuckinglutely! I did!!
This was one of the amazing developments that happened to me when starting keto.
I’ve always had an unusually fast RESTING heart rate. 112-115. I never liked it and was always envious of a 70-80 resting rate.

The ketogenic diet changed all that. My resting heart rate is consistently in the 80’s now, and even 70’s when fasting!!

@Brenda How long did it take for your heart rate to go down? Mine is just as high, and it has always bothered me like crazy ( I also work out quite a bit, so can’t blame it on being sedentary either). I have been keto for over 9 months now (years on low carb before that). I know I am fat adapted, with ketones consistently between 1.8 and 3 (except when I fast when they are between 4 and 6), but my heart rate remains just as fast. I guess i just wanted to know if it took you longer than this, maybe i still have hope.

How long did it take for your heart rate to go down?

As soon as I was in ketosis I noticed a change. My heart used to race when I was a glucose burner, even at night as I was trying to fall asleep. That stopped with keto. I guess I didn’t fully realize I had a more normal resting heartrate rate until I started tracking it closely. About a year and a half ago. It gets even lower when I fast. I checked last night too. This makes me VERY happy!!
I bought this pulse oximeter last year ($15 half price online) Recently my son showed me that my Galaxy s7 edge cell phone has a pulse oximeter on it! Who knew??! Not me! 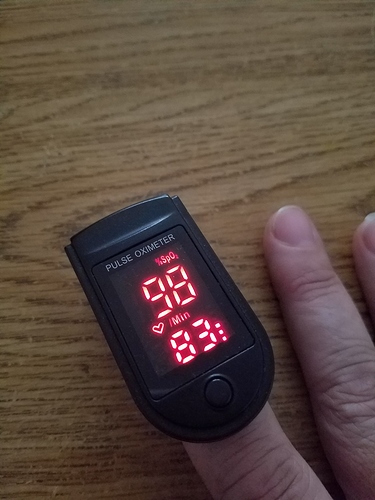 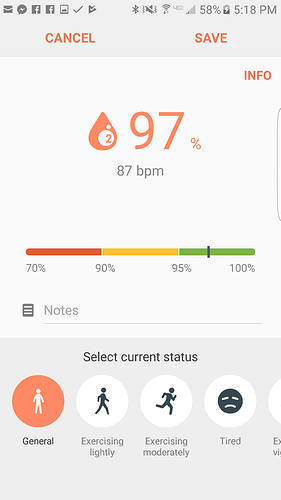 The Oura ring tracks HR during the night, and lowest rate achieved in the night. Easy way to gather data.

I am in the adaptation phase and my heart rate is up which is why I did a search to find out if that was normal.

My resting heart rate is normally 41-43 bpm, and I was paleo, not keto. I cut my carbs down to 15-20% and my heart resting rate spiked to 53 (I know, but its high for me). It scared me the first time so I went and ate some clean carbs :D. I’m going to still with it (its been about 2 weeks), measure keytones, and let you know how it goes.