Small stuff here, big ones in their own threads, maybe?

For dinner tomorrow - will report back with pictures!

Chuck roast tender, flavorful and cooked about medium. Delicious. I left it in the sous vide bath for about 27 hours. Browned in ghee in a cast iron skillet on high heat. 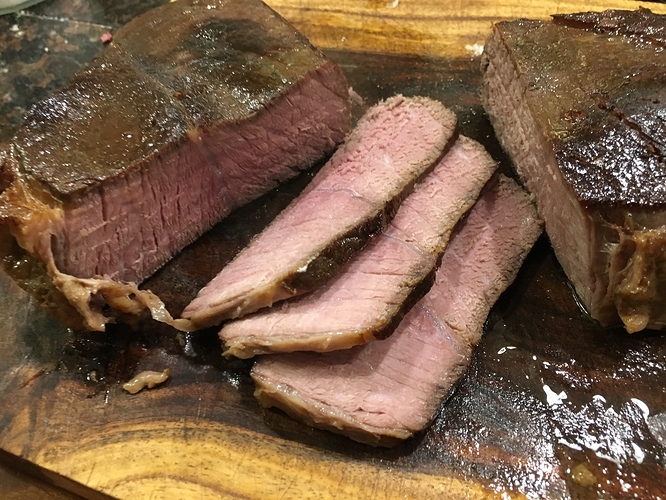 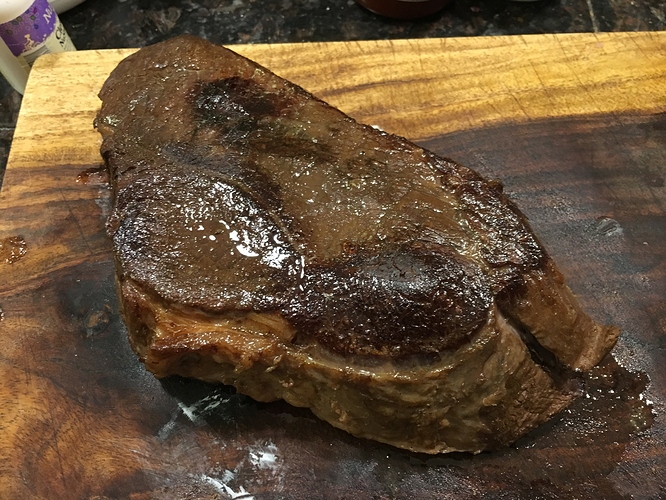 I drained the juices into a saucepan and then dumped it into a shallow bowl. 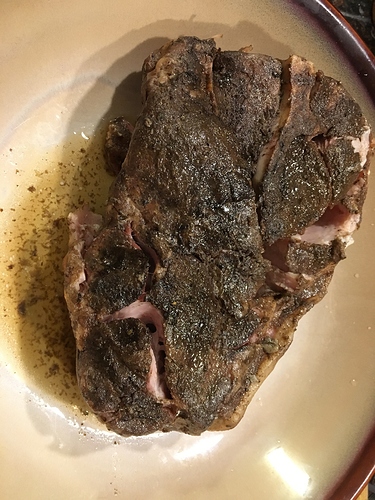 Then shredded it - was the most tender, moist pulled pork ever. I’ll mix up some low sugar BBQ sauce for the leftovers. 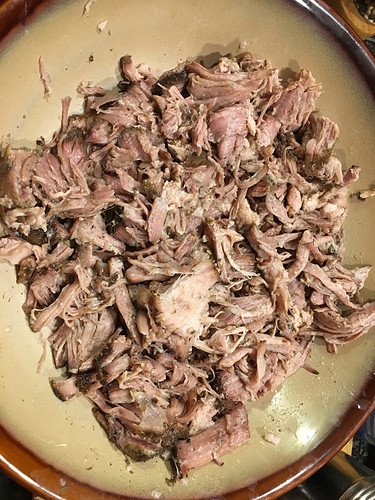 Found a large leg of lamb that was originally over $40 and marked down to $18 after Christmas.

It was labeled semi-boneless and I wasn’t sure what that meant until I opened it. It had the bone and then a large section on the narrow end that was boneless. I cut off the boneless end and then cut that in half for 2 small portions. Vacuum sealed and froze the boned part which is large enough to serve when I have my neighbors over. One of the small boneless pieces was also vacuum sealed and frozen.

Edited to add: went with 133F for 24 hours and I couldn’t even slice it since it was so tender - just fell apart. Perfectly cooked inside.

Found a large leg of lamb that was originally over $40 and marked down to $18 after Christmas.

Boneless and skinless chicken breasts, 144 °F or 62 °C for just over 2 hours. These were big, thick breasts, and they ended up very slightly pink inside, just on the edge of recognition. Briefly seared in a hot pan with butter. Eye-openingly juicy and good.

For many fairly tender meats, a cooking period of 1 to 4 hours is often given. Thus far I’ve been going somewhere in the middle, and like the results. I’ve read that people are used to chicken cooked at higher temperatures, the meat being more ‘stringy,’ and that it’s not necessarily a bad thing - lots of people like it that way. Might go a couple degrees hotter next time.

Also have read that chicken really doesn’t expel much water at lower temperatures; that it kicks in somewhat around 140/60 and that by 150/66 it’s much more pronounced. 150 means roughly 3 times as much fluid lost, and this includes some fat coming out, where at 140 it’s not much of a factor at all.

Experimenting is part of the fun, I reckon. It’s hard to make stuff “bad” so much as just different.

Experimenting is part of the fun, I reckon. It’s hard to make stuff “bad” so much as just different.

For sure. The smoothness of the lower-temp sous vide chicken does take some getting used to.

Thus far, I think pork chops have been the best thing we’ve had, sous vided. Followed closely by ribeye steaks and the chicken breasts, and we are still talking mind-numbingly good, here. I haven’t tried herbs or spices during the sous vide portion, just mostly salt and pepper, maybe a bit of garlic salt or garlic powder when we sear.

I cut my own pork chops this week, making them thick enough that they will stand up on edge (or are easier to hold with tongs) for searing. The fat around the edge of the chops melts a little - so good!

My wife is out right now, procuring some filet mignon…

Filet Mignon or beef tenderloin - 135 F / 57 C for 1 hour. Then seared in a hot frying pan with butter. Had the little steaks really dry - took them out of the sous vide bag and patted them dry with paper towels and rolled them up and squeezed them in the paper towels. Nice and dry. 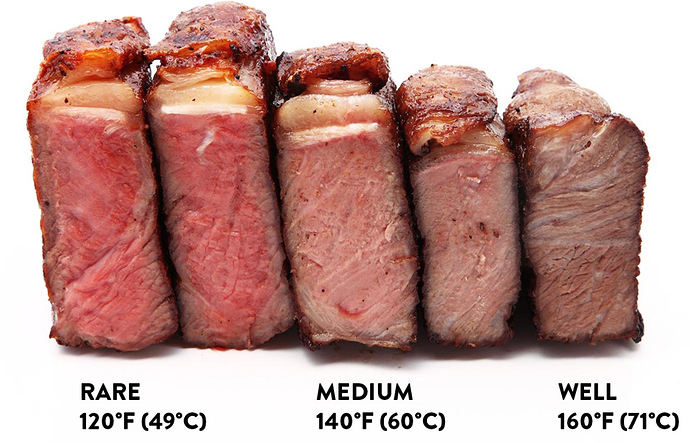 I had my wife pick what she wanted from this picture. Figured she’d go with 130/54 degrees, since she’s usually a ‘Medium Rare’ person, but she said 135, and that proved to be perfect - these were thick little beasts and the color was even darker pink than the second from the left. I took my time searing them, and perhaps didn’t have the pan hot enough in the beginning - it seemed to take a relatively long time, longer than for pork chops or ribeye steaks, but the result was great: nice char on the outside - a remarkably thin “skin” of charred meat with all the rest uniformly pink/red. I think it would be hard to mess this deal up.

I think it would be hard to mess this deal up

Yeah, the hotter the pan is, the better, I’ve found. But not so hot that the building smoke detector goes off…

I’ve recently switched to a thick bottomed stainless pan, from my cast iron for this reason. The seasoning would burn off every time I cranked the heat for a while. My pan is also much happier.

I’ve seared stuff in a pan as well, but it doesn’t seem to have the same results as when I sear anything over flames. (Plus, the butter seems to burn too quick and the pan itself can be a bit of a mess something once done. … But my biggest issue is that I really hate lighting up a huge grill just for this. Wouldn’t be bad if I had a bunch of stuff to cook up, like when we want to cook a quantity of food in advance or for a get-together.

I remember seeing a device a while back, that simply allowed one to place their food in it, and it had flames from top and bottom that you can adjust. But it seems it’s primary design was for searing food. But damn if I can locate it now? … I’m actually still looking, since I’ve been trying to show the wife after us speaking on it.

If I ever do locate it, I will post it here. But I would love to check one out.

I just sear with a very small amount of avocado oil. Butter is not a good fat for searing. I’ve heard ghee is ok. Most restaurants use a salamander broiler to finish steaks

Yeah, might have to try that. - I’ve never personally used AO or Ghee. I know I’ve read some things mention don’t do well with high heat, and yep, butter was one. But I really didn’t have anything else on hand, and have been using the grill mostly, which does get hot enough, but it is a bit excessive for simply this.

Will check, but think the Salamander Broiler is indeed one of the devices that pulls up when searching. Thanks

Ghee is good, as the milk solids are gone, and they’re what burns at the lower temps.

Plus, the butter seems to burn too quick and the pan itself can be a bit of a mess something once done.

I often put the meat in the hot pan, then add butter at some point, to give the searing a chance to get underway first. Fatty meat will render some fat out fast, making its own oil. I will say that we’ve never noticed anything objectionable with beef, and with pork and chicken the browning butter makes sort of a ‘Buerre Noisette’ sauce that’s good with salt & pepper.

I should quit being lazy and make some ghee.

Super-easy, I’ve made two lots in the last 24 hours

I often put the meat in the hot pan, then add butter at some point, to give the searing a chance to get underway first.

That makes since, and would help as well. I usually get my grill between 500-600 before added the meats and keep it around 600+ while searing. … But like I said it’s a big grill, so it’s ok when I have quite a bit of cuts to do. But most nights, it’s usually just 4 or 5 pieces, which only really needs less than 1/3 of this space, if that. (I’m still looking into a small Hibachi Grill, but it would take longer to heat up the fire for this?)