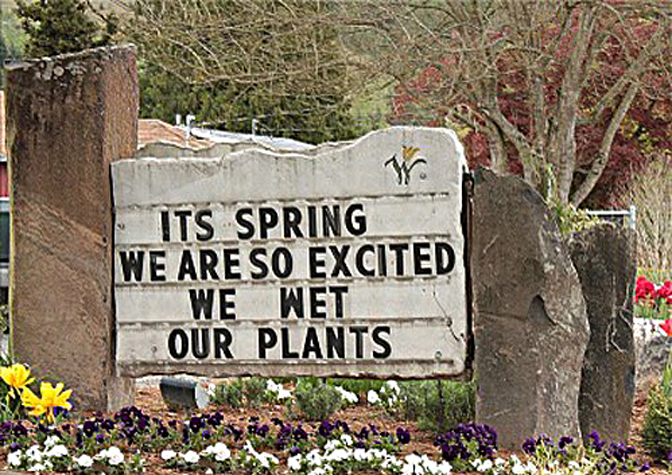 As a semi-retired professional gardener, I feel like bent backs and muddy fingernails don’t get the respect they deserve. FitBit doesn’t even acknowledge us, we’re like disavowed children on Jerry Springer. True, we’re more resistance training than aerobic exercise (unless you’re pushing the mower while running from a bee) but that can really add up. As my lower lumbar will attest.

Last year, I moved over two tons of large landscaping bricks in my own back yard to create a raised patio/path. Right now, I’m on load 7 of 9 (calm down, Star Trek fans) of soil I’m using to raise parts of my garden. I’ve got about a dozen major projects going at once and they all have to happen before The Heat, which in Portland, Oregon, typically ensues on or around the Fourth of July, so it’s crunch time. As my lower lumbar will attest.

Where are you in the world and what’s going on in your yard? Get your garden club card punched here.

That sign is hilarious!! I’m in the Midwest, cloudy, rainy and low 60’s.

Where are you in the world and what’s going on in your yard? Get your garden club card punched here.

In northern Arkansas and spring in full bloom - daffodils and redbuds fading - dogwoods and iris budding up.

Tomatoes, squash and cukes in my greenhouse ready to be planted in the garden, but going to wait 2 more weeks to make sure no chance of frost. I’ve been fooled before with mild spring weather and then get a late cold snap. I’ve been babying my plant babies for 8 weeks, so not gonna take a chance!

Connecticut is just starting to warm up. There is an annual dogwood festival in our neck of the woods, but it’s always hit or miss, whether the dogwood will have finished blooming before the festival starts, or if the blooms won’t even have begun to open yet. Today was our first day of weather in the sixties (Fahrenheit), and my sister is eager to shut off the pellet stove for the summer. However, some of the worst blizzards in the Northeast have happened in April, so . . .

At least the daffs came up a few days ago. The croci, crocusi, whatever are up, but only one of them has opened, so far. Other people have blooming forsythia already, but ours hasn’t popped yet.

Australia. Canberra to be exact.

There is no greater workout for me than moving a large mound of something, bucket by bucket or with a barrow. I get a thoroughly good tired feeling afterwards.
Mattocking some persistent weeds by hand is a close second. The other benefit is all that sunshine and outside air and plants. Nature!

There is no greater workout for me than moving a large mound of something, bucket by bucket or with a barrow. I get a thoroughly good tired feeling afterwards.
Mattocking some persistent weeds by hand is a close second. The other benefit is all that sunshine and outside air and plants. Nature!

Australia. Canberra to be exact.

So you’re moving into autumn, then. Are you far enough north to stay warm all winter? Do you get snow?

don’t like gardening…but yea it is a workout for sure! So unless someone is behind me cracking a whip I don’t ‘do gardening’ of any kind mostly now. Did some younger, found I didn’t enjoy it LOL

I was forced to put some mulch out across the front of the house this spring cause it was looking more bare and old and funky like, so we refreshed it and yes, it is WORK, a 4 letter word to me, but I used my kid and made her do most of it. heehee

I think with all the farming we did thru the decades, crops on many 10s of acres for our farm biz, just made me start to dislike anything like landscape work and more. I do enjoy a bit of flowers in containers for how pretty they are, that is my extent of gardening now.

Yea! I am digging a 100 foot ditch with pick and shovel for a drain pipe from the house for draining rain water from house gutter drain spout to lower point on property. Loving it.

Sometimes a dusting of snow in Canberra, some falls on surrounding hills every winter 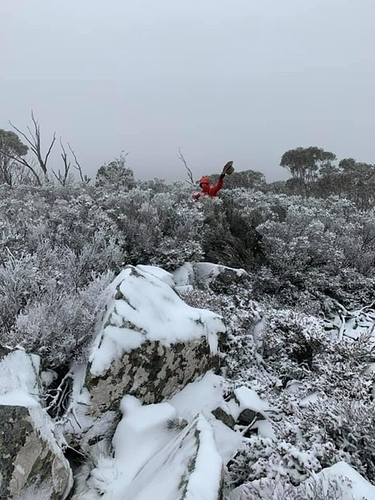 This is from a walk last winter, 20 minutes drive from edge of the city

That makes sense. I finally thought to check the map, and you are at about the same latitude south as North Carolina is north (I hope Canberra doesn’t get as humid as the Carolinas do!). Of course, my geography is so bad, I only recently learned that North Carolina gets cold enough in the winter for the trees to lose their leaves. I just assumed the climate was balmy year-round, lol!

New York City, being about 42° N, gets just as hot as the Carolinas in the summer, but we get a lot more snow in winter. My location is part of the New York metropolitan area. We get slightly less snow in my city, because we are right on the ocean, whereas New York is farther inland, despite being in the middle of a harbour.

I was surprised to see that even Sydney and Melbourne aren’t at as high a latitude as New York. They are about the equivalent of Richmond, Virginia, which doesn’t get much snow, either.

So, I’m monitoring the radar map for holes in the rain so I can mow the lawn. I spot one, race out, fire up the rusting circa late 80s 3.2 Craftsman push mower, because winning, and manage to rock everything out, front yard and back, despite having to stop several times to chat with dog walkers and pet cute things. You cannot not pet cute things.

Then I notice the light is fading. It’s 3 PM and the light is fading–fast. I look up. An hour ago there were fluffy white cumulus clouds playing in a clear blue sky, but like Shih Tzus with a personality disorder, they were hiding a nasty secret. It went from pleasant to The Wizard of Oz with one strong wind gust and suddenly there were more than fifty shades of grey up there.

I ducked inside and consulted the radar map. Nothing, it showed nothing. One cloud slightly to the south, that’s it. No precipitation, no thunderstorm, no flying monkeys. I changed clothes and ran some errands. I walked into one store on dry pavement and walked back out to find hail piled up an inch in the gutters, shoppers zigzagging across the parking area trying to avoid the gulley washers and vortices developing around drain holes, and several fender benders on the drive home.

There is no greater workout for me than moving a large mound of something, bucket by bucket or with a barrow.

Meet me at my place Sunday morning at 11, bring a shovel. The clay will be good 'n slimy and still weigh ten thousand pounds after that storm yesterday. It’ll be a party.

Naturally my bold assertion was made in the confidence that I’m alone here. Sorry! It’s much too far away!

You have such a way with words

No gardening this weekend because I’m performing at a festival. I can’t help noticing that it’s great not to be at the mercy of food and energy intake like the rest of my troupe. The weather is Autumn perfect here so I’ll be back in the garden next week. Yes we have beautiful autumn colour and leaf fall here

Last year, I moved over two tons of large landscaping bricks in my own back yard to create a raised patio/path. Right now, I’m on load 7 of 9 (calm down, Star Trek fans) of soil I’m using to raise parts of my garden. I’ve got about a dozen major projects going at once and they all have to happen before The Heat, which in Portland, Oregon, typically ensues on or around the Fourth of July, so it’s crunch time. As my lower lumbar will attest.

The 38,000 was 1998 alone, and the other years had lesser but still amounts in the thousands. Tulips, alliums, hyacinths, gladioli, bluebells, cannas, lilies, cilla, iris, ranunculus… Plenty of annuals, too - marigolds, zinnias, poppies, pansies, petunias…

This was on my dad’s property, and now the lone and level sands (so to speak) stretch far away.

WIth the exception of the daffodils/jonquils. Most perennial flowers - in the midwestern USA climate, anyway - tend to decline and eventually are all gone. But the dafodils increase and they’re still there, going strong.

Fast forward 20 - 25 years. My wife got a teaching job 500 miles south, and since 2012 we’ve lived in a Midtown Atlanta condominum. Two years ago we had a morning glory in a pot on our small balcony, and last year a tomato plant.

It’s not quite the same, and I sure miss gardening.

I retired in late 2020, and we’re looking for a house with a little land, so as to garden once again. Covid and brutally increasing prices were/are a thing, and it’s been a long process, but we’ll get there.

Paul, you can even snow ski in North Carolina.

I appreciate how much work that is, I’m collecting bulbs as we speak for my front spread.

Alliums and hyacinths are about the only things animals won’t chew on (highly toxic) so, barring drainage issues, it’s likely the rest of your masterpiece succumbed to being a smorgasbord for burrowing things. But don’t despair because all you need to recreate your spring display at your current domicile is a pot and the lasagna technique. Just stick some cascading annuals (trailing lobelia, petunias, nasturtium) on top when the spring show is over.

Mine is now a container garden, it used to be a jungle of invasive ivy and brambles but I got it overhauled last September and so since then I have been adding containers and being a proper gardener for the first time in my life. My garden is so pretty now with lots of colour and I have found some green fingers I never knew I had.

so lovely to sit outside and not put my head in my hands thinking maintenance all the time but getting nowhere, now I sit , relax and totally enjoy my garden. Nothing nicer than seeing the plants grow and the buds bloom. Especially to see what colour they turn out to be too hahah.