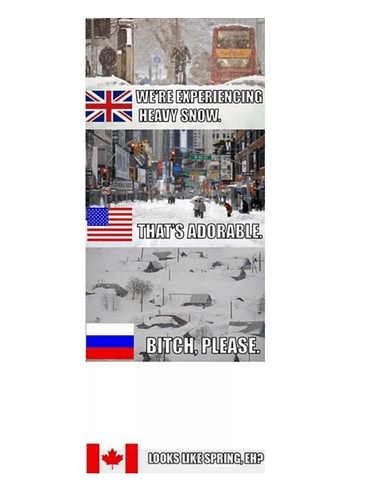 (Not sure why I’m posting this in April, but I like Canadians and their attitude toward weather.)

Portland is a few squares above the UK in that scenario. Half an inch shuts the city down and closes schools, it’s embarrassing.

Well, winter or summer, whether we’re shoveling snow or shoveling ■■■■, it’s all exercise.

Half an inch shuts the city down and closes schools, it’s embarrassing.

Oh so it’s not only Hungary where a dusting slows down traffic?

There is a joke. I hope I won’t butcher it with my quick translation.

Three snowflakes are talking before their fall.
“Where do you want to fall?”
“Some nice hills in a populated area so I can be part of a nice winter playing for the kids!” -says the first.
“I want to be one among the ones who cover the fields, helping the crops in survival!” - says the second and they both look at expectantly to the third one. That says:
“I want to fall in Hungary so I alone can stop traffic!”

I never understood it but really, a tiny snow (that is very normal, well it was in the past) causes some highly unproportionally problems.

My garden? I am not in the mood to write much (lucky you) but it’s pretty now (and cold today). Sour cherries, cherries, pears and normal plums (so not the very big or not noble ones, they are already donw) are in bloom right now. Still have the last daffodils and hyacinths and the tulips started too. Golden chain trees are still in bloom but not for long.

My tiny vegetable patch has young onions, garden cress, garlic and different radishes now. My tomatoes are super tiny, they travel between the sunlit terrace and the house but will be planted in 2-3 weeks.

And my absolute favorites are my pansies, they are awesome. Poor things survived a (for us) pretty thick snow in the 3rd of April… It melted immediately but still… (My sprained ankle still didn’t recovered. Don’t go out in slippers when there is melting snow outside.)

Oh and it’s a tiny thing, a very plain common daisy but I actually didn’t get them with the house, I worked for them and now I have them galore… 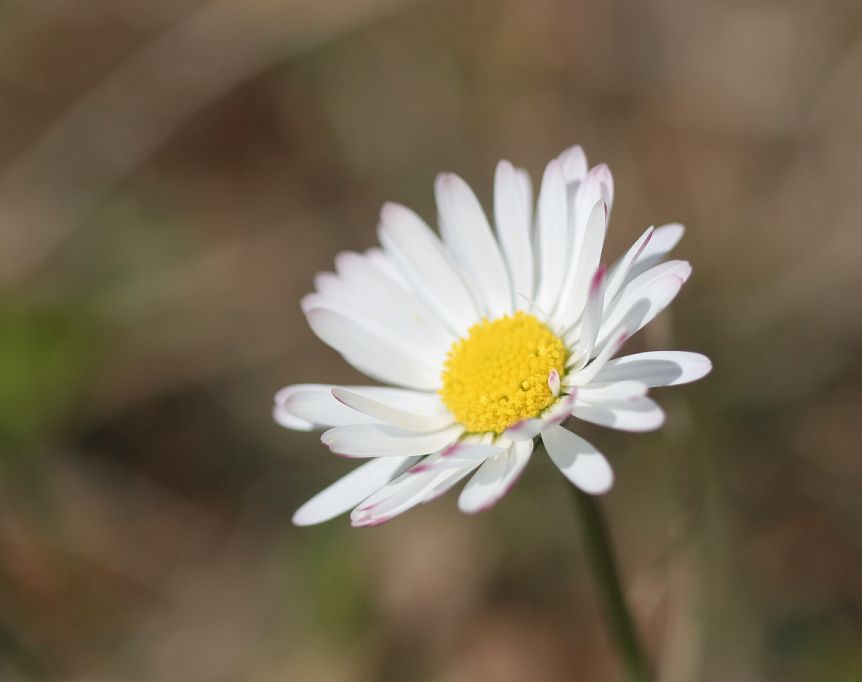 Watchin’ other people work can be a satisfying day off.

How much can I rave bout this guy??? Not only a good guy but brilliant way to make a positive impact on a neighborhood and great advertising!

Right? So cool. I used to love to do complimentary work like that but I barely have enough energy to polish off my own projects these days.

It takes me months to mow my own lawn… I am serious. And my property is quite small. No idea how others do it…
I use a tiny thing I keep forgetting the name of as I can’t use a proper lawnmower here due to reasons. And one place is so bad that I work there 10 times until I reach every other parts of the property. Well the problematic area is actually the road and farther, not my property but I can’t it just leave be. And I have plants everywhere so I need to be careful. And elevation, I have that. But this is a cute place

A bit messy but oh well. 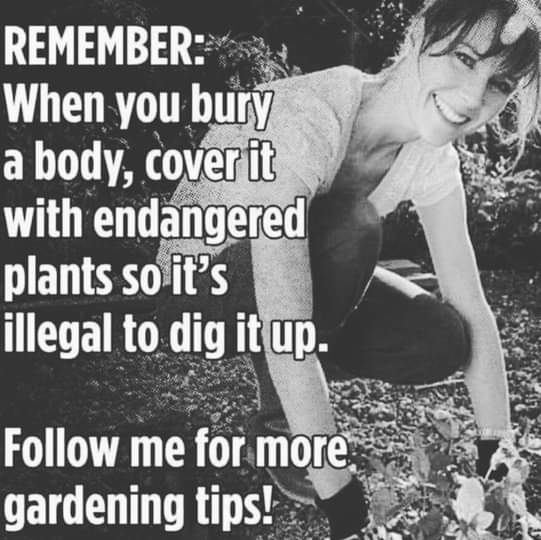 My landlady better watch her step.

Fixed it for ya. 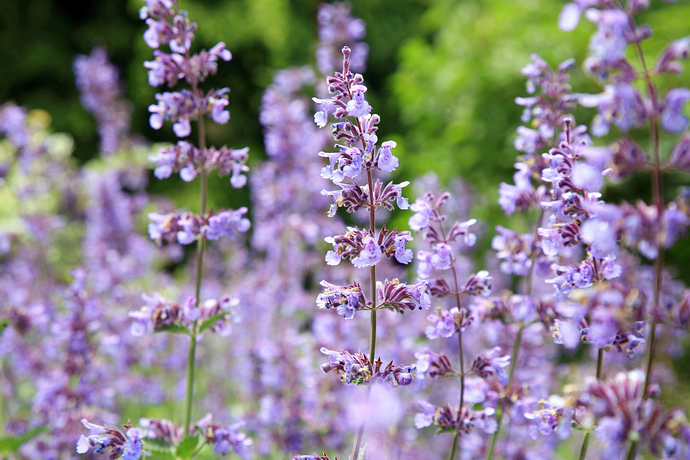 It’s been one of the wettest spring’s on record in Portland, Oregon, and it shows no sign of stopping. This confounds my berm building plans as mud is so difficult to stack. The irony is that I’m trying to raise the gardens to keep them out of the water but the water is making it difficult to raise them. There’s a koan in there, somewhere, but I’m having trouble meditating on it through all the swearing. 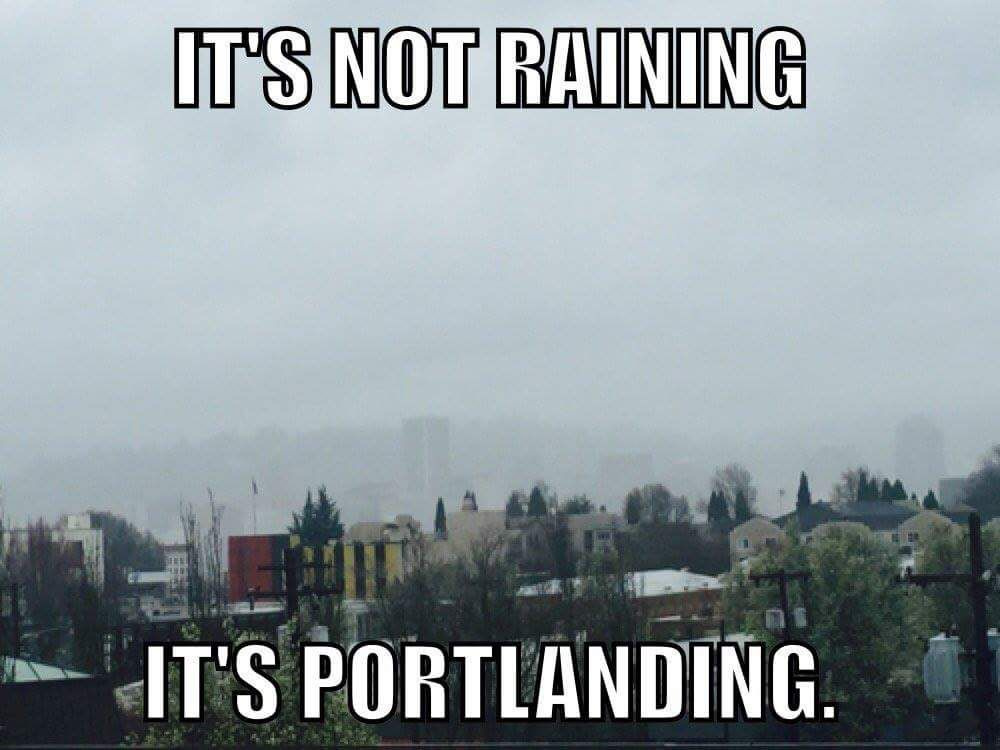 Humping bags of soil and patio slabs is a workout and a half and thats what I was doing on Wednesday.
It was a very rainy day so I made the most of staying in and got finally got my act together to re-organise the back room. It had been getting more and more full to bursting with garden stuff in prep to go out into my new over hauled garden. I had spent a few years gathering the stuff and now finally able to get most outdoors. The room had become so busy that I had to find little foot holes to stand in and reach over to get suff I was wanting. So I was shifting heavy mosaic/metal patio table and chairs and patio canopy/parasol and other heavy bits and pieces but eventually got it cleared enough to be able to walk in and around without falling over everything. Then the sun came out earlier than expected so I did the same thing all over again but in the shed! This time is was heavy patio slabs and bags of soil that had to be shifted. Wow what a day… what a workout. I was at it all day and into the evening!

Went out again this afternoon after returning from work as sun was lovely and warm and reorganised the shelves and drawers that are in there. I spent a couple of hours talking to myself saying things like “Oh I HAVE got one of those” and “Ooo whats that for?” also found that I have multiples of work and garden tools! Oh I love it when I am not tripping over everything, its such a sense of achievement. 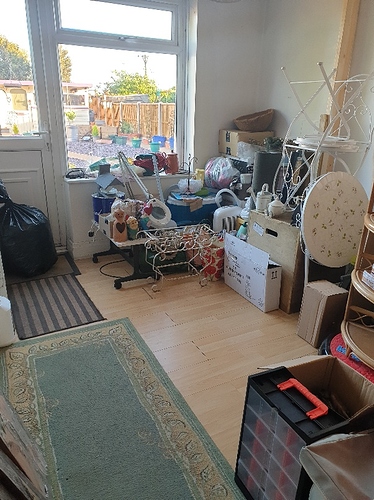 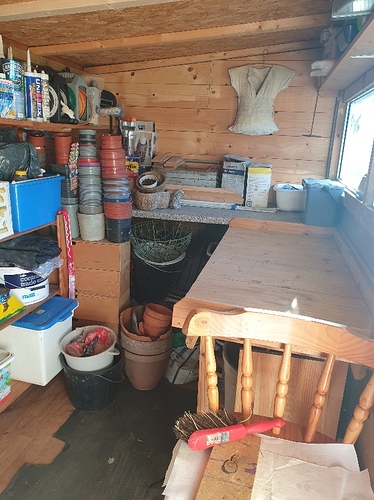 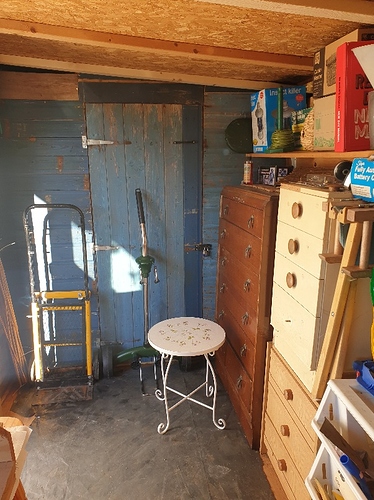 I do 0 gardening. Ours is small and full of wild flowers at the moment. The grass is done, but only around the flowers that grow naturally. We don’t cut them.

such a sense of achievement

Hell to the yes. I love me some organizing and tidying. There’s a phrase “putting things to rights,” I love that. Right angles or right in the world, it’s all good. I watch Hoarders just to skip to the end.

flowers that grow naturally. We don’t cut them.

I would have a totally native yard if it weren’t for the HOA. Instead, I removed about half the grass in the front yard last year (heat dome PTSD) and put in shrubs, bulbs, and perennials that produce snackable seeds for birds, then installed three birdbaths in varying sizes and depths: one for tinies, one for mid-size, and one crowbath on a stump. The crowbath is the most fun to watch. 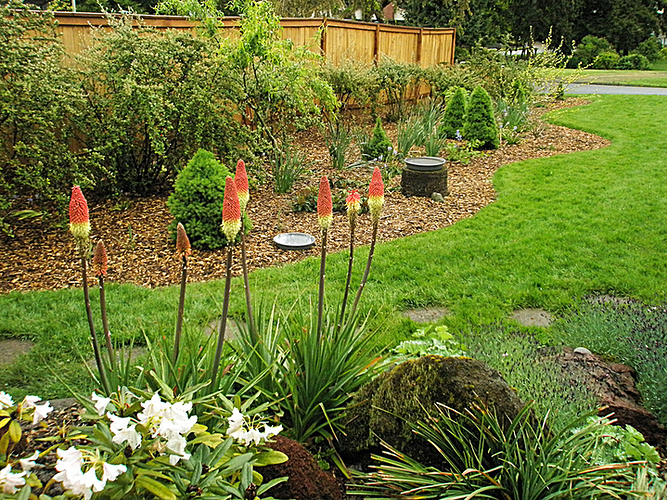 *This is a new install so it looks a little rangy but the row of cotoneasters in the back will get 12’ high and completely obliterate that hideous fence over time and everything else will fill in to be one giant mass of green lovely. Here, birdy, birdy.

Thanks! And guess what? It cost $0. Every plant was rescued or donated, the mulch was free, and the stump came from my neighbor’s recently felled tree. The birdbaths are garden pot saucers.

Martha Stewart can suck it.

We are loving seeing what comes up at our new place. Plus. Neighbor with a lush garden and a big heart is going to give us lots of perennials from his extras. Says we are helping him! Hah!

Neighbor with a lush garden and a big heart is going to give us lots of perennials from his extras. Says we are helping him!

Take it and run. Most serious gardeners lament pulling out plants just to compost them, we love to see our babies happily adopted. I’ve had rare specimens foisted upon me just for admiring them in someone’s yard. I travel everywhere with pots and a shovel now because you never know.