COVID-19 What Are/Will You Do to Deal with This?

The NYC system currently is overwhelmed or at capacity.

It’s gonna be tough, Ethan. The entire state has ~53,000 hospital beds and yesterday the governor said they need an additional 87,000, so it’s a tall order indeed. They’re expecting the peak need to be in about 3 weeks.

NYC is farther along than almost every other place in the U.S. - if the peak is as soon as 3 weeks from now, at least it would be presumed that things would start easing off after that. Frankly, it is a welcome relief to think of such things, even as one realizes that the next few weeks will likely be grim indeed. For the USA as a whole, probably the next couple months.

It’s worse if we are actually testing closer to the real number who have COVID19. Let’s say instead only 100k people have it in NYC. Then the capacity would be 200k per month, and we would need 20 months at capacity to reach herd immunity.

I’m pretty much lost here - there is so much we don’t yet know. (One thing I’ve noticed is that almost exactly 1/3 of NYC tests have been positive thus far - greatly in excess of the other places I’ve checked.) You mentioned R0 being 1, as an example, but from all I’ve seen it’s between 2 and 3. If anything, I think this argues for a greater and faster overwhelming of medical facilities that most people are picturing as of now.

'Herd immunity" would be a very good thing, as would effective drugs and eventually a vaccine. The problem is getting there and what happens in the meantime. 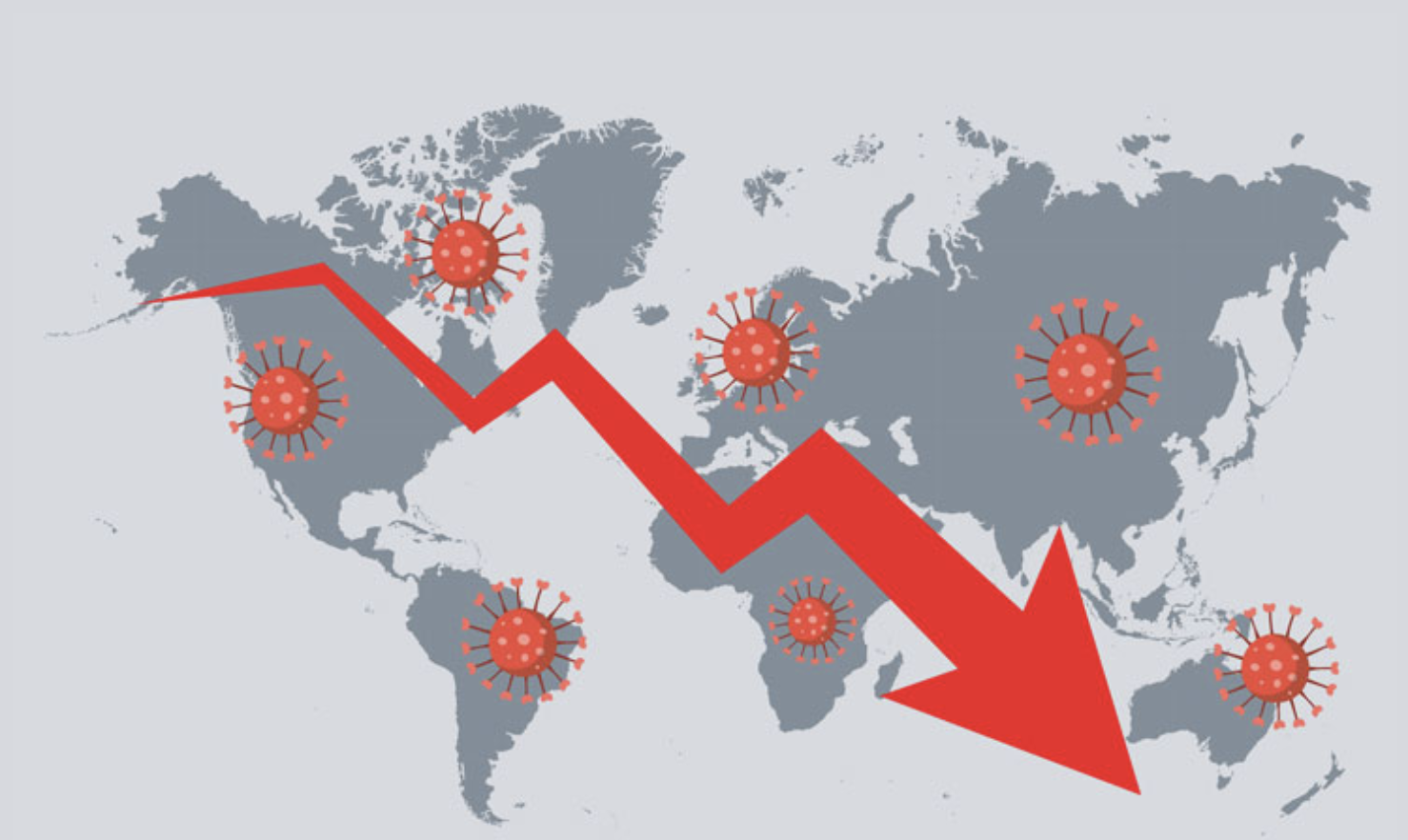 How to understand — and report — figures for ‘COVID deaths’ | Spectator USA

Every day, now, we are seeing figures for ‘COVID deaths’. These numbers are often expressed on graphs showing an exponential rise

R0 can be changed by social distancing. I was proposing keeping at 1 with everything at capacity.

You say NYC is 3 weeks from peak. That doesn’t mean jack when peak is because of social distancing and thus would last months or years at a steady rate. Turn off the social distancing, and you will get a new, higher peak.

At least here in America (I’m also a Native American Citizen of Canada and Belize British Honduras besides being an America born citizen) I think people will be getting more money than when they were working if my personal projections are correct. After doing a lot of research my income actually increased (a lot, by hundreds of dollars) because of this scandalous virus not decreased.

You say NYC is 3 weeks from peak. That doesn’t mean jack when peak is because of social distancing and thus would last months or years at a steady rate. Turn off the social distancing, and you will get a new, higher peak.

Yeah - the 3 weeks is just what the NY governor and the “state gov’t” are currently saying. It definitely remains to be seen what exactly happens…

And again… it would be a long term peak… no return to normalcy here for 1.5 years

Walmart is going to give there peeps bonuses from what I hear?

Ethan, isn’t that greatly dependent on how many people actually get “sick” versus having the virus and never displaying symptoms to that extent? 1.5 years - “effects” may well linger longer than that, no argument there, regardless - I guess it’s how we define “normalcy.”

You Can Actually Feel Good About Ordering Gallons of Takeout Booze From Your...

Like an increasing number of establishments, many restaurants, no longer allowed to offer on-site dining because of the spreading coronavirus, have pivoted entirely to curbside...

I consider myself lucky. As a lifelong germ phobe, I was all over news reports in February. My boss informed me her brother at fox “news” said it was a hoax. Sure. I was polite. My husband and I manage a small mobile home park so we get to stay at home. He snuck out to home depot a few times, but when the California governor locked us down he got serious. He does lawn maintenance, home repair, and way too much Netflix. I organize,garden,and read. We thank god his son got laid off work. We are content. Now, if only we could find toilet paper. We are down to six rolls.

Hi Regina =). It is nice to see you back on here =). We have found going to Walmart at opening at 7am works well for us for getting toilet paper. Ours has wisely put a limit of one pack her family, which is good --to be fair for all I think.

Hi Susan. Missed you. At some point we will have to go on the hunt. But I have always had the impression (based in part on my Canadian cousins) that canadians are way more polite than Americans? So not holding my breath on the tp. And no Sears catalogues to be had!

saul has mentioned a type of plant leaf…

I know that some people are using baby wipes, or paper towels, toilet paper, napkins, other paper products. I have been able to go at 7am on Saturday mornings to get it so far (we didn’t go since last Saturday and I think we have enough until the 11th–I plan to shop that day for some food and another pack of it then too.

We are totally out of vegetables, fruits and my fridge is quite empty now but we have 2 freezers quite full still and a lot of canned goods =) so we are still fine for food, just different choices =).

Ethan, isn’t that greatly dependent on how many people actually get “sick” versus having the virus and never displaying symptoms to that extent? 1.5 years - “effects” may well linger longer than that, no argument there, regardless - I guess it’s how we define “normalcy.”

I answered that in my analysis, which I am linking to again here. I used NYC as an example. if 50,000 documented cases overwhelm the system, the real question is how many ACTUAL cases is it? In my analysis, I posited first 500,000 cases and then 100,000 cases. If this really means 500,000 actual illnesses (including those not tested or reported) in NYC overwhelms the healthcare system, then the system would need to slow down the infection rate to the maximum sustainable for the healthcare system for 4 months to achieve 50% immunity, which is likely herd immunity. This assumes that the average hospital or ICU patient is there for 2 weeks. Using all the same assumptions (which are pretty fair estimates), I showed that if you instead say there are 100,000 actual illnesses in NYC at healthcare capacity, then it would take 20 months to reach herd immunity at healthcare capacity.

COVID-19 What Are/Will You Do to Deal with This? Health

This is obviously a generalization for estimating, but thoughts? Here is the bad news. You can extrapolate for your own locality: The NYC system current is overwhelmed or at capacity. There are 50,000 documented cases of COVID19 in NYC. We don’t know how many actual cases though there are, so we can’t say how many people sick it takes to hit capacity, but we can guess. Let’s be generous and at 500k people in NYC have COVID19. Then 500k concurrently sick people hit the capacity in NYC. Let’…

We have tons of meat. The only thing I need periodically (every 4 weeks) is eggs. Unfortunately, not everybody here eats like me. We need berries and lettuce occasionally for my son, random deli meat for my wife (pregnancy comes with all kinds of food side effects), and very specific naan bread for my father-in-law, who doesn’t want to just buy enough of it and freeze it…

I am the only Keto person in my house – so I have been eating a lot of Salmon, Shrimp, ground beef, canned tuna, chicken, chicken and eggs for me --and I was eating a bit of vegetables at times with those too. My husband, 2 daughters at home still (19 and 21) and my grand daughter (almost 4) are all SAD eaters and there is a lot of food for them -we are fine for food but the no vegetables and fruits bothers them --I can tolerate it, although I miss having some vegetables.

I have 8 bottles of my Distilled Water for my CPAP machine, which to me was more of a necessity then food for me --I can Fast easily =).

That is exciting that you two are having a new baby soon – best wishes =) and congratulations =). Your little boy must be excited to be a big brother soon, that is terrific =).

I’ve been quarantined for quite some time now awaiting test results, my dad was a a rehabilitation facility for physical Therapy. He passed away suddenly in his sleep, with no real reason why, as well as a few other people, I was told it may have been a covid spread but I’ll never know because there isn’t enough tests to test him. I thought he was safe where he was, but his age and respiratory problems made it hard for him. I haven’t worked for three weeks to avoid any spreading if I did have it. Been just staying out at home. It’s rough for everyone, you can’t even have a funeral right now, I can’t even afford bills or a funeral right now. It’s hard times.

Ashley,
You have my sympathies and prayers.
I also lost my mother last week in her sleep at a care facility and not able to say goodbye. It is extremely hard to accept. My father is in the same facility and is quarantined to his room without visitation due to running a high fever. The caretakers say he is just lost and struggling with the whole situation and all I can do is pray. Stay strong Ashley. I’m sure that is what our parents would want us to do.

Thank you ron, I didn’t get to say goodbye either. I will keep you in my thoughts and prayers! I’m so sorry about your mom, and your poor dad as well! It’s hard isn’t it? Can’t even be there for him or even mourn properly!