COVID-19 What Are/Will You Do to Deal with This?

last night I was awake half the night coughing

Oh @Shortstuff I’m so sorry to hear this. Sending every good wish to you and your hens!

This model is compatible with your theory 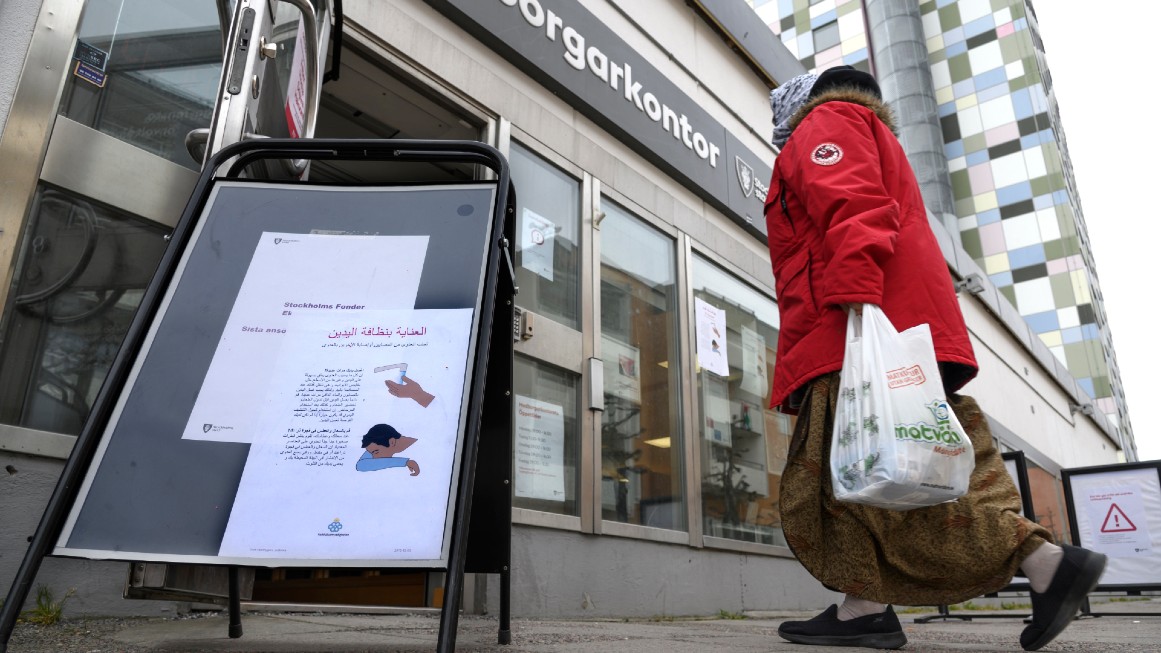 Despite Coronavirus, Sweden Refuses To Shutter Businesses and Limit Gatherings

The Scandinavian country is betting against draconian restrictions and in favor of the free movement of people and goods.

I hope you are feeling OK today and that your sore throat stays mild and you find a way to rest with that cough. Surely there would be tea sipping involved?

So many people waking up to the situation now. So many requests to buy egg laying chickens on the virtual community notice boards.

Does having hens, make one clucky?

Truckers are saying “fuck the log rules, I’m hauling” and they’re getting supplies to the stores. People are stocking the shelves all night and letting old people shop first. Folks are buying meals for truckers, who (obviously) can’t go through the drive-ups. Asking ’em what they want, then buying it for them.

Carnival Cruise Line has told Trump “We can match those big Navy Hospital ships with some fully staffed cruise ships”.

GM and Ford have said “hold our cars and watch this — we can make ventilators where we were just making car parts, starting next week” — by re-engineering seat ventilators which their engineers hacked together for a new purpose. In under a week.

In a project with which I’m loosely associated, a very-effective agricultural disease-control agent was re-purposed and re-labeled specifically for Corona-virus control by the FDA and EPA in under ten days, from initial request to distribution.

Restaurants and schools have said, “we’ve got kitchens and staff; we can feed the poor kids who used have school lunch.”

NBA basketball players have said, “Hold our basketballs while we write checks to pay the arena staff.”

Construction companies are saying, “Here are some high-end masks for medical staff and doctors”.

Distilleries are making sanitizer out of distilling “heads and tails” which are normally discarded. Nasty shit to drink, but effective sanitizer.

People are tipping grocery check-out clerks and thanking them for taking the risk.

Local, state, and county governments are taking control of everything the feds cannot do. Some are doing it wrong, but for the first time in decades … they’re doing it. Federalism is re-emerging, and the smallest unit of government is the individual and the family. This, too, is re-emerging after decades of dormancy.

This has been a good thread to read. Thank you, Michael.

I’m continuing to work, maybe even more. My agency has given me the option of working from home, but I am more comfortable doing teletherapy from my office. We have gone completely virtual,and have to applaud state governments who have acted quickly to relax policies and procedures in order to provide continuity of care to my clients. I’m the only one in my building this week, I expect a colleague to return to her side of the lobby next week. It is easy to practice social distancing. Support staff are staggering days working. I feel very blessed with how my employer is responding.

Personally, the ‘at home’ part feels vaguely the same. Just now everyone’s living like I’ve been living for several years. I work, come home. Stocked up first of the month on meat. My local market has continued to have the peppers and berries I enjoy fresh and HWC. I’ve gone back one other time this month because I realized I might run out of coffee.

I’ve started seeds to sprout and am going to do a greenhouse garden this year. Not that I eat much in the way of vegetables, but it will be fun to grow them and share them.

And, I’m planning some section hikes of the Colorado Trail. Got my trail guide book in just a few days ago.

Then there’s that constant pull to check the news. I hate that part. I think I’ll go wash my hands.

Thanks @FrankoBear, the cough is easing now and throat feels OK today. It has stayed mild and I hope to be through the worst of it now

My girls are busily laying eggs as normal so once I’m able to get outside again, I will be sharing with those in greater need.

My girls are busily laying eggs as normal so once I’m able to get outside again, I will be sharing with those in greater need.

You and those chickens deserve many hearts

Has anyone on keto developed pneumonia symptoms to coronavirus?

Some ideas here for active countermeasures, backed up with multiple references following.

Note: The suggestions in this guest essay may or may not be useful in your personal situation. It is provided here for review and discussion. There is some supporting evidence that increased heat a…

I am beginning to get a little concerned about the potential for deterioration of proper social morality due to the economic shutdown during this worldwide virus attack. Is there any evidence out there assuring that the leaders in charge have taken steps to protect their countries populations from this even “another” side affect of the pandemic? I’ve heard nothing here in the US aside from a possible fine for violating a stay at home order.
Maybe this is not being addressed in fear of causing even greater panic within the populations? Would be nice to know this potential disaster is at least being monitored.
Cooped up for an extended length of time can sure make the mind wander!

God bless you Jackie. Thanks for all you do to help ppl. I don’t blame you for being scared. May you find the courage to press on!

Keto + Fasting has been the greatest blessing in my (and my wife’s) life for dealing with this pandemic! All the knowledge I have acquired in the past year+ has enabled me to improve my immune system greatly and, hopefully, to avoid getting ill. As I write this I may actually BE infected. But my symptoms are so mild as to be non-existent: persistent off and on headache and mild fatigue. What is interesting is that if I consume too much sugar: varied, grapes, raisins mostly, the symptoms are WORSE! So, staying OFF the sugar is a MUST for anyone wanting to beat this! Anyhow, Keto-on, get LOTS of sleep, if possible and STAY OFF THE SUGAR! It may just save your life!

Thank you @HolyHacker335 for your kind words.

concerned about the potential for deterioration of proper social morality

I also worry about a potential crime wave bought about by poverty, desperation and domestic violence. There are a lot of unfortunate people in the world and this can only amplify their situation

So sorry to hear that @Shortstuff. I hope you are now on the mend.

This is why it is imperative to get money into peoples hands quickly and for the most part in the US politicians know this. No party wants to burn the country down but that is what inaction will do. On the other hand no party wants to give a “win” to the opposition party. At times I feel like this is a country wide game of Russian roulette and we are the players. The problem is politicians, and I mean both parties, are loading the bullets. I wish in this time of need we could rally around the flag and whomever is president. But that is not going to happen, it is Trump Vs Cuomo in the next election and the country will need to suffer through it. It won’t be pretty.

I am beginning to get a little concerned about the potential for deterioration of proper social morality due to the economic shutdown during this worldwide virus attack. Is there any evidence out there assuring that the leaders in charge have taken steps to protect their countries populations from this even “another” side affect of the pandemic? I’ve heard nothing here in the US aside from a possible fine for violating a stay at home order.

Ron, except for South Korea, everybody’s done too little thus far - seems like politicians are more afraid of being seen as doing “too much” rather than doing too little. To this point, people have been pretty good about maintaining - in the realm you mention - but there would be overlap between anti-virus measures and control of riots, crime, etc., and I imagine the rule would be that there too politicians would be behind the curve, rather than ahead of it.

There’s no national lockdown in the U.S. yet, and much is still legally in the hands of the individual states. Some states and cities have locked down on their own (and Idaho’s stay-at-home order was more timely than most). As of now it would also be the state governors who would call out the National Guard, for example, if people start going nuts.

Thus far, the President has invoked the Stafford Act (from 1988 - ‘The Robert T. Stafford Disaster Relief and Emergency Assistance Act’). This says what the federal gov’t can do - first time ever for a health epidemic.

Additional, more severe measures would include declaring martial law (military authority now trumps civil authority) - this both can be on a federal level and on a state level if the state’s contitution includes it. For really hardcore enforcement of social distancing - this is where it’s at, freedom of movement, of association, (stuff we normally take for granted as civil liberties) can be suspended. Obviously, if a state “is in flames” then prior to that the gov’t should have taken action.

Martial law still has limits - federal troops can only do so much. National Guard troops however, being under state control, can do stuff like search and seizure.

A further step would be bringing in the ’ Insurrection Act’ which enlarges the scope of federal action, on the grounds that the states are incapable of maintaining order.

Cooped up for an extended length of time can sure make the mind wander!

Yeah… Weeks back, taking a long view, I was thinking about the water and electricity staying on (it sure would suck if they didn’t). Prior to that, I imagine, we’d see the food distribution system breaking down, and I bet things would get “interesting” then.

This is obviously a generalization for estimating, but thoughts?

Here is the bad news. You can extrapolate for your own locality:

The NYC system current is overwhelmed or at capacity.
There are 50,000 documented cases of COVID19 in NYC.
We don’t know how many actual cases though there are, so we can’t say how many people sick it takes to hit capacity, but we can guess. Let’s be generous and at 500k people in NYC have COVID19.
Then 500k concurrently sick people hit the capacity in NYC.
Let’s also be generous and say that the average hospital stay is 2 weeks.
If we get R0 = 1, then the capacity of sick people is 1 million per month.
Let’s say that heard immunity kicks in when 50% have been infected.
NYC has 8 million people.
Then it will be 4 months at healthcare capacity to reach herd immunity in NYC.

It’s worse if we are actually testing closer to the real number who have COVID19. Let’s say instead only 100k people have it in NYC. Then the capacity would be 200k per month, and we would need 20 months at capacity to reach herd immunity.