My husband bowls in a league every Tuesday where the majority members are retired and in their 60’s, 70’s and 80’s so definitely a high risk group… and it has not been cancelled as of this afternoon.

and it has not been cancelled as of this afternoon.

!!! ok this. This is the sort of thing that I believe should be canceled and/or postponed. Very hard to enforce social distancing at bowling alley.

But then there is a point where our elders will do what they want no matter what. My inlaws are in their 90s and still live on their own in a senior apartment. They are used to people dying all around them it seems. It’s very hard to get them to agree to stay put if at all possible. It helps that most of the things they would go to like church or community centers or sewing groups are closed…

The Gov of Michigan announced all bars and dine-in restaurants will close at 3pm. Only take out/delivery will function. Had a few customers asking about rubbing alcohol, thermometers, and hand sanitizer. They were unhappy about that, but glad we had toilet paper.

I worked a short shift today, thankfully. I had planned to stay longer- (I double as a pharmacy tech and get all the hours I want), however, getting out of the car this morning, my foot landed on a patch of ice, and I flew out of the car. My legs ended up under my boss’s car (parked next to mine), hit my left leg, back in 3 spots, and my head. Not sure how I got up, with a cup of coffee still in tact - but I was glad the coffee didn’t spill. That would have sucked. Just cozying up at home with some beef broth, and my Suduko puzzle book. (I’ve graduated to Medium level.

Just focusing on prayer now, and how to best help others around me. Hope you all stay healthy!

my foot landed on a patch of ice,

I’m dealing with today’s coronavirus news by having a glass of wine and breathing deeply! Mr S and I are apparently going to be in 12-week isolation from the weekend onwards - although I’ve just had a chat with him about the fact that if we do actually catch it, we will only need to isolate for 14 days!

Our prime minister is looking a little stressed right now…

The Gov of Michigan announced all bars and dine-in restaurants will close at 3pm.

I don’t know about bars and restaurants but stores except groceries, pharmacies and some others close at 3pm here now. EDIT: Yep, bars and restaurants closes at 3pm too.
Even small groups are strongly discouraged so my choir practice is out. Libraries, cinemas, sport… Nope. Elderly people are strongly advised to stay home all the time.
The lottery has a glass as a barrier between the worker and the people now.
The shops are still full with stuff, as far as I know.

I look at numbers all the time today (I need a more productive addiction, seriously), it hit Europe hard. WAY more cases than in the US, even without Italy, I feel sorry about them so much lately. And it just started. My tiny country reached the point where group infections happen, not single/double ones anymore but it’s still only 39 cases this far, 2 healed, 1 dead. We will see.

I plan some shopping in the next 1-2 weeks, just to be safe, I made a little list… Maybe the mood hits when I don’t want to go out (I mean, near people, I obviously will walk every day) for a few months…? I hope it won’t happen, it sounds too much even for a half-hermit like me. I don’t expect stores will be closed for long, it probably would kill more people… And panic buying already happened for many, allegedly (even though I saw about nothing of it where I shopped) and if there is time, new products can be made, transported, sold and whatnot. I actually don’t know what to expect. It’s so new!

My SO had enough of the topic yesterday. Me, today but I can’t stop, it’s on my mind too much… I am that type, a serious, thought inducing topic grabs me and I can’t escape easily…

Has anyone here been tested? Results?
What about symptoms?

I don’t know anyone personally that is sick, or hospitalized. Eventually we will all know someone. I too have been watching the numbers. It’s very sad. Trump was talking about relying on our Millennials. There’s so much truth to this as they are far less likely to have severe consequences from this virus. They will have to be our arms and legs. I am a baby boomer… so moderate to high risk. My mom is creeping up on 90. All we can do is keep her isolated. Fortunately she likes her own company best and she reads, knits , plays FreeCell on the Internet please FreeCell on the Internet and watches TV. They are delivering one meal a day to their room at her senior campus at 1500. I can only stay in contact by phone

Then think about about this question for each situation at peak:

How many concurrent patients will there be in the hospital and ICU given that hospitalization could be for two to three weeks?​

If 40% of the population is currently infected, there is a 92% chance of you coming across an infected person when you go shopping if you come across 5 people.​

The EU is a collection of small countries that act together like our states. The EU is a lot smaller than the US. By your logic, we should close all state borders in the US. Good luck with that!

Depending on which data source you use, the EU combined GDP is shown to be somewhat larger than the US. In any event, the EU is not “a lot smaller” than the US.

… Perhaps you are referring to physical size?

I haven’t read all the replies, but I think one way those on the keto diet may do better is by having a reduced need for oxygen, since burning fats and ketones requires less oxygen than carbs and protein do. Increasing the amount of fat in the diet has long been used to reduce oxygen need in fragile patients. 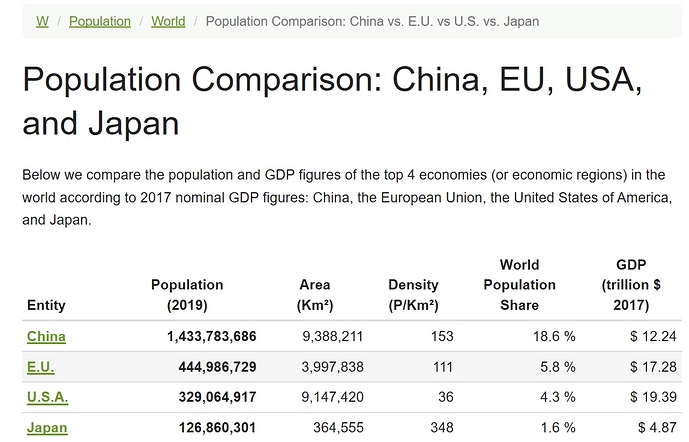 …I think I follow you… but only to a point.

By definition, wouldn’t a stronger immune system necessarily make for a better outcome (i.e., less extensive degree of invasion by a virus and/or a faster recovery)?
[…]
If “keto people” do indeed have a more robust immune system than “non-keto people” it seems to follow that keto people’s chances against COVID-19 would be better, no?

I don’t think anyone can answer this. I’m just trying to cover all bases. Overall, you’re right. But if someone becomes symptomatic, we don’t know.

Think about it this way: If a medieval civilization builds a wall against intruders, a higher wall might give more protection. But if the wall breaks, the height doesn’t matter anymore.

The immune system may be such a wall. There are two outcomes: (a) The immune system kills the virus before it can multiply (= the wall holds), or (b) the virus starts to multiply in the body and has to be defeated by the immune system (= the wall is down and the intruders have to be fought off). In (a), I think keto gives a much higher chance for a positive outcome. As for (b), we simply don’t have any data. And that’s exactly what they did with the study that AtomicSpaceBunny cited: They introduced a virus in a way that the immune system was circumvented and an infection was ensured (so (a) was out of the game), and suddenly the keto mice died and the glucose mice didn’t.

Don’t get me wrong. I don’t claim that it’s better to eat carbs with a viral infection. All I’m saying is that there are some holes in the data that we have, and there may be some situations where some carbs would do good – but as of now we don’t know which ones (and if there are any).

My husband’s bowling league voted 30-5 today to keep bowling. Schools still open here. Unless gatherings of 36 people are banned by the authorities they will continue to bowl weekly.

If there is a confirmed case in the area that might change. Last count was 22 cases and no deaths for the entire state.

Goodness I’m not sure that’s a good idea.

My husband’s bowling league voted 30-5 today to keep bowling. Schools still open here. Unless gatherings of 36 people are banned by the authorities they will continue to bowl weekly.

Twelve teams of 3 and one was out sick. They are all elderly and always a handful out sick every week. They worry about the regular flu doing them in more than COVID-19 but fear of transmission of either is not keeping them home (for now).

They are all elderly and always a handful out sick every week.

That’s just how they roll.

Well… my husband said they were very calm and reasonable and more worried about the effect on the economy than their health. They have all lived long, full lives… know they will die in the next few years or so and don’t want someone telling them they have to give up their social interaction when they are willing to (literally) risk their lives on it to keep enjoying LIFE.

Everyone was “high fiving” and hugging when they hit strikes. No changes in behaviours because of the virus that isn’t even in this area. These are the same people when a massive tornado ripped through Highland about 10 years ago and destroyed so much property… they didn’t wait on FEMA to show up… they posted two signs in the local gym… “those in need” and “those who can help”.

I have a safe room in my basement and my Dad asked me what would happen if my house collapsed on top of it??? I told him my neighbor Ed would be over with his backhoe digging me out long before the “authorities” responded.

This is an information packed video. thanks for posting.