Ok…so the update after night 2 of drinking this IPA. It is pretty bitter. My partner thinks it is a bit too strong. It seems to be more of a novelty drink than a replacement for beer. He is going to try using rum w/ hops to see if it is any different…lighter tasting. since whiskey is a bit harsh in our opinion. This will take a bit of time to get a batch going…like this weekend. we are going to 1/2 the recipe in case it is not good tasting. will let you know.

Ok, I tried this by adding Chinook hops to Jameson IPA. It was pretty tasty but I decided to go a slightly different route as something was missing and I didn’t want to bother too much with the gelatin.
Tonight I strained off a shot glass of the hopped whiskey and mixed it with a very low carb beer. In this case it was Beck’s light because that’s what I had on hand.
Wow! I really enjoyed this. The Beck’s has about 4 grams of carbs so tomorrow I’m picking up some Mich Amber Ultra and trying it with that.

I may do a batch soon with a more mellow hop, perhaps Kent Goldings or Fuggles and see how that goes. I will probably also experiment with the gelatin for more body as I love a good heavy beer.
As for now, this is pretty darned awesome mixed with what would normally be a mostly tasteless beer.
Not pretty but nice head and very tasty. 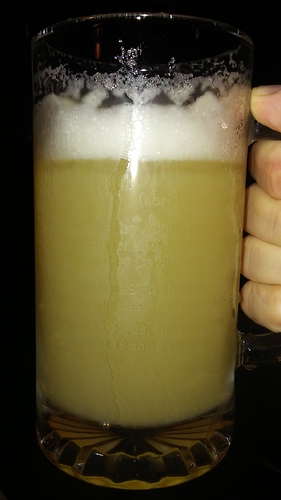 Well, I JUST tried some and I have to say, it tastes a LOT like an IPA. Kind of blown away. It actually tastes like a freaking beer.

The test glass in the photo didn’t have the gelatin but I have some gelatin in the fridge I’ll try later tonight. I also made this glass on the lighter side since a stronger version I tried was too bitter for me. Maybe a tablespoon of the precious “elixir” in this glass.

I’m really kind of amazed, since I can’t drink even low carb beer because of the gluten. Wow. WOW.

Now how do we make a stout? I have bottle of Jamesons stout ready and waiting!

I’m going to be continually experimenting with this and I have a great love of stout (Irish blood) so if I find a workable solution I’ll let you know. Please let us know if you come up with something. The first “real” ale I ever had was a Murphy’s Stout in Langtry’s pub in Portsmouth, England many years ago.

By the way Greens makes a gluten free line of beers that, while not carb free, are actually not very carby. Sadly, they don’t make a stout.

Oh yeah, I used to drink Greens before I went keto. Didn’t know they were less carby.

One of the few brands that actually lists carbs on the bottle. Their lager is tasty and fairly low carb, the ales have more carbs. I think the amber rolls in around 12 carbs for the pint.

Ok Guys just so you all know, I’m the guy Carl made this for and it’s awesome!! I was able to recover the whole bottle of jameson’s by using a nylon stocking (unused of course) thanks Carl for doing this!!

I’m the guy Carl made this for and it’s awesome!!

thanks for your results and ideas. I think when I get down more to a lower goal weight I will experiment w/ a low carb beer …adding the keto beer to it (half and half) so I can enjoy beers again. I miss them sooo.

I bottled a few… made some different strengths because I couldn’t decide which I liked best. Sure tastes like a bitter pale ale to me!

I also ran the “elixir” through a coffee filter, so once the bubbles settle, these should appear clear. 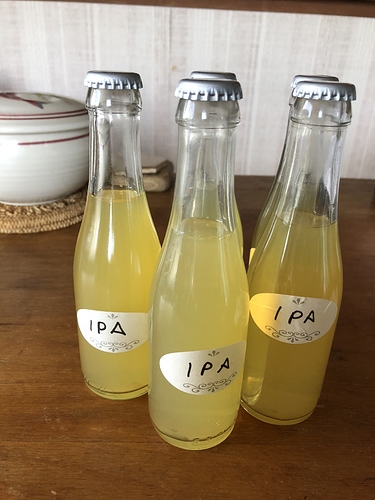 I’m tryin this when i have a day or 2 off!
Needs focus, that is untill testing time!!! Ha:chipmunk:

Where there’s a will, there’s a way!!!
Happy holiday Carl, my life is ever improved due to you and Richard!

yes…i think the “too bitter” taste has run its course for me. I will stick w/ champagne and just do an IPA beer on a special occasion.

I love your professional process…very cool

I heard this recipe at the same time my husband was reading The Poison Squad: one chemist’s single-minded crusade for food safety at the turn of the twentieth century by Deborah Blum. It was an amazing coincidence, as some of the recipes given in the book were similar to Carl’s, and only a problem because they were sold as the product they emulated. The knowledge exists in strange places!

Carl’s recipe is great because beer can be such a deal-breaker.

I finally had a chance to try this and I’m impressed.

I used 4-cups of Cascade leaf hops and 1.5 L of Irish whiskey. I elected to use something cheaper than Jameson since it was going to be hop-infused. I mixed the hops / whiskey and left un-refrigerated for at least 10 days (over the Christmas holidays). I squeezed as much of the nector out as I could and lost about 150 ml (~10%). I may have been able to use a press to squeeze out more but the effort wasn’t worth the reward.

Today I finally tried the concoction using club soda (all I had) and no gelatin as I simply wanted to get an idea of the flavor. It definitely has that IPA flavor I’ve been missing.

While I may try the gelatin-based mixture, I’d love to find an easier way to make all of this work! I’ll try adding some hop whiskey to a low-card beer as @barefootbob mentioned.

So it has been a couple of decades since I’ve brewed my own beer but I’m wondering if a hops extract of sorts could be made? Perhaps boil and reduce a strong batch of hops tea? 2 bottles of irish whiskey and the hops isn’t cheap but if we can simply add a bit of hops extract to a low-carb beer, perhaps that would be enough?

Anyway, I’d love to hear what others have tried to reduce the cost, efforts, etc.

Thoughts on using SF orange gelatin to get a flavor like Blue Moon?
How many ounces of water was used?
I am going to use a tortilla press to squeeze my mash.

Now how do we make a stout?

Add a bit of espresso?