Been off the wagon for soooooo long update

I am still BBBE and I have a Dr. appointment Thursday. I got a call today from my insurance company, a nurse. I was grilled on why I am not on metformin and at my age it is required by my insurance company. I asked her why I would want to be taking it? I was put on it 3 months ago and took it for 4 days and my blood glucose went down to a 43 and never got above 72 an hour after eating, I also told her that during this time I was very light headed and could not stop my hands from shaking. I told her that when I stopped taking it, I was fine and my glucose was a 78 fasting and never got above 129 a hour after a meal. She replied that it was required by my insurance and if I had these problems to “drink a few glasses of orange juice” Full disclosure here: I am schizoaffective with bipolar 1. I am worried about this “nurse” and will be discussing it with my Dr.

Is BBBE basically carnivore? I’m not familiar with it.
I’ll let others with more knowledge and experience weigh in with their thoughts. Knowing your height, weight, and what you currently eat on most days, medications, health issues will help.

If I were you, I’d consider full carnivore. That has helped some like you (though I have no idea about how many).

On the other hand, a nurse telling you to drink orange juice because the drug you took caused too low of a blood sugar, that’s not good.

They may be able to coerce you to fill the script to keep your insurance but they have no idea if you are actually swallowing the pills. 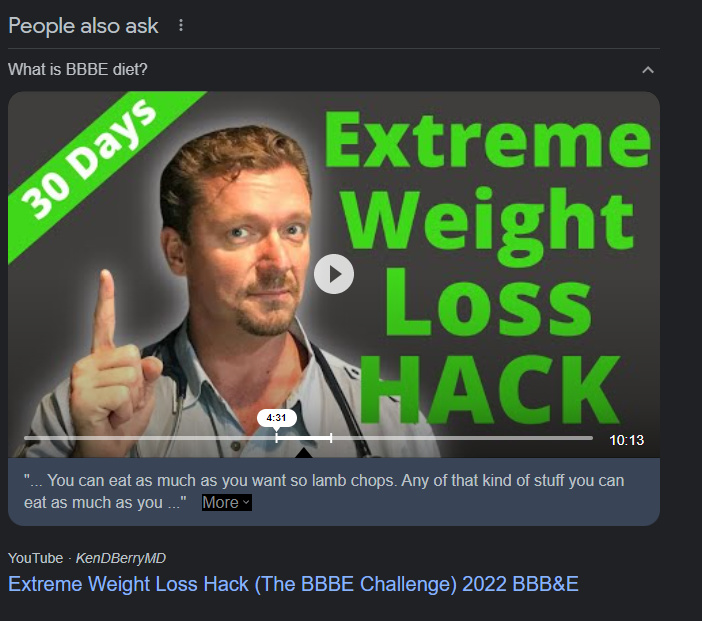 I Googled.
Never heard of it. 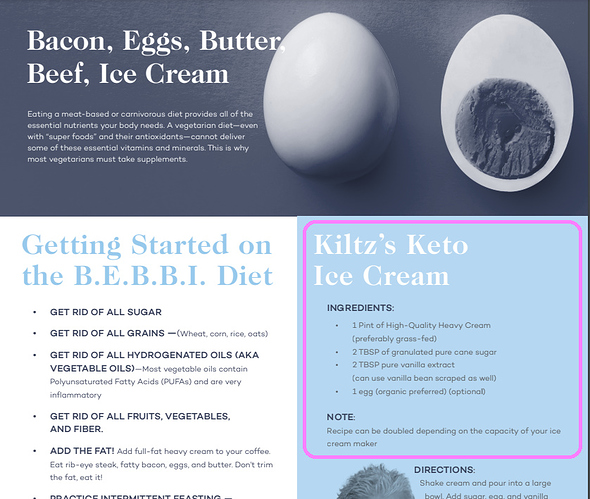 That would make me fat. I have ice cream every birthday, and can easily – EASILY – over eat it. And want more.

Yeah, I was surprised he referred to it as keto ice cream with 2 Tbl sugar (25 g carbs), but I also noticed the OP left the “I” off his acronym.

That would make me fat. I have ice cream every birthday, and can easily – EASILY – over eat it. And want more.

Wouldn’t be good for anyone, but don’t know if this is what the OP is referring to as they’ve not specified.

That’s not confusing at all… Get rid of all sugar!

That’s what I think

I was grilled on why I am not on metformin and at my age it is required by my insurance company.

Required? Wow. Just wow. Might be an idea to see if it actually is required.

What are you noticing re your Bipolar 1 and schizoaffective disorder with this way of eating? My friend has Bipolar 1 and is looking at diet (keto verging on medical keto macros) as a way to stabilize her mood. Not that she would ever try carnivore, you should hear her comments when she sees what’s on my plate! lol

BBBE, or BBB&E, is Ken Berry’s approach. He devised it when he was first learning about Carnivore - and it’s sometimes referred to as a weight loss hack or a reset in his older posts.

Nowadays, it’s his version of a strict Carnivore diet - and the idea is to stop people overcomplicating what they can or can’t eat, to remove the often asked questions about fruit/honey/milk/sweeteners/mushrooms etc, and to push people towards making more nutrient dense food choices - for example, eating beef instead of chicken.

Robert Kiltz is a fertility expert, and his BEBBI acronym is supposed to be the ‘baby’ diet. Whilst Berry is focused on getting people to lose fat and to become healthier, Kiltz is focused on younger people who can become - and want to become - pregnant.

This group of people have often embarked on traditional calorie restriction and/or low fat diets for a prolonged period of time, and their hormones are adrift. His addition of homemade ice-cream is to promote the delivery of fat - which is often feared - but is required for hormone stabilisation. It’s deliberately designed as a treat, rather than the more Carnivore approach of ‘eat some tallow’, because it’s trying to appeal to a certain subset of the population, who may not have any other impetus to attempt a predominantly Carnivore way of eating (i.e. already at goal weight, no symptoms of other illnesses etc).

I strongly suspect that the original poster is referring to Ken Berry’s BBBE approach - so it’s just shorthand for saying, “I’m following a strict, nutrient dense Carnivore way of eating.”

It might not be a bad idea, for those who aren’t like me and can gain weight at the mere mention of ice cream.

Seriously, the one thing that can pack on the pounds for me is ice cream. That’s why I limit it to a handful of times per year, preferably going to an ice cream shop to get it so there will be none left over.

Seriously, the one thing that can pack on the pounds for me is ice cream

yes! this was a massive nightmare for me too. my draw to ice cream was not natural at all in any way

I am worried about this “nurse” and will be discussing it with my Dr.

I hope this doesn’t happen but if it odes a good ol’ chat with your Dr. might have to happen? Hope everything pans out ok for you.

I don’t understand tho? required by insurance? for what reason in that I feel like you are being TOLD you have to TAKE meds? for some insurance reasons? I know I am missing some type of probably obvious issue in your post but it seems so like prescription prison of some sort? Your age automatically puts a person on metformin? and your ins. says you must? Huh?

just askin’ about it.

Sean
Where did you get to with this? Your discussion sounded like some kind of distopian nightmare… what right do they have to tell you what drugs you need to be on? I don’t get it.
Cheers
Alec

Dystopian nightmare is right. Maybe the doctor can override this requirement.