Not for me sir, but each to their own.

That is ONE testicle, I have to slice it or cut it up. You must eat them whole?

Nope, I leave testicles completely alone…apart from the occasional scratch of my own lol. Never eating lol.

I never realised that ‘nutritionally’ eating them was a ‘thing’! I thought it was just a dare on ‘I’m a Celebrity, get me outa here’ show.

I’ll get my vit C from a tablet then hahaha!

Alvaro came home sick and announced that the guy working next to him got Covid, again. And he is very, very sick, again (last time it was pneumonia? now it’s high fever but who knows what comes next).
He plans to get healthy until Wednesday as that is his first day of a 1.5 weeks long holiday and we want to take back the guinea pig. The girl got new cucumbers but we will run out of litter, Alv says hay should work for that too… But she would eat that in NO time…
Last time when this happened, the guy got Covid, Alvaro got tested negative, he had the usual cold symptoms as I got less symptoms but I wasn’t fully healthy either (and it’s super rare for him to get a cold but for me? almost unheard of). And it lasted for several days. Not fun so I plan not to get any symptoms and hope he will get healthy in no time as well.

In the end I lasted until lunch. These are the skin containing spicy bites and my leftover pork, piece 1 (I have 4 but this one was the biggest, it’s not visible on my plate as I ate from it yesterday and put some into the spicy bites too). 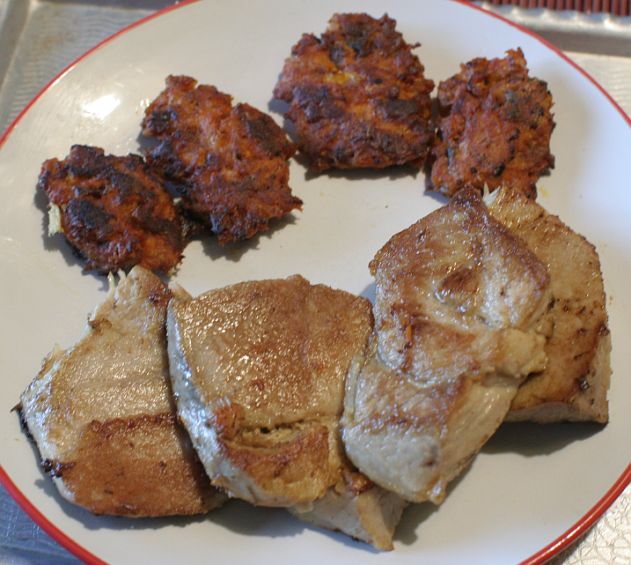 I had eggs too (now we have, like, 30 eggs left so I introduced my “not using eggs if possible” policy. not like I couldn’t get some from the village but I like challenges and we can do it for some time).

It’s possible I will stray a bit for the weekend… Alvaro has tasty plans, we have a fruit season and I apparently only have one type of fresh meat and I would get bored of it. But I have much meat right now and it’s nice and anyway, I need quite low-carb most of the time so it won’t be serious or long. We will see. And the base of my woe (typically the vast majority of what I eat) is inevitable carnivore all the time, I have no other options. Sometimes I wonder how did I eat without meat in the past? And what would I do on a meatless week now? I vaguely remember a few of my own creations, I put so much effort into them and they became obsolete so quickly

Oh well. Some are kept and Alvaro enjoys them often.

And I opened the whipping cream. It’s way before expiration time but as it happened with dairy items before, it’s not okay. But it’s not bad, per se. Merely tastes and smells like blue cheese. Me being me (the opposite of a hipochonder, fan of certain challenges and not one who easily throws out food), made an attempt to eat it. I could kind of whip the not so strong flavored liquid part… And asked Alvaro about non-dessert cream recipes as I couldn’t remember any relevant ones. And he said quiche. So we will try that.
A bit wondered about the possibility of dying but it’s about zero IMO and it’s good enough for me. I survive everything, I said. Nope, said Alvaro. Okay, everything but rabies! And then he mentioned the death cap… Okay, that too. And yes, molds can be toxic but I just don’t get that vibe from this. Exactly like blue cheese.
But tell me if any of you know some horrible blue cheese smelling mold in dairy, okay?
(I still doubt it. Alvaro thinks the possibility of me dying of it is exactly like he dying of Covid. He is very confident too if it’s about his own life.)

I plan a very porky tomorrow. I spare the eggs and don’t want them anyway, I only had some because 1. sponge cakes! nom. 2. I needed some for eating certain leftovers. And I drank some light coffee egg milks with mascarpone (light means a tiny coffee for flavor only. I have a small salt shaker filled with instant coffee and it last for so long even if I use it often… so I use it often. I will stop on Monday, weekends are always more relaxed).
But I finally have some almost ready roasts. I don’t understand, it was in the oven for 2.5 hours…? But a little pan time will be enough.

It’s not like pigs can go out and eat the grass. What’s it like where you live?

There are worries. In a few months we will see.

That’s Naghite for you, our organ eater

I lost it at the eyeballs… I remember eyeballs. There were eyeballs, right? Testicles too, described as something good so I might taste it. But no eyeballs. Or lungs. Or tripe. I have my limits, just my otherwise very lively and open-minded curiosity!

Up to you, a testicle a day keeps the doctor away.

we call all that Rocky Mt Oysters around my location but problem is they deep fry them, which is why so many love them

--------at the beach. This is hubby just unloaded the golf cart from the toyhauler, wiping out some sand and behind, right over that dune is the beach and ocean, hearing crashing waves and alot of turtle nests that are marked out there. Oh yea, let the beach trip begin 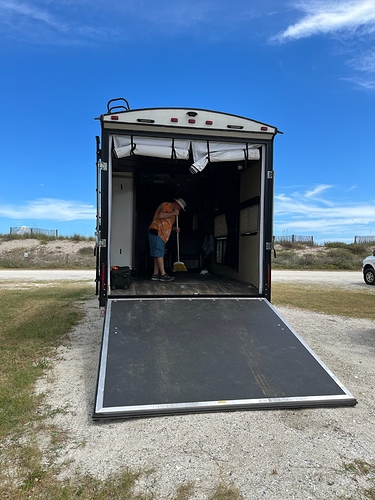 So lucky… I was at the sea exactly once in my life (well, twice but one was only a tiny walk)…

I like sea and high mountains… And my country has nothing of that.
Waterfalls too, I LOVE waterfalls. And never saw any I think. Big ones, I mean. Not our 3 meter high ones. Maybe 5 but it’s not a proper fall, just a slope.
Not like I wouldn’t like what we have

I adore the small hills and ponds and little rivers here

Okay, Fangs, have fun and rest and whatever you need, best wishes to everyone else, I went off and come back on Monday. I have circumstances. Partially my super quickly ripening pears - the season is very, very short and I skipped days already -, partially other things but I today I focus on pork and tomorrow I focus on low-carb. It won’t be extreme low but I probably will eat heavily plant-based. I try to spare the eggs now and Alvaro is cooking a wonderful plant-based dish (protein rich and tasty so my thing) that I normally eat with various dairy I lack so it will stay plant-based. And I use the chance and take a break from meat so I will have some lovely pork roast even on Monday, more tempting than on a 3rd day of a roast. And I experiment.

My last 2 days were higher-carb, around low maintenance level (so the lower edge of my probably still pretty big maintenance calories…? I couldn’t test eating a ton for a long time since ages. maybe not everyone knows it yet but once I had +1000 kcal for a month and nothing happened. and I overate like crazy for ages and gained 2 pounds a year. that’s my metabolism. wonderfully reluctant to let me gain quickly but not great enough to allow me to lose while I eat as much as I fancy).
My meat consumption is still below a pound. I expected more from my roast and it’s lovely but needed extra work and I like my eggs and cheese now.
And I had a baby cramp this dawn, maybe it’s not the not high meat but the carbs yesterday. I reached my limits. And my determination isn’t great as I already realized August isn’t a good potential carni month for me, after all. But I need to keep my carb intake in check as always so I have this on/off thing again. Weekend, my circumstances and this hot weather together… I can’t push things now. I only can depend on my desire towards my pork. But together with waking up too early it triggered a somewhat grazing day. I already ate the smallest piece of pork already and various tiny bites. But I will have another piece of pork for my main meal.

get this stupidity-----not 2 hrs here and out of the rv I go and walked down the steps perfect and put my one leg onto the rug and whammo, I hurt some ‘tiny spot’ in my knee. Came up immediately lame! Hurts like the dickens but it is no overall hurt, it is one tiny spot I can put my finger directly on near the side of the knee cap and bam the bad spot. No clue ‘what I did’ cause damn, I didn’t do anything!! -----I was limping bad like crazy and this morning the damn thing still hurts but not as bad. by tomorrow maybe ok? I am thinking this could effect metal detecting cause I was gonna go out early this morn but putting it off til tomorrow…ugh… omg someone cut this old sea hag a break ya know…weee…but ain’t really complaining, I am here, I can hobble so I am in heaven !

------------nice super hot great day but limping a bit. gonna do things slow and easy, off to beach and just live the day at the beach in slow mode fine Karen form !..yes a rum drink is in my near future but it will be booze, not mixer of course and keep it zc!

eating some sausage I precooked and brought and maybe a burger later, tonight will be ribeye on the grill…sounds good to me. hubby will golf cart up to the seafood joint and get a lb or 2 of peel eat shrimp for the meal…oh yea, real tough diet day lifestyle for me HAHA

who you directing that comment to coop and about what?

ok u hound dog, that is the vaguest post ya ever posted 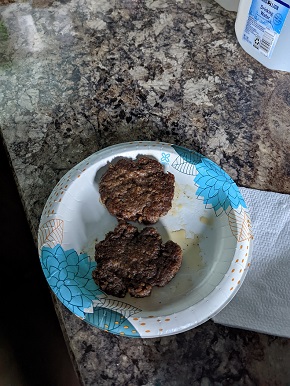 first meal early. hungry, 2 sausage warmed up I bring cooked in the freezer. I say YUM to this LOL

No clue ‘what I did’ cause damn, I didn’t do anything!!

I HATE it when something like that happens. I hope it is nothing that a little bit of rest and enjoying the beach won’t take care of.

I know when something stupid goes down one is like WTH?
but knee is improving…

and 1 hr swimming in the ocean…with hubby…and having a blast I just got jelly fish stung on both back thighs.

I hightailed it out of the water at warp speed, back to RV and got some good ol’ vingear on the stings. Feeling better but damn I got big welts , shoud be better in an hr or so…yes I am going back out swimming soon, jelly or not

ain’t gonna stop me, well it did for an hr or so is all I hope,wowza

my brain tho is saying what the heck is next

Oh, man! Nothing like some stupid non-thing causing an injury or pain. I learned I can no longer “swivel”. LOLOL
Hope your pain disappears just as mysteriously.