2 keto dudes mentioned a beer alternative made from a spirit, would it be possible to do this for wine?

Strange question, but the wines in the UK shops do not state any nutritional information.

I remember hearing on a 2 keto dudes podcast that Carl made a beer alternative from a spirit for a person who couldn’t give up beer. I can’t remember which podcast it was, but I was wondering if it could be done for wine? Then you would have the exact carb count.

Also Megan mentioned on The Obesity Podcast (can’t remember which one) that in Canada there is an app which you can use to find out the carbs in wine.

If anyone can help with any of the above information it would be great. Should I have posted this in Recipes?

No problem, I moved it for you. Unfortunately, though I could help with that, I don’t know the answers to your questions, sorry!

The app on iPhone is called LCBO.

Lots of different wines and beers out there. I drink red wines and in general you can figure about 5g carbs a serving (glass) and you will need to make it a typical pour of about 5 oz. Beer on the other hand is all over the place with light beers having less carbs and taste.

As far as an alternative to beer I have my doubts.

Not sure about the Wine but in Australia we have No Carb Beer, 0 carbs. 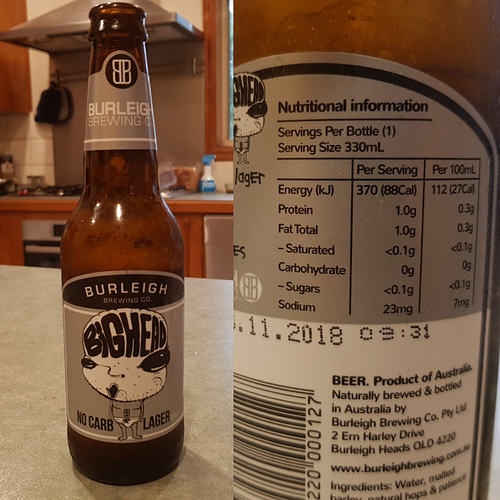 Thank you. I was then able to find the information https://idmprogram.com/festive-beverages/

I will check to see if it is any use in the UK.

So I am thinking of making a spirit infused with blueberries or raspberries, or maybe an added date, waiting a week and then diluting it with fizzy water.

Beer has the carb maltose. How can you make beer without maltose?
Sure it is not beer flavored ?
If I am forced by the situation to drink beer I choose radler (beer with lemon juice).
I also always enjoy a glass of wine… I have no idea what carbs wine has but a glass on a special occasion will not harm me (much)

I don’t think Carl was making a beer, I think the intention was to make an alcoholic substitute so the man would stay on a ketogenic lifestyle.

I remember that podcast… and was looking for the mock beer recipe today. Does anyone have it? I think it was made with irish whisky and hopps?

I remember that podcast… and was looking for the mock beer recipe today. Does anyone have it?

There’s nothing ‘mock’ about this beer!

This topic arose because of this one: I don’t like hops and especially don’t like hyper-hopped IPA beers, so I wasn’t much interested in Carl’s recipe. In addition, here in Canada each province has it’s government ‘liquor branch’ that controls all sales of alcoholic beverages and inflates prices. One might think to discourage consumption, but alas it’s only to derive revenue. That’s not the issue, though. Liquor is expensive here. So it doesn’t make sense to me to use a relatively expensive w…

Wow. I check the links out, it sounds interesting

Even if I just drink beer (IPA, usually) when I really want beer. Keto did serious changes to my alcohol consumption because I had some fav carby drinks while I wan’t into big amounts.
My “beer replacement” is lemonade. Well, carbonated water with a few drops of lemon juice. It’s lemonade to me. But it’s not beer, it only helps when I want a nice cold carbonated drink in summer, not specifically beer.
We don’t have zerocarb beer here, I am curious what it is like. Probably not good enough but maybe it’s drinkable and has a role…? Who knows? Just like I dislike erythritol now but it has its role…

Wine? I think dry wine should be quite safe (okay, it depends on the amount) and we can make a good guess about the carbs in it… Certain wines have no infos on their labels but on their website, that’s how I know my old fav wine had 20% sugar (just imagine

it’s in the past, it’s just as drinkable to me as Stroh80… the latter has the perfect sweetness for a quite sweet drink, it’s just a tad too strong for innocent me).

We don’t have zerocarb beer here, I am curious what it is like. Probably not good enough but maybe it’s drinkable…

The first question is what exactly do ‘carbs’ do for beer? The answer is they add ‘mouth feel’, ‘body’, and in some cases flavour(s). They may also assist in head retention. The second question is where does beer get the carbs to do these things? The answer is non-fermentable carbohydrates in malted grain for the most part and sometimes non-fermentable carbohydrates in other stuff added to the malted grain to produce specific beer flavours or types. Hops, for example.

‘Mouth feel’ and ‘body’ are the reasons beer is often called a ‘barley sandwich’. While 95% of any good beer is just water, a mouthful of beer tastes a lot different from a mouthful of water because it feels a lot different. And that difference is not simply the ethanol. The physical sensations caused by a mouthful of good beer make it feel much ‘thicker’, ‘richer’ and ‘heavier’ than water. This even though the solution of ethanol makes beer less dense than water!

Can we reproduce this ‘sensation of beer density’ without recourse to added carbs? I think the answer is ‘Yes!’ I think I have already demonstrated this in my experiments noted above.

Now I agree that it is unlikely any commercial brewery is going to take the risk of producing a zero carb beer similar to what I’ve been doing. But that doesn’t mean it can’t be done. Done well and result in a class beer comparable to any quality beer you can name.

Beer feels pretty much water to me, with extra flavors… At least the cheaper but good enough light beers I usually drink, dark ones are very different, of course.
People seem to be similar considering they drink beer just like water… I couldn’t drink more than one but that’s an excessive amount too. I could do it but I rather not. So yeah, beer is a tad different, that’s why 1-2dl is almost always enough (despite feeling thin like water and barely alcoholic) and I probably would drink much less using dark beer… But it’s probably not this simple, there are various factors making someone drink more or less.