So I am officially 10 days into my IF and keto program. I have learned a lot and am still trying to find exactly what is right for me. I started with an 81 hr fast, which is crazy I know, but it got me into ketosis. I am pretty sure I am no longer in ketosis. So my question is, what things stop ketosis from occurring? Once I am out of ketosis, I will need another extended fast to return to it? I am not sure if I misunderstood the information but I thought staying in ketosis even when not fasting is ideal, correct? As the whole point for me is switching from burning sugars to fats, or so I thought. I ordered some ketone testing strips so I can monitor the levels more closely. I am just bummed because I had to really dedicate myself to such a long fast and was really proud when the symptoms of ketosis were evident.

Other than that, I am really enjoying learning and implementing these positive changes into my life. I have been seriously trying to lose weight since the 10th of October when the scale at the doctor said 296. I have lost 22 pounds (I am sure largely water but hey a win is a win), about 12 of which have been since I began the fast 10 days ago. I have decided on a 48/24 schedule and find that is working ok. I am still tweaking it to find what is most manageable for me and I plan to slow down on the fasting once I get a little closer to my goal weight. I am probably annoying to everyone around me as all i can do is talk about my program, I have read so much literature that I swear if others read it they would switch over in an instant. It really is life changing. I no longer feel powerless over food and am naturally becoming more active as it just feels good…plus gotta get those steps in right?

I am having a tough time with protein, after tracking all my stats it is a little low. Is there a g/day I should be trying to attain? I looked into protein supplements but they seem pretty expensive. The carbs go fast, which is why the tracking app is super helpful. I have yet to be able to consume all 1500 calories of my daily goal. I eat when I feel hungry on non fast days but still dont reach that number. All I do know is I dont feel hungry and physically I am in much better condition already. I am really having to get after myself to drink water, over the last few days, my water numbers have fallen. (One of the reasons I am pretty sure I am not in ketosis is I dont have overwhelming thirst like I did after getting there my first fast)

I appreciate your time and feedback!!! Take care!!!

Only way out of ketosis is to eat higher than say, like, 50 grams or more of carbohydrates.

Most need under 50g to hit good keto…most eat in the 10-20 range in carbs for the day. This puts and keeps you in ketosis.

Ketosis is just taking the carbs out of your menu and staying low enough on what carbs you do eat to stay in ketosis.

Super congrats on your loss! Happy for you.

Just follow a natural pattern of eating for you. Hungry, eat

Not hungry then do not worry on bit about it. But always eat when you are hungry and get into a very natural state for yourself.

As you keto adapt your body things fall away. Like some get that bad breath/taste situation burning new ketones. It leaves. Some have super thirst, it balances out later. Some have keto flu and other troubles that leave with time. So just monitor yourself and work into your keto strong and I bet great results come your way.

No you do not have to fast to be in keto ever. You only need to control that carb count.

Best of luck, well, you don’t need it truly, you sound like you are doing very well.

Ketosis is a result of using fat for fuel instead of glucose/carbs. If you aren’t giving your body carbs then it has no choice but to use ketones, a byproduct of fat burning. If you did a fast and jumped directly to under 20 g of carbs a day, you’re almost definitely in a state of ketosis.

Things that can stop ketosis from occurring are eating carbohydrates. Your body will go back to using that as fuel until there isn’t anymore then switch back over to using ketones. No, you don’t need another fast (although that will also work) if you don’t want to. You can simply eat suitable amount of fat/protein and as few carbs as possible to force ketosis.

You don’t need to purchase protein supplements, there’s plenty of protein in meat and other foods. The tracking app you are using should determine the appropriate amount of protein you need based on your info. Keep going, you’re doing great.

I have lost 22 pounds

Wow! That took me a few months to lose that much, that is amazing. You are doing great, and I agree with @PetaMarie with all that she said above.

No you do not have to fast to be in keto ever. You only need to control that carb count.

As long as you keep those carbs to 20 grams or less, and get your calories from proteins and the healthy fats, you will be fine =). You are probably still in Ketosis, as long as you are doing that. I have been on Keto since February and I have never bought any of the strips or monitors. They are sold more for people with type 2 diabetes, and I totally understand them buying them. I know that many people like having them to know for sure, etc. but they are not necessary. I have never bought them because they are expensive.

I think that you are doing great. Keep up the good work!

Generally, if you consume sub-20 grams of carbs per day and remain functioning, you are in ketosis. As others have already said, if you don’t give your metabolism carbs/glucose it has no other choice than to utilize fat and its byproduct ketones.

Why exactly to you think you are no longer in ketosis? If you lost 22 pounds in 10 days, that is quite phenomenal, even if most of it was water. It’s water you’re no longer carrying around all day. Lack of hunger is a key sign that your metabolism is making up your caloric intake deficit with stored body fat. I presume that’s what you want to happen.

As for total calories consumed daily, I suggest you go by your hunger. If you don’t feel hungry you’re OK. Your daily energy requirements are met by the sum of whatever nutrients you eat and whatever energy you can get from stored fat. Hunger tells you you’re not getting enough. There is a daily limit to how much body fat you can metabolize and eventually you will reach that limit. Then you will start to feel hungry before meals. That tells you to start eating a little more. The important thing to keep in mind is it’s OK to feel hungry before you eat, but not OK to feel hungry within a couple hours after you eat. That’s your metabolism telling you to eat more. The very worst thing you can do is allow yourself to feel hungry all the time. That will slow your metabolism, just like it happens on CICO diets. It gets harder and harder to lose less and less weight until finally you give in to the chronic hunger.

PS: No, you don’t have to do another 81 hour fast to get back into keto. Just stop eating carbs! And, emphatically NO it is not crazy to begin keto with a multi-day fast. I did four days when I started. It’s a quick and easy way to initiate ketosis. It’s just that a lot of people think it must be a painful thing to do. For me in only hurt on day 2.

Thank you for your reply…I appreciate the encouragement.

Thank you for your feedback, I really appreciate it!

Thank you so much for your feedback. I feel the exact same way, when I am hungry I will eat. I ended my last fast 7 hours early because I finally wanted to eat. I lost 22 pounds since the 10th of October, probably 12 to 14 since IF and Keto. I do drink 2Tbs of coconut oil in my coffee in the morning, but I am kind of on the fence about it. It is only 243 calories, but is it messing with my ketosis? So cool to finally run across someone who began like I did and has had success. For now I am tracking everything just to make sure I dont get led astray by those sneaky carbs

Coconut oil is one of the best things you can eat. Assuming you don’t have any problems with it. It will help keep you in ketosis.

So my question is, what things stop ketosis from occurring? Once I am out of ketosis, I will need another extended fast to return to it?

It is generally easy to initiate ketosis and eat something while doing it, without feeling like your starving to death but your actually fasting:

Glass of water mixed with two table spoons of Apple Cider Vinegar and Lemon Juice before you eat:

Once or twice a day for three days:

Then you can start adding carbohydrates to train your mitochondria to also oxidize glucose (not burn for fuel directly) more efficiently. 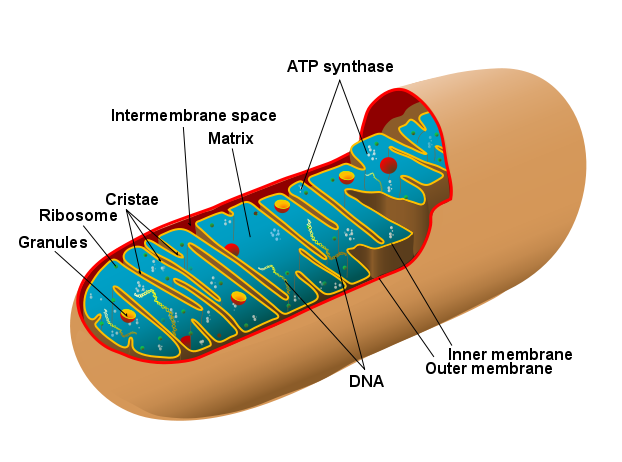 Mitochondrial Oxidative Biogenesis: trains your mitochondria to oxidize (not process glucose for storage as lipid droplets in fat cells once glycogen stores have been replenished) both fat and glucose for fuel evenly. 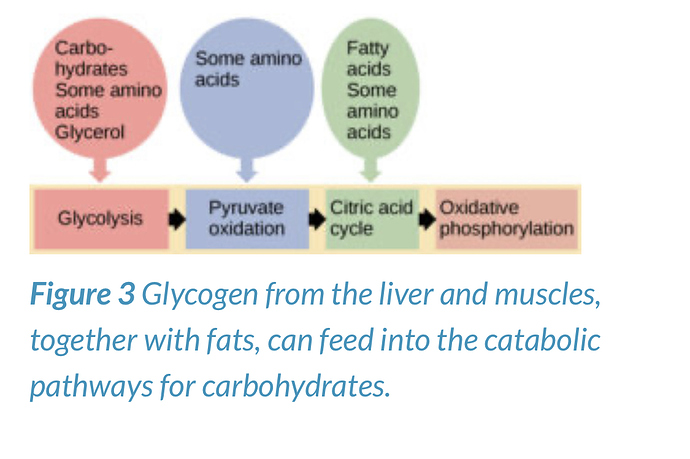 See also: What can inhibit lipolysis besides insulin & When somebody loses weight, where does the fat go?

[1] “…In aerobic cells, pyruvate formed in glycolysis is transported into the mitochondria, where it is oxidized by O2 to CO2. Via chemiosmotic coupling, the oxidation of pyruvate in the mitochondria generates the bulk of the ATP produced during the conversion of glucose to CO2. …More

[4] “…Glycolysis/Glucose Oxidation Insulin does not exert any direct effect on this enzyme, which is primarily regulated by the energy (ATP) and fuel (citrate, acetyl-CoA) status of the cell. However, insulin indirectly stimulates PFK by increasing fructose-2,6-bisphosphate, a potent activator of PFK. …More

[5] “…Effect of insulin on oxidation of intracellularly and extracellularly derived glucose in patients with NIDDM. Evidence for primary defect in glucose transport and/or phosphorylation but not oxidation. …” …More

[7] “…Glucose reacts with molecular oxygen to produce carbon dioxide and water. The carbon atoms in glucose are oxidized. That is, they lose electron and go to a higher oxidation state. The oxygen atoms in molecular oxygen are reduced. …” …More

Thank you for your information…I appreciate the dietary suggestions too, I am a bit overwhelmed thinking about it.

Good to know, I will continue to do that…I do see a difference and I just finished a 48 hour fast that was a breeze and I know that is part of the reason