WHO statement meat and cancer

I seem to remember that the WHO withdrew their bs statement about red meat causing cancer, but I’m buggered if I can find anything like that. Was I just imagining it?

Not anything I’ve heard. But of course the scare is put on the front page, and the retraction is buried on page 43. But if you search on “IARC red meat” that ought to turn something up.

You might want to consider using a search engine other than Google, however, because people have been complaining about biased results for a number of years, now. I guess after Brin sold out, “Don’t be evil” stopped being the company mantra.

I haven’t been able to find anything except from one of the IARC members saying it was a ■■■■ fest. That might be what I was recalling.

If they did, like all backpedals that make them look stupid, it would be done silently.

Health scares are going out of fashion. Coming up: the world will come to an end in (12? 30? years?) so it’ll be environmental agencies calling for lockdowns soon. (They already are).

I think that’s even more out of fashion than the health scares. How many times have dates been set, come and gone.

I mean come on. 3 people have died worldwide from monkeypox. Better run out and get your jab, or you may be the 4th. #scamdemic

WHO, why would you even bother with that crowd. A lot of good people whos’ professional lives have been hijacked for various political and financial gains. They have had 50 years to get diets right but instead sent millions to an early grave because of their views and advice pandering to big food processors. And then theres the Covid advice, its not a problem, encouraging prople to fly around the world to effectively spread it because if you didn’t it would affect trade of developing nations, and where did they get that great advice from ??? and I thought they were supposed to be about health and not economic advisers… Well they don’t like meat, well nor do vegans and some other religious groups, but should we listen to them… NO.
Let them show us some tangible improvements in dietary health due to their good guidance, like improvements in obesity, diabetes2, heart disease, cancer and Alzheimers, first, …these diseases are now the highest that they have ever been in the worlds history, and substantially increased even in the last ten years …Ha Ha Ha Ha Ha … to the WHO

Does this mean I can carry on drinking regardless?

The World Health Organization (WHO) is a specialized agency of the United Nations responsible for international public health. The WHO Constitution states its main objective as “the attainment by all peoples of the highest possible level of health”.

it is what it is and we all accept it cause I guess we have 0 other choices due to their massive influence out there???

I seem to remember that the WHO withdrew their bs statement about red meat causing cancer, but I’m buggered if I can find anything like that. Was I just imagining it?

A prime example of taking advice from data rather than evidence.
I saw 3 black cats in the way home, therefore, all cats are black.

People that eat a lot of red meat are statistically more likely to get cancer. This is true, but that’s only because the data is skewed. The data is collected from a diet survey of ancer patients.

So really the statement should have always been, ‘people that have cancer, ate red meat’.

The problem with the data is that people who eat a lot of red meat are likely to do lots if things that are not healthy. Like drink, smoke, not take medical or diet advice, and eat bad foods.
The majority of red meats are eaten as beef mince or joints which suggest heavy home cooking or burgers which suggest fast food.

I was coming to put variables make scientific studies of nutrition hard to find correct information. Yes studies have been done of red meat and cancer. But of the patients studied a lot of them drank, smoked, didn’t exercise, among a multitude of other environmental factors.

There are also other flaws in the studies that the IARC relied on, and they ignored certain other studies that conflicted with their belief that red meat causes cancer. Dr. Georgia Ede has done a couple of lectures, available on YouTube, in which she discusses the available evidence and what the IARC did and did not look at.

Much of the evidence, as I recall, is from rodent studies in which the rats were first fed a carcinogen during the run-up period, before being fed red meat during the main part of the study. I’m not sure why that was the procedure the researchers adopted, and in any case, the results (at least from Dr. Ede’s description of them) don’t appear to have been all that conclusive.

Furthermore, many of these studies lay a great deal of stress on the nitrate content of meat, but most of the plants we are encouraged to eat contain far more nitrate per gram than meat does. Not only that, but the nitrates in the plants are the exact same chemicals as the nitrates found in meat, so I’ve never understood what mystical property of meat makes the meat nitrates so dangerous, when the exact same nitrates in plants are apparently supposed to be good for us. 'Tis a puzzlement!

Here’s a blog posting on this: 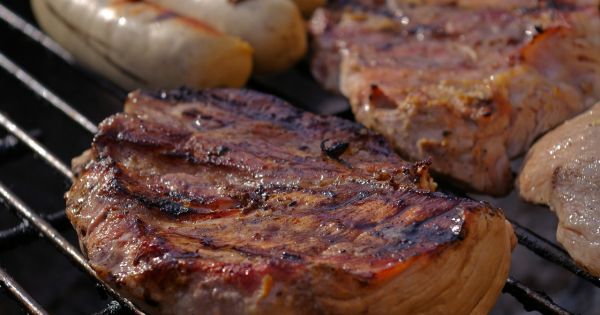 The WHO's report on red and processed meat and cancer finds no evidence against meat and clear evidence of bias. This report should be viewed as a political document not a scientific one. Read my detailed critique.