What is the longest fast that you've completed?

I intend to stay on a high fat, very low carb (less than 20 grams per day) with most of the carbs coming from low carb veggies and low protein (no more than 30 grams per day) for the first 10 days to prevent any refeeding issues.

Both refeeding syndrome and refeeding edema are caused by insulin spikes so by keeping insulin very low the risk for either of those problems can be lowered significantly. (Since my lab work showed all electrolytes within a normal range and I began supplementing with thiamine and a full spectrum B vitamin in addition to the salt, potassium, magnesium and phosphorous that I have been using for months I don’t expect any problems at all with refeeding syndrome, but edema is very common when refeeding causes those insulin surges.)

If you are already in ketosis then the broth may not have been providing enough salt.

Personally I’ve found I need about a teaspoon and a half per day on most days to keep my blood pressure up. I just cap Himalayan or sea salt in “00” size gel caps and take one or two caps spaced out over the course of the day.

Personally I’ve found I need about a teaspoon and a half per day on most days to keep my blood pressure up.

I feel like an idiot… Thank you for the reminder!
My normal BP is 90/60 but I’ve been having episodes of hypotension (usually after workouts or postural) during extended fasting. I’ve been conscious about increasing salt intake but probably not enough.

That’s part of why I started a separate thread yesterday about salt tablets - I eat a LOT of salt to combat that lost through low carb / ZC and am still a bit confused about the sodium vs salt and amounts to have, hence that post and getting The Salt Fix - hoping it will arrive today - I know it is in transit!

I was having 3 - 4 teaspoons of salt. Straight salt on my tongue, and salt in my broth - hence why I wrote “salty broth”. I still have no idea what went wrong, My nutritional therapist thinks my adrenals are being overworked and the longer fast didn’t help my cortisol levels. It is hard to gauge these things.

I fasted nine days as my longest. I was going to do 3 to 5; but felt so good I kept going until I felt it wasnt right. I did have salt water with it.

I started building up fasting from this year, it was a great experience and i will continue to discover the benefits and building to go longer.
February 1 day
March 3 days
April 3 days
May 5 days
June 6 days
July /
August /
September 6 days
October 2 days
This month i will try to do alternate week fast, 5 days - 2 days refeed - 5 days … till end of december. Will be a new experience!

I have accomplished two fasts by now, a 72 hour just to see the effects of autophagy, I started without being on ketosis and first 48 hours were a pain but I got rid off a nail fungus which was the first visible proof of autophagy. The second one was a 72 hour fast as well and as I had gotten good results with the first one I wanted to see if autophagy could get rid off the cold I had at that time, surprisingly yes but oh man… horrible experience, it was very painful but yeah I got rid off it before the 36 hour mark. (Both water only fasts)

Excellant and dont forget the mineral salts. It makes a HUGE difference. I use ancient minerals and Himalayan salt.

Thanks. Here’s a copy of the refeed info I provided in another site.

I’m on day 10 now. I’ve kept to a very strict Keto protocol with the only carbs coming from steamed broccoli, cauliflower, avocados or small quantities of Macadamia or pecan butters. Total protein has been capped at 30 grams per day to minimize the risk of refeeding edema or refeeding syndrome. On day 10 I’ve had no refeeding issues of any sort: no edema, no overeating, nor rebound weight gain, no digestive issues.

I started Thiamine and a full spectrum B vitamins two days prior to breaking. These were added to the potassium, magnesium salt, phosphorous and multivitamin I was already supplementing with.

And, probably the most important question of all, but certainly not the one most often asked: How do you intend to break the fast?

I am currently on day five of the refeeding process,and despite my own personal concerns and worries, everything has been going very smoothly!
No digestive issues, no cravings, no urge to binge eat.

My first solid food after a little more than four months of fasting was 1/2 of a perfectly ripe avocado. I had expected to find myself very full from that, but found myself wanting. - more! So, two hours later the second half followed. What I had not expected was to find the avocado left a very sweet aftertaste that lingered for hours! Four hours later another whole avocado (they were both small) and with a second coffee with cream for the day that was it!

Day two: coffee with cream and a whole avocado in the morning. Two tablespoons of macadamia butter mid day
And a bowl of steamed broccoli with butter and MCT oil late afternoon. As the avocado had done, the broccoli left an incredibly sweet aftertaste lingering the rest of the evening.

Day three: I woke up wanting: steamed broccolli. So, broccolli it was - a larger serving than yesterday.
Two tablespoons of macadamia butter later and then a large serving of --steamed broccolli. I think my body was obviously craving the nutrients from it!

Day four - woke up really wanting protein! So, I decided to be either brave or foolhardy and try a small cube of emmentaller cheese - very well chewed. That went well with no digestive issues. Another day of avocado and steamed broccolli and 2 more ounces of cheese in the evening. Between the veggies and the cheese, that brought my total protein intake up to about 30 grams which is the max. amount for the first 10 days.

Day five (today) no swelling from the protein (yay!)
One more avocado - I think I’m getting a little bored with them at the moment - and a tablespoon of pecan butter.
The pecan butter was - OK. not anywhere as good as I had expected though. I tried some soft salad greens a little bit ago with a thinly sliced raw mushroom and decided that while the mushroom was great I’m not quite ready for raw greens. So, I think I’ll go with steamed cauliflower later in the day and about 3 oz. of cheese!

I was expecting to have to do battle with a carb monster yesterday or today - so far he hasn’t put in an appearance!
(Maybe I killed him by starving him to death? Maybe he died from boredom? Maybe he’s just hibernating - hoping I’ll wake him up with a sugar fix?)

Just a tiny bit disappointed - here I was emotionally all set up to prove I COULD defeat him with sheer willpower!

It’s certainly a learning curve for all of us!

thanks for the recap. Nicely done, the fast and refeed.

5 days with a goal of 14. It is going well so far with a cup of broth in the early evening.

I was expecting to have to do battle with a carb monster yesterday or today - so far he hasn’t put in an appearance!

(Maybe I killed him by starving him to death? Maybe he died from boredom? Maybe he’s just hibernating - hoping I’ll wake him up with a sugar fix?)

Ha ha good one! ANd thanks for documenting. Amazing job!

If we define fasting as not eating food.

For 55.5 years I ate carbage instead of food.

Now that I eat food, I eat 5 days a week and fast for 60 hours, and I just finished a 132 hour fast this last Friday.

For 55.5 years I ate carbage instead of food

Ha! That’s exactly how I view carbage: it ain’t food.

7 days. I broke it because my blood sugar was 54 mg/dcl

WOW!! Congratulations!! Over 4 months of fasting is a huge achievement, very impressive. And your results are great, and well deserved. I have a few annoying questions if you don't mind:

I have supplemented with the RDI with salt, potassium, magnesium and phosphorous and also take a high quality whole food based multivitamin, CoQ10, and purified fish oil. I have a medical background and have felt confident in my ability to monitor myself for any signs of physiological stress or complications.

May I ask how much of the sodium, potassium, magnesium and phosphorous where you taking each day? Also, this is the first i hear of supplementing with phosphorous, so I was wondering why it would be necessary, if it is not to much hassle to explain that is. I have never been able to go past 7 days, I just start feeling horrible and can’t continue, and I think maybe I am not supplementing correctly.

I’m on day 46 of a Fung style modified fast. ( A little heavy cream in coffee once a day and a couple of cups bullion with added Himalayan salt).

When you say bullion,do you mean the store bought cubes? If so,which ones?

Phosphorous only becomes necessary once you have fasted longer than 30 or 40 days. It’s one of the main electrolytes involved in Refeeding Syndrome - a rare but potentially fatal complication of breaking an extended fast with foods that cause a strong insulin release.

The following guidelines are what I and many others use for supplementing the other electrolytes. Not getting enough salt is probably the most common reason people can’t get past the first week.

Best of luck to you! 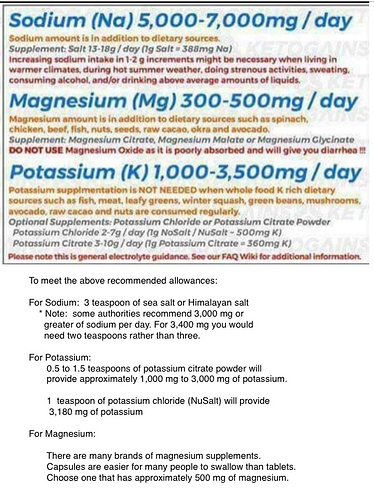 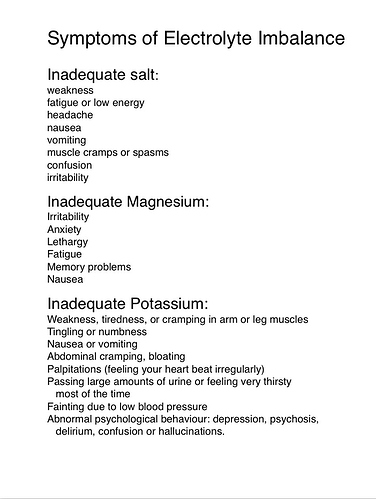