Yeah, I was thinking along similar lines. (First, just a disclaimer, I’m no expert by no means, but I did do a ton of research the first full year when I started this WOE.) And in my personal opinion, based off both my results & reading a lot of others (mostly on here) I think there will be times that the body will plateau, even if you’re staying Keto. - And this may be for numerous reasons. One I believe is that so your body itself can just be halting things to adjust to the loss you already achieved? Almost like a reset of sorts & maybe this is something the body needs to do? But I’ve heard too many complain and freak out, when they are not doing anything wrong. Its just there’s too many variables to let it bother you. Sometimes things happen you won’t understand, but I’d say don’t fight it, but let things do what they need to do.

Such is what I had to do with the surgery. Some told me up front weight gain was not unexpected, since it takes so much out of the body just healing, and during that time, things just don’t work the same. … But I too have been staying closer to TMAD though I do prefer OMAD. But I’ve also read enough up on doing OMAD, to know there is a lot of folks who believe doing OMAD for long periods of time, can/will? slow your metabolism. (Though I can’t prove or deny this, I trie to make sure not to do them constantly. But instead, try to mix things up to keep the system guessing and not adjust.)

Throwing some Steak into the Sous Vide for Steak & Shrimp tomorrow. Not sure if lunch will show? 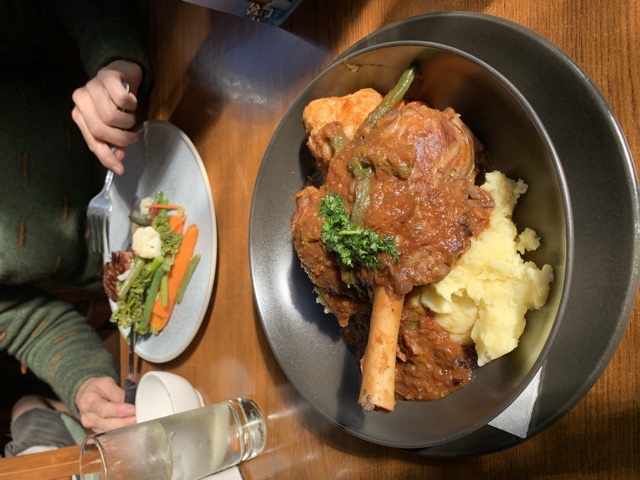 Big lamb shank at an Irish pub on holidays. More potato mash than most would like, but no problem to leave some behind. Absolutely delicious real food!

I never even ate celery stalk, it doesn’t look even remotely edible to me, actually.
I tried PB once, it wasn’t good. Odd as I was seriously addicted to peanuts but only strongly roasted and salted…

I have no good photos again, sorry. 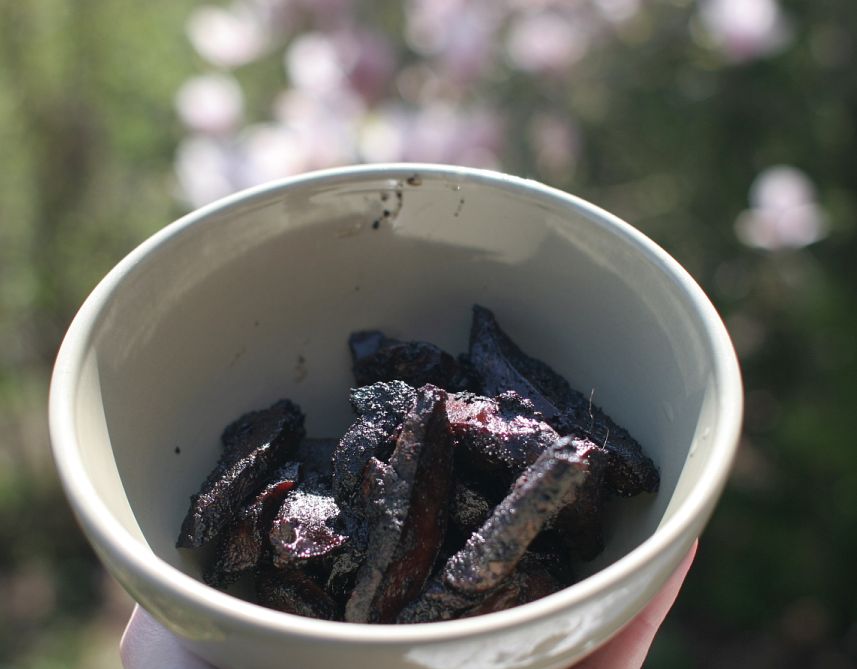 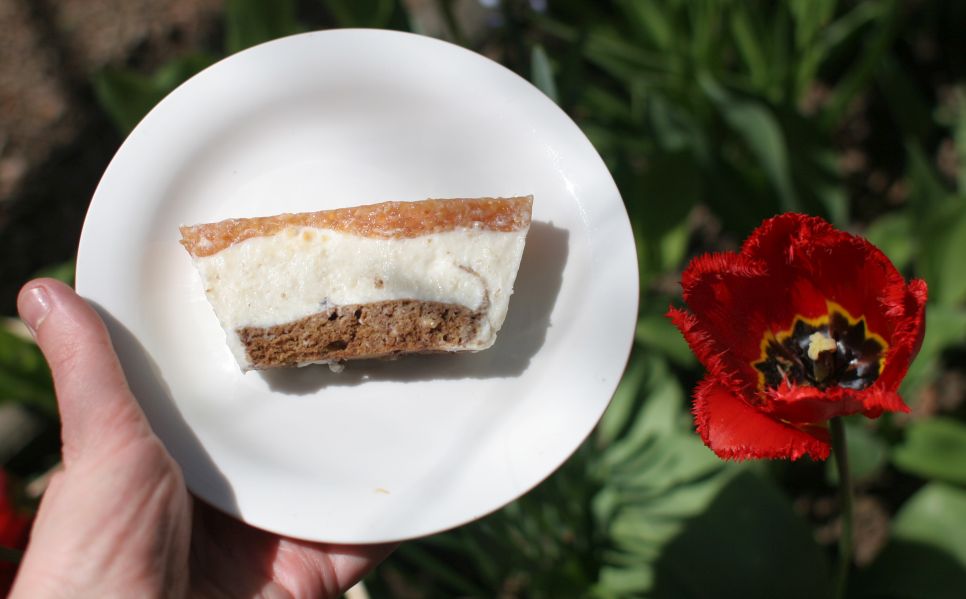 Pig heart (too hard and chewy today for some reason but still good tasting. we both love heart) and cheesecake (with raspberry jelly on top. I prefer it red but I have much more yellow raspberries. I defrosted the last box). Keto enough, I started to have serious problems with erythritol (kinda neutral taste still but it… burns? like too much salt. just with sweetener. yuck) so I used xylitol as well. But the majority of the cake is for my SO (the whole cake had 8-9 slices like this above). My biased body doesn’t enjoy sweets so much, my carnivore times changed me. I may want to eat some but I don’t really enjoy it. But this cheesecake is good, I love mascarpone and cream. But erythritol doesn’t work for me anymore and the other (nearly?) calorieless sweeteners never had a chance. So xylitol, sugars or no sweets

Not a problem as long as I have enough meat with the proper variety. And of course, my beloved eggs. I usually eat simple eggs, nothing interesting to make a photo of. I made marshmallow a few days ago though. I had leftover egg whites and someone to eat up the bigger part of it. I play a lot with gelatin now.

Yeah, they’re not bad and they are nice after eating something salty or spicy. … But my Wife picks them up from time to time, maybe a few times a year. She just happened to see that they were on sale for about 1/2 their regular price so picked up a couple boxes. Think there’s 4 in the box? And usually runs about $5. She said these were $2.49. … Couldn’t tell ya all the flavors, but the Chocolate Cheesecake she got is apparently a newer one, along with Chocolate Brownie and Salted Caramel to name a few.

I recently picked up a box of 8. They will last me a very long time, I just enjoy a few spoonful topped with blueberries sometimes in the afternoon for snacks.
As per our weight loss conversation, I do trust my body now to tell me what is right. I only fluctuate by about 3 pounds, but I have no health issues that require a lot of healing. If I have the urge to eat, I eat, but I watch my carbs carefully. I stay with 20 most of the time, but once in a while I go as high as 50. I am cool with a long stall, I am still enjoying the benefits of my new body. It feels so good not to carry all the weight and to be able to buy clothes I like, off the rack. My energy is good. I imagine it will take me just as much time to lose the remaining 40 pounds as it took to lose the 115. If not longer. No problem, I love my lifestyle and I am not morbidly obese anymore. I will be Keto for the rest of my life and enjoy it, it hits the spot for me.

Yep, that’s all that matters overall. If you’re feeling great, why change things.

Lunch… Made some Crunchy BLT Chaffles, and cooked up 3 Pepper/Onion Sausages. Also had an Almond Milk and Grapefruit Citrus Zevia. And ate a few Habanero BBQ Almonds & Sunflower Seeds. 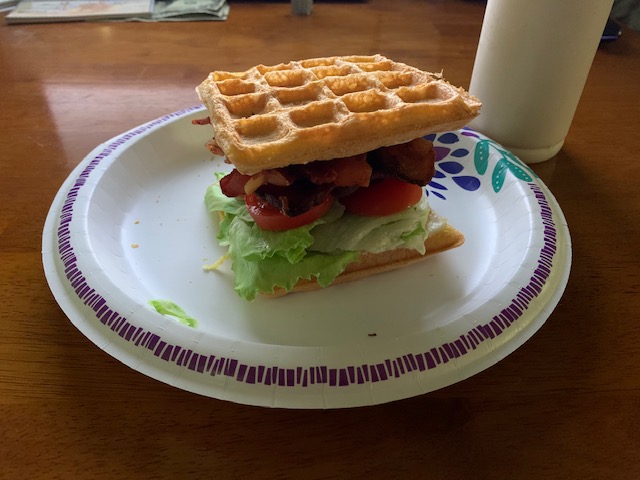 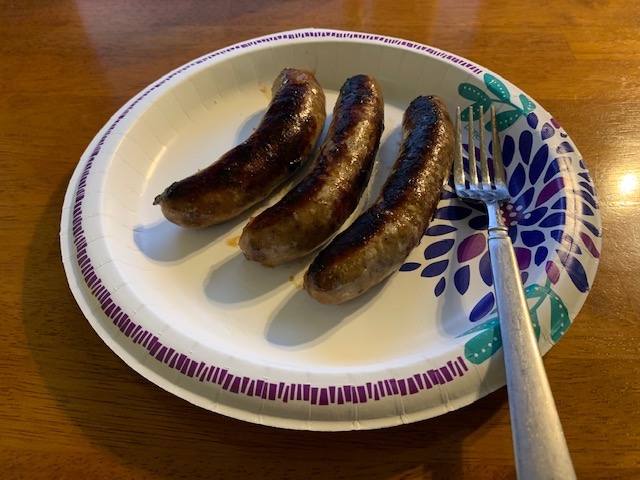 There’s times you make an effort and put together the most fantastic meal for yourself. And then there’s the times you hop over to In-N-Out and grab something from their menu that ticks all your tastebud boxes. I have to pinch myself sometimes that I’m in California and lucky to have several of these just a ten minute drive away.

I normally order a couple of Double Doubles protein style (lettuce wrapped) with no tomato and no spread, but wasn’t in the mood for lettuce so I picked up a couple of Flying Dutchmen instead.

It’s just beef and cheese. But it’s so good. 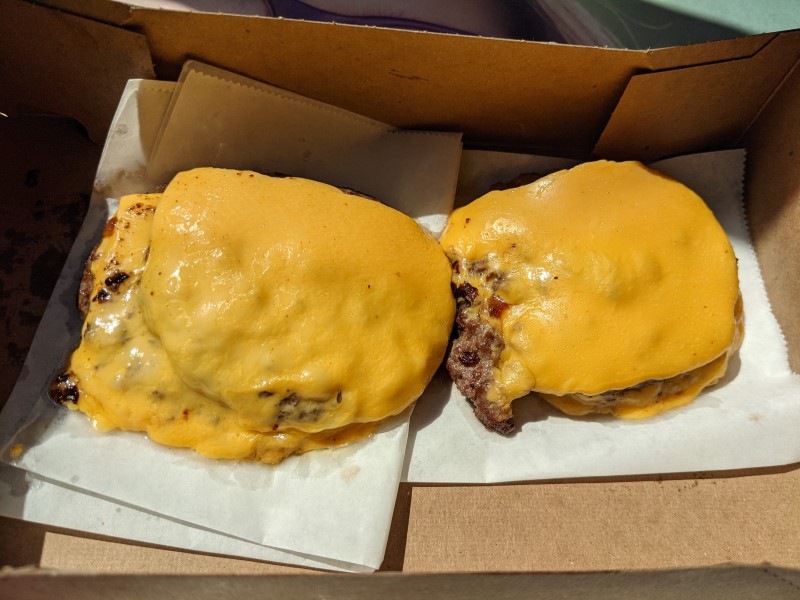 Very jealous we don’t have a In-N-Out around me! I would probably utilize it too much though lol!

I would probably utilize it too much though lol!

Not sure what would be wrong with that!

Dinner… 24 hr. Sous Vide Top Sirloin, and some Steamed Shrimp. Also had another Halo Bar. … Really want to Fast now, but not sure if I will start tonight, or wait till after tomorrow night’s Dinner? 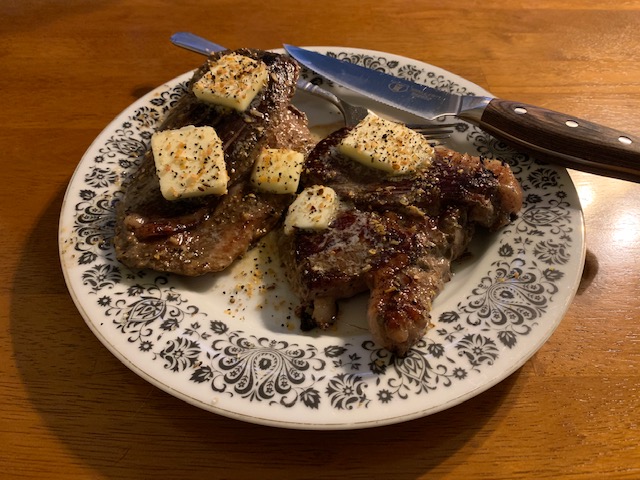 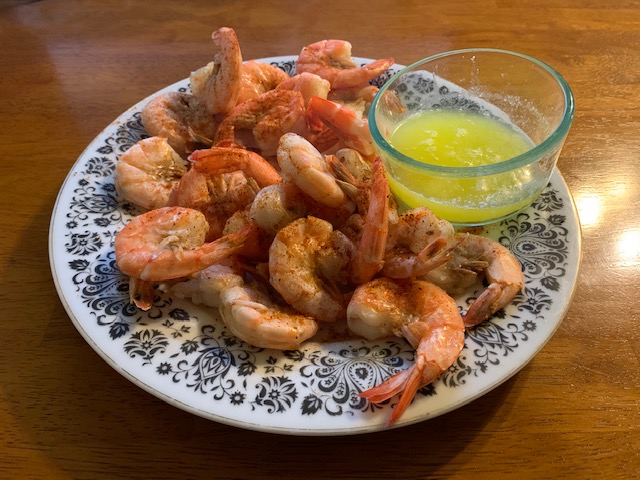 Mostly I do carnivore, but idk what they cook them in etc, I assume probably not the best of oils that are on the grill, not a huge thing for some. But I’m going for as little inflammation as possible from stuff and have a very limited ingredient list I use for my auto immune. Plus it’s just cheaper to cook burgers at home for me lol.

I make bun-less bacon cheese burgers on my countertop grill all the time. I love them. They take minutes to fix. If I were out and about and hungry, I would likely buy the same someplace if it were available, but I would never go out to buy them, much more time consuming, expensive, and with less quality control.

But, definitely agreed, that sort of burger is delicious and hits the spot, regardless of who made it.

Thanks for the reminder. Tomorrow is shopping day, and I like to get a few cooked beef patties from the fast-food drive-through. But I often forget or am too rushed.

OMAD … Got little sleep, tired, and a headache. Also just got back from running to Lowes… So I just had some Pork Rinds with some Potted Meat & Sardine, while we just threw in some 1/4 lb. Hotdogs. (I had 3) … Will probably eat a few of the Almonds & drank an Almond Milk. Might grab a Halo Bar. 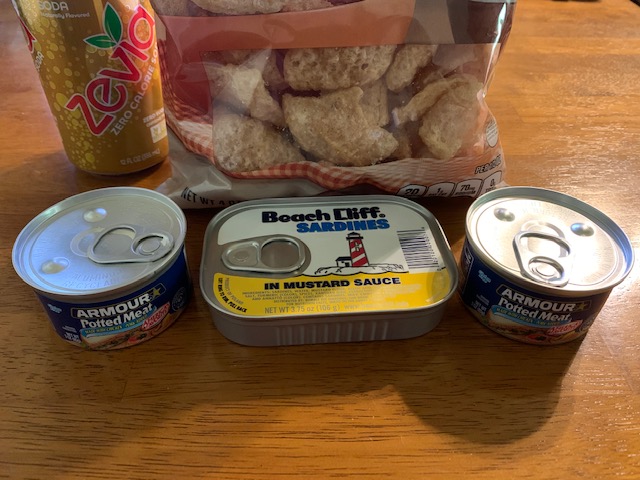 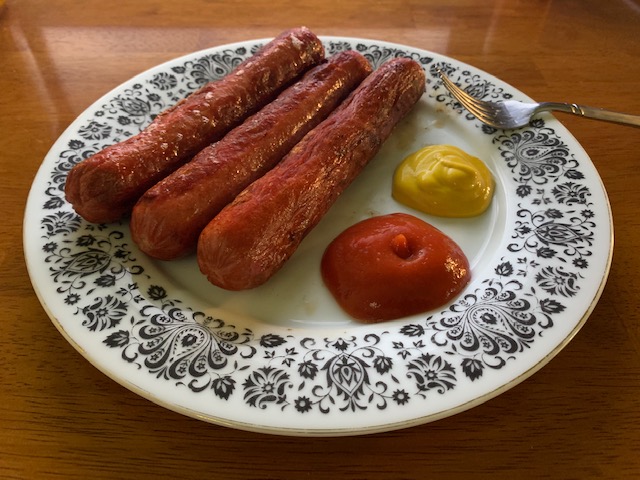 Taking a Personal day, and working in the basement and around the house… Wife made me some Fried Eggs, Sausage links and Patties ground up. Also eating some Almonds and Sunflower Seeds. 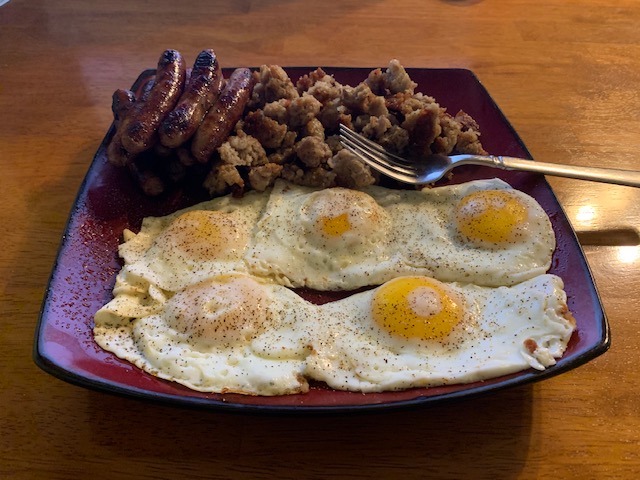 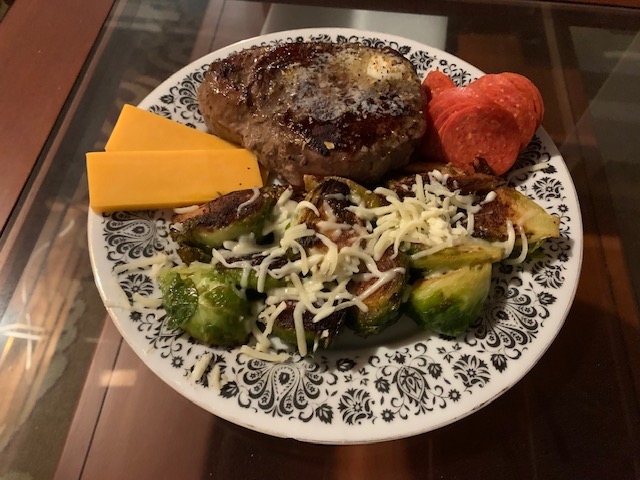 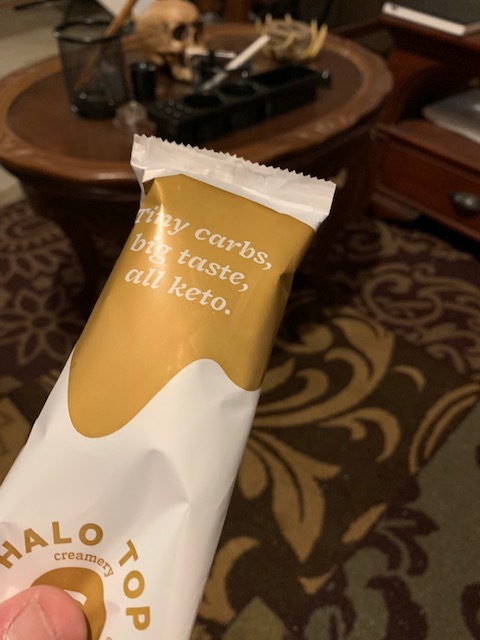 It all looks mouth watering. 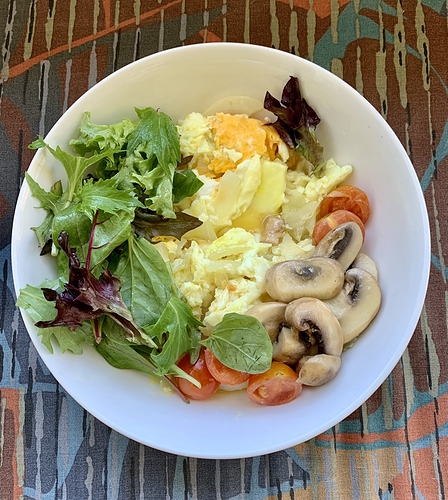 I don’t know why all my pics are sideways. I try altering afterwards. Sorry about the sore necks.

Brunch! 4 eggs fried in butter and salt with purple onion, tomato and lettuce with a bit of salt. It was delicious and satisfying and I had to stop half way through. Just finished it now at 6pm