What Blood Glucose should Be?

It’s just glucose sparing. I don’t usually eat breakfast, and here is my data from 2017 (multiply by 18 to get US units): 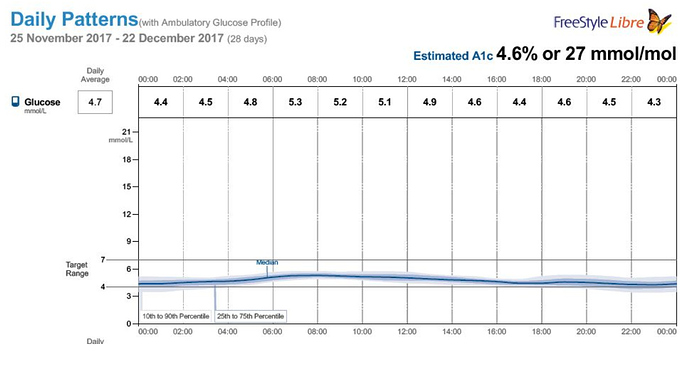 The Contour Next Ez at one time was 100% accurate in a study (which means it was within 15% of real blood sugar each time), so that’s what I like to use for blood sugar.

I didn’t know they had +/-15% accuracy. It’s better than nothing, but doesn’t seem great. What on earth is the accuracy of ketone meters? Is there even a compliance standard for those?

I’d be curious to see what the combined accuracy range is for GKI. It’s additive obviously. It wouldn’t be particularly compelling to say "my GKI is between 4 +/- 50%…

For what its worth, here is a screenshot from my thread. I asked for my BHB to be tested at the lab, along with insulin and glucose. I’m going to have another test tomorrow morning (fasting), and it will probably be Friday before I can get the results (if I call) or Saturday if I wait for them to post.

(haven’t seen a definitive list of what requires glucose, though).

One other type of cell without mitochondria are cancer cells. They need glucose to ferment for energy. There is also another source, which I cant find the name of, (hear about it on a podcast, but cant find it again). This other source of fuel is another fermentable fuel that cancer can use, and we cant live without. So starving cancer cells of glucose isnt quite a cure. But it definitely weakens cancer to the point where its very susceptible to treatment options. While the cancer cells cant use ketones, the surrounding tissue can, making the surrounding tissue stronger while weakening the cancer at the same time.

I will be going back Duke University for my RCC evaluation to discuss options at the end of the month. Ive been looking at my records, and to me it looks like the RCC has regressed by over 5mm. To me that means shrinking. But the docs have been very careful not to use that language.

I still Don’t understand this Now as I keep moving in this WOE and implementing IF Some days 18:6 some OMAD with exception of one day a week no window used My morning reading has come down from average of 125 to 133 Now is between 112 and 116

If I eat in the morning it comes down faster usually by noon, But iF I dont eat its stays over 100 till between 3 or 4 in the afternoon

Someone here said up to 130 is fine. LOL. Well, that depends.
I would be visibly upset if something drove my glucose above 120!

Normal, many decades ago, was 60-80 for fasting glucose. We are all carbed up.

So, first, forgive yourself, and LEARN a lesson. NEVER eat out unless you looked up the carb count.
BREAD is added to a lot of meat. Meatloaf is the obvious one. Then sugar cures are often added.

J. Alexanders marinades their Ribeye in brown sugar. I order mine W/O that and just Salted!

It could cost you 1-3 days as a general rule. Depending on how deep your ketosis was when you did it, and if you ate again after wards. Your liver loads up with glycogen, and it will have to burn that off to get you back into ketosis. Some LONG walks would be helpful the next day, before eating! (I know it was a long while ago)

@Vic0628 You may find the following of interest. Note: I have been keto since January 2017 and have no known metabolic problems.

None Of this No Bread, No Meatloaf, No Brown sugar on a ribeye,or anything else for that matter, I have been on this Keto since Jan 1st

In the beginning, I might have had some days at 25 carbs but even then far and few, Now Many days I am under 15,

I BBQ a lot 80/20 beef Maybe ounce of Cheddar, I buy block cheese and don’t use shredded, Chicken I get maybe 1 carb on dry rub, Occasionally ill do a hot dog

I count everything, I usually count each egg and slice of cheese 1 carb even though its less, I drink coffee black

Def not going over in carbs and I am losing weight

Also My ketones are usually over 1 sometimes I wake at .8 but not too long after its over 1, sometimes on an OMAD day it will reach 2 so not getting kicked out of ketosis

I don’t get spikes from food

If I do happen to eat breakfast as I do on occasion maybe on a Sunday, It will go down much faster

I am just trying to make sense of this and why this happens,

I usually get my blood checked by doctor every year except this year,. No one ever brought up diabetes or anything like that, However this does not seem normal to me but it also don’t seem in line with what I read about diabetes either

Curious, you are not the first person to mention that your glucose drops a lot when you eat.
This is (to me), a sign that your over producing insulin! It could take 6 months or more to straighten this out.

I would CERTAINLY do bloodwork, and include your insulin and your glucagon, as well as your C-Peptide.

I would consider eating something, and retesting your Insuiln and C-Peptide.

The point is that insulin drives your glucose lower… But usually turns off your ketone production.
Hence why I measure both with my Keto-Mojo (which I recommend).

For me, I also noticed that my stalls would happen, then with my same diet, my glucose in the AM would increase, and ketones go down for a few days, then WOOSH I would break my stalls. My guess is that this is a “liver plateau”, meaning my liver found some old glycogen it realized it could let go of.

Your body is complicated, and constantly trying to balance things out!
Let me know if you measure your ketones (via blood), and if you are tracking your GKI
(Glucose/18/Ketones)… 3 and lower is therapeutic, 3-6 is maintenance, above 6 is “loose”…

Curious where you are at…

this is typical If I eat only one meal it will end 1.6 or higher sometimes occasionally over 2

2.3 was my highest Never had numbers over 3 and I have had plenty of days under 10 carb’s

I am not having any stalls down 50 lbs since Jan 1st, Yes its ebbs and flow I might not lose in 1 week then 4 or 5 lbs the next, Without any changes

Vic,
It helps if you put the 2 numbers together (105 / 0.8)
And since you are not even 6 months into this, yeah, you have more healing to go.
Ketones > 0.5 PLUS higher glucose means your body is making GLUCOSE and KETONES so you are probably burning fat.

Don’t worry about it. Just track the 2 numbers for now, what you will find, is that your morning glucose will go lower when you have less excess fat (and your liver is no longer fatty).

Keep in mind, these numbers simply represent “Fuel Available in your blood stream”, or available energy! Your fat is POTENTIAL Energy, it has to be broken down to be turned into Glucose and Ketones.

Yep, your morning Highs will gradually get lower and lower until they get somewhere between 60-90. I want mine below 90s and sometimes I fail, usually seen by WHAT I eat, or eating too late.

But you are doing great. Keep at it! Hope some of this makes sense… And for the record, it takes your body YEARS to change. I was prepared from day one to have to wait 3 years to see my metabolism “fixed”. My coach told me… Losing weight is the easy part. Your body fixing it’s set point, and everything else takes time. And the more times you failed at dieting, the longer it takes!

For me, if it takes 6 years, it wont matter. I am eating pretty much this way for life. I enjoy being pain free and not obese, while being in control of my eating! LOL

This is a very difficult subject. As someone who has been low carb/keto going on my 7th year, I pretty much always have “high” blood sugar in the mornings by “typical” standards. That is, even 6+ years later, my blood sugar is about or over 100 every morning.

However, it goes up for a while, then goes down all day. (I don’t eat breakfast, and it still goes up.)

I’ve heard some doctors saying that they fast and their blood sugar goes up. I think they are mistaken. I think they are confusing what happens in a single day with what can happen over time. If I fast multiple days, my blood sugar ALWAYS goes down. It goes down every morning until it’s lowest (morning) on the morning of day 4.5, and usually the lowest at night of day 4.

Personally, I cannot tell. Way back when, I tried to get my morning blood sugar down. I tracked it religiously and took notes, trying to figure out what caused it to go higher or lower. High/low fat, high/low protein, you name it, I’ve tried it. After a long while, I gave up. If there is a trick to lowering your morning blood sugar (let’s ignore eating high carb for now), I haven’t figured it out.

But I don’t think for people who are low carb that the advice given T2 diabetics to always try to lower their morning blood sugar is relevant. There is nothing you can do to your body that does not have a range of effects. If I try to force my body to have a lower morning blood sugar, say by eating higher carb or drinking vinegar before bed (which does work in studies), does that give me a benefit? I don’t think it does.

So, I pretty much just ignore my blood sugar level, in the morning or otherwise. I just try to keep eating low carb. I have been testing higher carb my first meal after exercising, and this does seem to have some benefits. Like Kirk, I have had so many benefits from low carb/keto that I don’t plan on giving it up, whatever happens to my blood sugar.

And I wore a CGM for over a year. If I eat low carb, my blood sugar remains in a very narrow range. Check this out for instance: 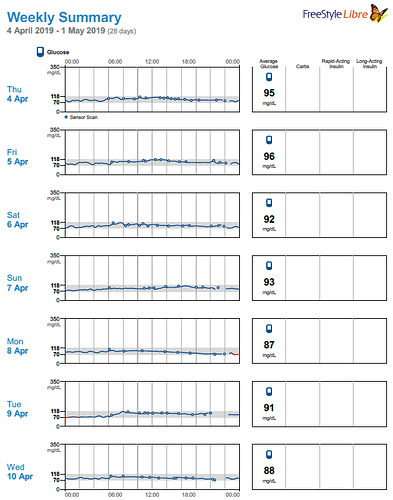 Or if you want a bigger version (this uses a European FreeStyle Libre; the above was from a US FreeStyle Libre). You can’t get much flatter than this. 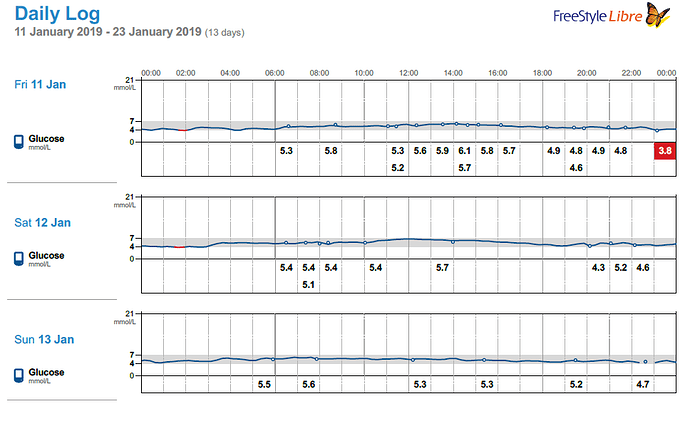 I am not as concerned about it, I find it strange

I figure I don’t have diabetes or out of control BS, But I do feel its good I am on this WO if I was headed in that direction

I think there is a good average. But the optimal blood sugar reading varies from person to person. Personally, mine below 70, my arm and face starts to tingle. And in the 40s, my bp, and heart rythm get messed up. Before Keto, I had a hard time keeping my blood sugar levels up. Was a year in April, I started Keto. Since things are much better. And 45# down.

I would do that. This is from Thanksgiving, 2017. The 9.7 is bread, potatoes, etc. The hump after that is from cheesecake (I seem to remember, anyway - notes are elsewhere). You can see each peak is only about one hour long for me. Of course, you might be different. 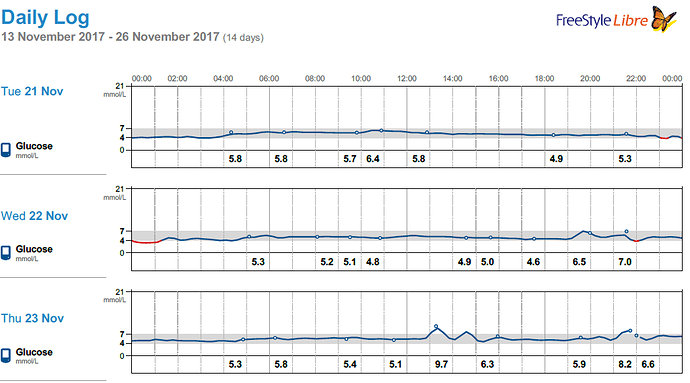