Really? I never buy milk when traveling to other states so my experience is only Texas and Arkansas.

Hiland is a local brand. Great Value is Walmart 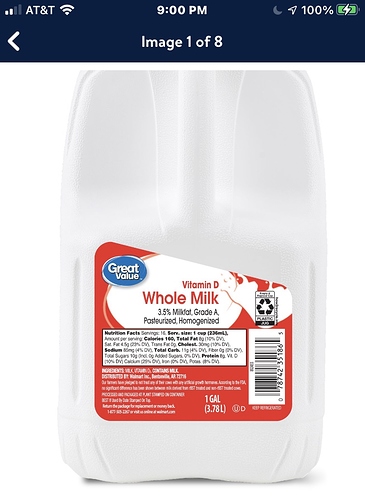 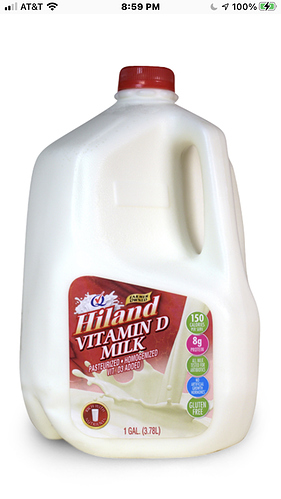 I suspect that the Northeast is probably more health-conscious, and that people (or at least retailers) think that ultra-pasteurised is safer, or something. Though that’s just a guess.

Could be. Us hicks in the south don’t need no ult-tree pastuerizing!!!

When I was a kid, we had simple pasteurized milk only in the shops.
Now we have only UHT milk with insane long shelf life.
I live in Hungary, maybe not everyone who read this know that yet.

I always preferred raw milk. Fortunately it’s easy to get some here. There is a farm with a truck visiting all the nearby villages.
Raw milk has a very different, way better taste. And it’s usually way fattier too if it’s just the milk as it comes from the cow.
In the supermarkets we have some super skim milk, 1.5%, 2.8% and 3.5-3.6% milk. Raw milk easily goes over that.
All raw milk places tell people to boil milk first, I simply ignored it all my life as it ruins the taste and I am the opposite of a hipochonder anyway. I am careful with certain things, I never would eat raw pork but raw milk?

Not like I really drink milk since a decade and it was very little before that too. As a kid, I drank a ton. Like 1 liter at lazy summer breakfasts…

The best milk I ever had was the warm, foamy stuff right out of a cow of my neighbor

The only thing I can’t get raw despite I would like that is cream, maybe I should buy milk, let it sit and use the top, I need very little cream anyway, it’s a big problem for now that the less overly pasteurized cream comes in 250ml bags, how can I use up that huge amount in a week without drinking coffee all the time? But even the very UHT boxes are 200ml. That is only okay for mixing it with lots of other stuff to mask the bad UHT flavor, ew.

The only thing I can’t get raw despite I would like that is cream, maybe I should buy milk, let it sit and use the top,

You can do that, as long as it’s not homogenised. My mother grew up on a dairy farm, and her father used to skim a little of the cream for his coffee. Unfortunately, homogenisation breaks the fat droplets up so much that they never separate after that.

P.S.—I am not all that fussy about food tastes, but I agree with you about the UHT milk. It’s sometimes useful to have some, but it doesn’t taste like real milk!

It DOES appear that UHT destroys 8% of the available proteins in milk:

Apparently the high temperature of the UHT process changes the shape of the milk protein, which is referred to as denatured, making it slightly less available. Protein appears unaffected during the pasteurization process because lower temperatures are used. The difference of protein availability is about eight percent. That is, UHT makes 92 percent of the protein available and pasteurization, 100 percent."

On top of this Vitamin C and B are really affected by higher temperatures.

Then there is the whole issue of protein degradation after time: https://pubmed.ncbi.nlm.nih.gov/31225661/

The raw milk I ever bought wasn’t homogenized, fortunately.

Check out the cream line! I forgot my glass jars but they had 2 plastic gallon jugs so they filled them for me. Their cow had just freshened (had a calf). I watched him stir it before he poured it up out of his 5-gal stainless milking jug but he obviously didn’t get it mixed very well.

Next time I am skimming some of it for coffee and maybe make some butter before using it for making cheese.

I guess it’s not easy to mix five gallons thoroughly.

That’s awesome! I’m always checking for the cream line when I buy milk. If I can see one, the milk will heavenly- especially the first 500ml mmm

Wow. What do you do with this? Take off the cream and have “skim” milk? Or just whip the stuff back together?

I mixed it back up and made some Colby cheese with it.

That was extreme - usually the cream line is around the top third - I don’t think the farmer got it mixed very well before he poured up my milk. I needed the whole gallon for my cheese recipe or I defintely would have skimmed some of it off for my coffee or make butter with it.

I’m a diagnosed lactose intolerant which I don’t agree with, but have zero issues with raw dairy, I have bloating and gas issues with any real amount of pasteurized stuff. Raw milk, cheese, ice cream all cause zero problems for me. I also noticed huge improvement in my skin when drinking it which I found after after the fact was a known thing, I have seborrheic dermatitis and when it’s not happy I have red marks on my face. It’s gotta be the bacteria.

So. I’m a whole-milk freak. It’s basically like heroin for me. Addictive and the more I drink the more I ‘need’. Prior to LC, I used to wake up at 2am and stumble to the fridge to drink from the carton and fall against the fridge gasping oh thank god!!! – seriously. A drug. Who knows why.

When I’m keto I don’t drink it. I think of it. It’s like in the background all the time, this low-level wanting. People tell me stopping cigarettes is like that.

I’m a super-taster for milk proteins. I can taste when milk in the past has reduced it’s temp – and tell when it’s lower vs higher reduction. Pretty sure if I had a job testing that by taste, with examples to learn from, I could do it. Sadly I hate the stuff-that-got-warmer (even if still chilly) so when I get milk it has to be the very BACK of the grocery shelf and right into a ‘cold bag’ and home to my super-cold fridge immediately. Sometimes this isn’t enough – it got warmer in transit somewhere – and I give it to my house helper because I find it gross.

Until I began making kefir. I can use the warmed stuff for that no problem. The kefir grains do not seem to mind.

But I digress, sorry. So… in my town there is a dairy-fastfood (!) chain called Braum’s, they are in the south. I first found them in Texas and was so delighted. I would go get a big milk every morning before work. When I moved here and they are just a mile down the road, oh! Their milk, their milkshakes, their eggnog-oh-my-god, just the bomb.

That was then… so after many years living here, spending more to buy my milk ONLY at the ‘dairy’ place not walmart or the smaller grocer, I started getting lactose intolerance symptoms every time I drank it. Now this was very sudden. Like the milk I had bought one week didn’t do it, and the new milk I had just bought did.

I was baffled. But this repeated every time I drank it! I bought a different gallon of milk thinking it was some inexplicable problem with that first one, something got ‘in’ it or something. Nope, still did it.

Now seriously baffled, I bought a half gallon of ice cream, this from the small grocer corner that is in their food place. Now those had likely been there for awhile, we’re a small town. No response whatever. Whew! I thought, the milk is… maybe I can’t drink milk anymore, but at least I can get ice cream!

But the next time I bought ice cream there, it had the same effect on me. Now I was thinking that literally I could not digest milk anymore, and was really upset.

One day I decided screw it, I want milk and haven’t had it in awhile, I’m just going to suffer the bathroom, like people do for chinese food lol. But it was late and Braum’s was closed, so I went to walmart which was 24/7 back then, and got some hiland brand milk.

And it did not bother me at all. WOW.

After that I tried Braum’s, hiland, and some cheaper brand the local small grocer also has. I tried regular and chocolate milk.

Braum’s gives me lactose-intolerance symptoms (or digestive symptoms I interpreted as that). None of the others do.

So what I’m getting to here is that apparently there are “processing” steps in dairy that are relatively opaque to us as consumers and are not something that show up on a label. And apparently at some point, something about Braum’s processing (or what they fed their cows or who knows what) changed. I’m guessing it doesn’t bother most other people, but clearly it does me.

I can’t taste any difference, despite my hyper-sensitivity to milk taste.

So maybe you are not really lactose intolerant. Maybe you just need to try a few different brands. I find it ironic that the cheapest nearly plain-wrap brand is fine with me and the best quality most pricey ‘dairy’ brand is not. Go figure.

When keto I don’t drink milk, generally, for carb reasons. When I’m not, or when I’m cycling, I have it then. I do drink kefir made from milk, sometimes when lowcarb (like <35 carbs/day) as I can only drink it with some stevia and fruit as a smoothie.

PS: I forgot to add: I still sometimes when not keto drink their milkshakes. And I get this rosacae (sp?) on my cheeks, like little red bumps or something. I use vitamin C serum to get rid of them. But if I stop drinking the stuff they go away.

PPS: I also forgot to add that after drinking homemade kefir regularly for some time, I was able to have the milkshakes again without problems except the skin issue – no bathroom issue. I don’t know if I could do their milk again, with regular kefir intake, or not. Not sure why but the kefir seemed to solve the issue at least with that.

Oh I did that as a kid

Now we almost never even buy milk and maybe the UHT flavor interferes anyway? IDK. But when I was a kid, there was no-UHT, easy-to-spoil milk. And I felt the passing time every day even though there was no sourness yet. Neat ability.

I drank my 1 liter milk for a luxurious late breakfast sometimes but it was no problem to go lactose-free later and we just don’t really drink milk since. I am into cream now. Whipping and sour alike. But the amount is tiny. I am impressed by myself.
(My lactose free years except very very rare exceptions did nothing, I still can handle a liter of milk at once, nevermind that my body subtly disagreed with way less lactose from other items sometimes. No D or anything just a tiny feeling it’s not ideal for me. I don’t get it but fine. My SO who did the lactose-free years with me lost his ability to handle well lots of lactose.)

So… Even the brand matters a lot. What. But it’s lactose, in all… Isn’t it? So the intolerance isn’t just about the lactose (or protein)?