Uh oh! I'm at high risk according to my health insurance!

How long was your protocol? Did you track everything you ate throughout?

I’m not sure if I caught it earlier – did you already do a test recently to compare this to?

Actually, his “baseline” numbers are likely higher TC/LDL and lower HDL given the protocol basically boosts these numbers relatively.

But therein is my problem with the entire point of taking these tests to begin with. I think they are far less reflective of actual risk for atherogenesis than believed, especially on a ketogenic diet.

As it happens, I’m taking a “standard” lipid profile along side every NMR I’m doing and will soon be able to have a breakout of how accurate it is in comparison. Should be some great new information.

Appreciate you sharing your research and expertise with everyone @DaveKeto. It is fascinating.

Will the lecturescfrom Breckinridge be available to hear?

They put it online eventually. But I don’t know all the details on that just yet.

Just completed my “Health Risk Assessment” for my health insurance too…HA…they are still pushing the SAD. Apparently I am at high risk too! If only they knew that I haven’t been this healthly (on Keto) for 30 years. (I guess that I am not eating enough fruit, vegetables, and whole grain) 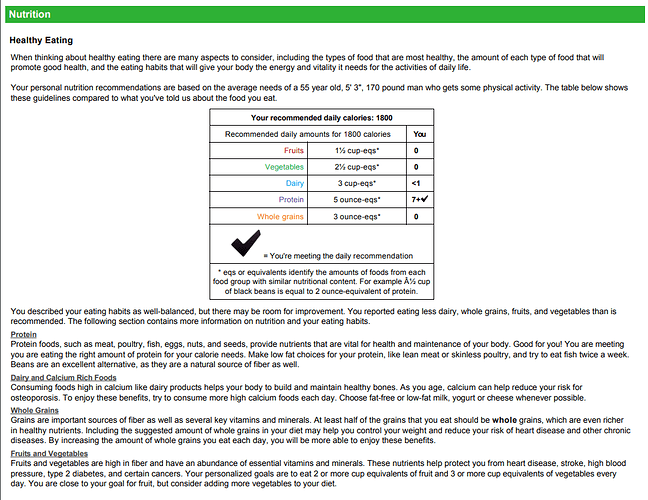 It is well-known among medical professionals that a ketogenic diet is unsustainable and will kill us.

Apparently, it kills us even after we have to stop eating that way, lol!

Just completed my “Health Risk Assessment” for my health insurance too

You tell the truth when completing those things?

Not really. Just enough to see what stupid recommendations they give me.

You tell the truth when completing those things?

NEVAH! I lied on just about every question because A) it’s none of their business and B) didn’t want it used against me in the future.

Haven’t done one since the last buyout 3 years ago (thankfully).

edited to add: I also filled out my husband’s because he would be too honest!

I’d like to censor anything, anywhere calling ACA anything but ACA. And I am not a fan of censorship.

They are seriously recommending 5 ounces of “protein” per 1,800 calories? I guess they add 3 “cups” of dairy (whatever that might be), but that is insanely low in the protein department.

Maybe if you went fat free greek yogurt, you’d get enough protein. 5 ounces of top round: 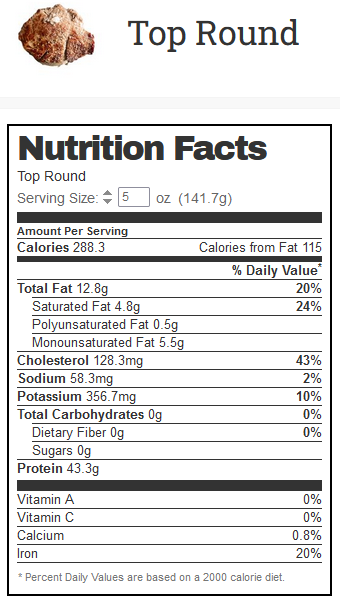 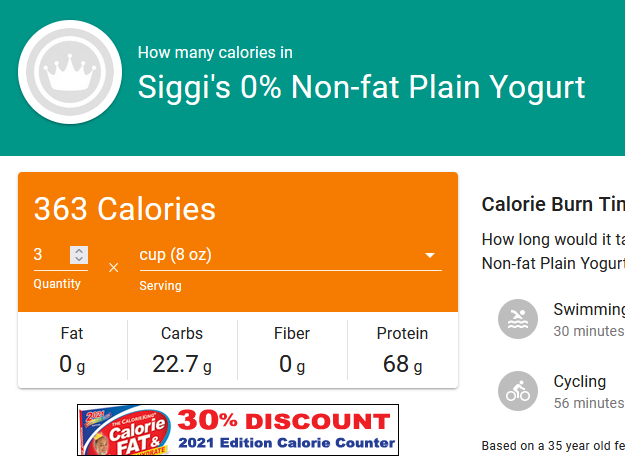 So, you could get about 110 g of protein for 1,800 calories, though eating 3 cups of Siggi’s every day would be a lot. Rather have 16 ounces of meat and less Siggi’s.

Oh my… I never could do anything with cups but in many cases, they are kind of accurate, it’s just silly to dirt a cup without a need…
But 3 cups of dairy? What dairy? Milk, 0 fat yogurt, quark, aged Guoda, mascarpone, butter?

How silly.
At least fruits get cups and not “portion” or “piece” (1 piece of what? raspberry, plum, apple, watermelon?)! Still have no idea how much is 1 cup grapes but it doesn’t matter, zero is zero

I am 45 though (and female) but I will be more muscular at 55… Of course calculators say low numbers but I always laugh at that. No way I could eat only 1800… That’s super little food! A cute meal for me. Nice, substantial enough if it’s extreme low-carb and has almost no added fat but definitely not a big one.

We don’t have such things here so I can enjoy these things through you, guys

It’s so weird that protein doesn’t mean protein… Or does it? 5 ounce(s? sorry, I still have problems with English) protein is 140g, it’s nice for me. But it’s high protein and usually way less is enough for someone with such a tiny energy need (though the two aren’t very closely correlated. still, somewhat they are). But 5 ounces of meat is close to nothing, that can’t be right either. And various protein rich food items have very different protein content… So the protein should be the protein itself, in grams… Many people don’t know that but I never could even vaguely guess the weight of my meat even after several years tracking (I didn’t eat meat most of the time but that doesn’t matter. I can’t guess anything else either. and protein is often mixed with other stuff. a big slice of cake is a mystery, it may be full with protein but it’s not sure… it’s usually more full with fat but not always… no idea how normal people decide about these things…).

Fruit protects us from diabetes? And the low-fat nonsense again… I couldn’t do low-fat if my life depended on it… That’s my room 101.

Fat-free milk… I can just drink water, way more healthy… I am brave and curious but I never brought myself to eat low-fat dairy (compared to the normal, fattier kind of the same type. as I eat the fattier quark and that’s very low-fat, only 7% fat. but it has its uses and I always add fat to it).

What is their problem with fat I wonder? It’s a normal, traditional thing to eat. Why sugar is better? Makes no sense. Oh well, it’s not like people in my country will start to eat low-fat any time soon!

But I still feel bad for some people.

By the way… My SO eats high-carb and very very much fruit, (healthy, for him) sweets are normal food for him. But even he doesn’t eat 2 cups of fruits every day… He needs to eat 3 big, fruity meal for that! 1 cup fruit easily makes an 1000 kcal meal… Not everyone can just sit down and eat fruit alone. (My body would answer with immediate sugar poisoning and I am a particularly sensitive one. My body just dislike having a ton of sugar, it doesn’t need it at all. Smart body.) He can squeeze that amount of fruit into his 2800 kcal but still not every day… (On some days he can eat way much, of course. In the past I couldn’t eat less than 3 kg fruits on my watermelon days and I ate 1kg apple just the way home from the university, every day for a while. But I could eat anything alone. I had some quality time with a tube of mustard sometimes

My SO is different. He can eat an apple or some melon but he eats most fruits with or in a cake or oatmeal. By the way, he would score some respectable amount from raisins alone…)

Fruits are natural candies. I still adore them but can’t look at them as keys for my health… And I personally couldn’t care less about fiber. And I would rather get them from some 0 net carbs source if I needed it…

They are seriously recommending 5 ounces of “protein” per 1,800 calories?

Five ounces of protein is twenty ounces of meat, right? That’s a lot, for most people

I think it’s “ounce-equivalents”. I’m not sure what that actually means though. 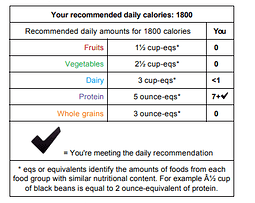 A half cup of black beans = 2 ounce-equivalent of protein? Baw ha ha ha!

(Speaking as someone who ate brown rice + beans to get a “complete” protein…for years.)

The Dietary Guidelines for Americans use the term “ounce equivalent” instead of the word “serving,” as in “eat at least three ounce-equivalents of whole grain every day.”

The Whole Grains Council (along with many other organizations) says “eat at least three 16-gram servings of whole grain every day” because “ounce-equivalents” may confuse some people.

They are both correct. A whole grain serving is EITHER

In other words, the term “ounce-equivalent” is so obtuse that only a government agency could have come up with it.

Yeah, that is completely nonsensical.

So, it really is a recommendation for 5 ounces of meat daily for 1,800 calories.

I guess you could eat 5 eggs for this.

Yikes! Thirty-five grams of protein a day is barely enough replacement protein for someone with a lean mass of 58 kg/128 lbs.

I guess you make it up through dairy?

Though I find it odd they’re allowing the category with the highest saturated fat content, dairy, to be that high. Dairy is one of the rare foods that’s >50% saturated fat, in terms of fat content.

(And I say this as a former Pritikin person who did eat that garbage; even I didn’t like it after a while. Though I can eat non-fat yogurt now, but only to test higher protein. Higher fat yogurt does taste better.)

Still, to get a reasonable amount of protein, you’d have to be very selective in what you eat.