If you think your metabolism has slowed down…

I gotta agree with @Janie seems your metabolism has slowed. Reading up through everything it pretty much seems close to what happened to me. Every time you stall you tweak something that seems to be removal of something else, involvement of fasting etc and temporary fixes that then lead to more stalls. I’d definitely start tracking again, and taking a look at what you’re eating, I’m sure you still remember enough from tracking before to probably be able to catch a slow down from that alone, but I wound up just going in and getting my RMR tested, it was pretty bad by the time I did it.

Frankly one hypothesis I have is that my metabolic rate has dropped as a result of eating low carb for so many years. No evidence to back it up though.

I used to smh at this one, as I’m sure you did at some point but there DOES seem to be some truth to this for some if us. I didn’t try to prove/disprove it directly, but after reading a bunch of other peoples results mainly on weight lifting forums that have gone LCHF and Keto they all said it happned to them after a while. These days I’m not doing strict keto anymore and have more carbs in there but definately still LCHF vs a “normal” SAD eater.

What fixed my 1700RMR was reverse dieting. I’d add 100 cals to my daily allowance every week until I started to gain, hold there until I didn’t, then keep moving up. If I gained 2 weeks in a row I’d drop 50 and go from there. I also slowly started adding carbs around workouts again. A lot of what I used to think was crazy about carbs helping metabolism seems to then be true for me, while before when I was heavier that stuff was a death sentence for me.

I’ve got ZERO science to back it up but my own theory is that our metabolisms are more like muscles than we think. We know CICO is far from perfect but I think there’s a real difference between eating 3000 cals, and burning back down to 2300, than just eating 2300 to begin with. I think all that work helps it get stronger. It seems my weight loss over time has been better when doing that. I think it also helps when we get a little stupid as far as mitigating the damage. Another thing I’ve gained with all this is a lot of metabolic flexibility. I’ve been averaging probably 150g carbs most days for months and last Saturday dropped the carbs back out until yesterday. Basically strict keto for 6 days while maintaining high protein, essentially a PSMF. No keto flu type stuff at all, just keep on running felt great, although a little bored with my menu since I kept the fat on the low-ish side. But my metabolism isn’t recognizable as the same one I had a couple years ago. We definitely change that way. If you have the ability, I’d definitely get your RMR checked, only takes like 20min.

Update: I may have cracked it. More details to come in a couple of weeks when I know more. 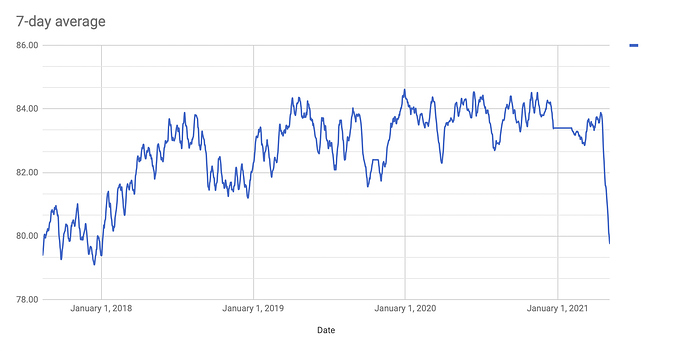 Just read your whole thread Gabe and now I’m left hanging!
Happy to hear that you’ve worked something out though

If you have the ability, I’d definitely get your RMR checked, only takes like 20min.

Where do you get this checked? And what would having one “number” do for you?

For instance, I’ve gotten one testosterone test and one c-peptide test. Both were in the “normal” range. I have yet to figure out what to do with this information.

Read this for instance:

Sterculia Oil: Metabolic Results Number One - Fire In A Bottle

I was able to use Sterculia Oil and stearic acid macro-dosing to increase my metabolic rate.

He has a $7,500 metabolic tester. He takes the test a few times daily, and each day, the results vary wildly. The lowest “resting” rate is 272 and the highest is 416. Now, he’s trying to show that his oil improves this, and also his “feasting” raises this, but still, there’s a huge variability.

Where do you get this checked? And what would having one “number” do for you?

You can either have your Doc order it, put that’s kinda a PITA since they want to know “why” or just go to a place that has the equipment. My first one I had done at a place that trains cyclists, the second one I had done at a high end gym where the training department had them for measuring Vo2Max. What it does for you it tells you almost exactly what your metabolic rate is so you can work macros according, or just know that you’ve either sped up, or slowed your metabolism. In my case I was originally eating WAY more than my metabolic rate would allow and not loosing fat no matter what I did, or so I though. After my original test I had to drop my cals by almost 1000 just to get the needle moving again which worked almost immediately.

For instance, I’ve gotten one testosterone test and one c-peptide test. Both were in the “normal” range. I have yet to figure out what to do with this information.

As somebody that’s been on testosterone for years, being in normal range means nothing, as the range is constantly being lowered and doesn’t really mean much. From being all across the map on that one I don’t like coming down under 1000ng/dl. I have a good doc that likes me in the 900-1100 range which works out perfect, but much under that and I’m not right. When you see those Low T commercials telling you how you’ll feel 20 again, have tons of energy, be in a great mood, all that… There’s actually a lot of truth there, but you gotta get those numbers up to get that out of it.

Update: How I broke my 3.5 year stall