Looking for ways to get tinned fish into my routine?

I typically do OMAD Keto, but have being trying to do this while reducing my budget, while still eating good quality beef & lamb…

Tinned mackerel/sardines I like, but trying to have them in a meal at the moment is just having them plain on the side…

Welcome! Tunafish mixed with mayonnaise (and spices to taste) on lettuce makes a nice salad, so I don’t see why salmon and mackerel wouldn’t also work the same way. Take a look through our Recipes forum or do a forum search on the type of fish, and you might find some other ideas.

I only use tuna (a few times a year, I am not into fish very much), in deviled eggs

That’s very nice. Tuna is almost no calories (and I can’t really do much with low-fat dishes) so I need something more substantial (and fattier) with it anyway.

I often used to make a layered casserole thing with tinned mackerel on the bottom and cheese on top. I can’t remember what else exactly. Tomato sauce and Italian spices I think. You could experiment and come up with something!

Another thing I used to make is Chilli Mackerel, which is a quick and simple curry. I modified the recipe in various ways, and it was always great. (Methi is fenugreek, which I don’t use.)

Just in case the link doesn’t work, here is a very simplified version:

(Or, make it even simpler by using peri-peri sauce instead of onion and pepper.) 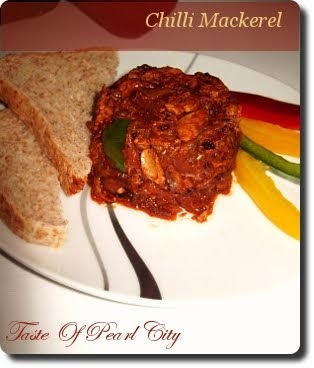 This dish is made by husband, this is one of his batchelor's dish. I really enjoy this a lot with both rice or bread. Easy to make, yet tast...

No shortage of Tuna in Olive Oil, all I’ve ever bought.

If only! In my area, it’s all packed in soy bean oil.

Since I can’t tell whether “olive oil” is really that, and because I like the taste of fish in water better, I’ve been eating more fish in water. A lot from Wild Planet. They have some at Costco (Albacore tuna), but most I have to order online. Costco also has Pink Salmon in water. (From Trident Seafoods.) The sardines are higher in Omega 3, though.

I think tuna with mayo is good, though I’d add something crunchy and spicier (eg, red onions, celery, etc.). I’ve always called this “tuna salad”, and I like it. Hmm…maybe I’ll have to make some next week? Just have to watch the mayo or make it yourself.

Yeah, the mayo in my area all seems to be made with soybean oil. I’ve tried some of the homemade recipes on these forums and liked them. I just need to find a few recipes that will use up the egg whites! (Can’t bear to let them go to waste.

Avocado oil based Mayo is great!

I was on the Pritikin diet (super low fat) so long, that I never used mayo. So, I didn’t have any preconceptions as to what mayo is “supposed to taste like” when I started making it myself.

I usually use a whole egg, though if you have egg whites, Maria Emmerich has a bunch of new recipes using those. Her “bread” and “pizza dough” are both based off of egg whites. The bread can be great, for instance as French toast. The pizza dough needs a bit of “help” in my opinion (eg, Parmesan cheese, onion/garlic salt/powder, etc.).

So, I didn’t have any preconceptions as to what mayo is “supposed to taste like” when I started making it myself.

I ate mayo maybe a few times in my first decades

Though I liked when I made it with lard (I dislike olive oil and lard is way cheaper anyway) and the yolk overpowered it (10g lard for one yolk, I think)… I still never made it again but I have to avoid added fat, I overeat fat without its “help”. And even my mayo was just too fatty.

The bread sounds… Interesting and probably not very good for me, dry and tasteless to my liking but such things can helped (I clearly would add yolks, all my bread must have them but I am a maniac if it’s about yolks :D)… But it looks good and fluffy and well, if it’s just a base so I can add much more fat later… I would try it out but I don’t ever buy egg white protein as I am very choosy about the source of my eggs… Maybe I could replace it with something… I have some other protein powder I can’t do much with…

I always make cheesy egg white thingies in my muffin mold when I have many eggs (whipped egg whites, tiny salt, some grated cheese. barely anything but the original recipe had a lot). My SO loves it even after eating it almost every week since years but he is a weirdo. It’s boring to me. But edible when one is hungry and some sausage makes it WAY better

My marshmallow uses egg whites too but well, it’s candy (and not really marshmallow, I obviously put yolks in it as it’s very tasteless without it, no matter the flavorings. I can’t really eat no-fat stuff either). It helps that I almost never ate marshmallow in my life (only fruits could get away with being not fatty)… It’s quite nice when making right, I got the recipe from the Internet, many keto marshmallow recipes use egg whites.

Hungry me can just fry and eat them too but it’s not the best. Nice but well, I prefer my scrambled eggs having more yolks and whites if possible, not less. It’s the same for sponge cakes, angelcake is plain bad to me. (My sponge cakes are 100% eggs.)

But normal mayo (doesn’t matter if keto, I mean one yolk for a ton of fat) has so little yolks. One egg white is easy to use up!
I would love to figure out how to make an egg white into the same wonderfulness that is boiled egg white. Boiled eggs are special, I almost always eat them with twice as much egg whites as yolks (and it makes the problem of leftover dry yolks but I have many ideas for it, first of all, deviled eggs fillings, they don’t need to put into egg whites). But only boiled eggs have that wonderful whites. Maybe poaching the whites in some nice broth are nice too?

Sometimes I combine my two “leftover problems” and use egg whites with boiled egg yolks. I made recipes like that. Especially useful for my carnivore baked things where the egg yolk is used as dry stuff. I don’t have any clearly good one though.

The bread is…interesting. If you want to make French toast (take a slice of the bread, fry in eggs and butter, and make a fake, sweet sauce/powdered “sugar”), it’s quite good.

My wife made this once as French toast, and we put powdered fake sugar on it. It was really good, though I never ate French toast (eggs = fat, can’t eat that on Pritikin) for a long time.

I do know the pizza dough is a bit dry unless you make it thin and modify it.

I do make the pizza dough, as it’s easy to make. There, the problem is that you use all whites, and have a ton of extra yolks. I just make an omelette with them.

By contrast, I’m not sure I could make an all-white omelette. Brings back bad memories of low fat.

French toast isn’t a thing here, we eat very very eggy fried salty bread here. But I never missed that in the last decade… Whenever I eat any kind of bread, it’s savory nowadays.
If I want sweet stuff, I usually make pancakes.

Pizza isn’t a bad idea! Even if I won’t call it pizza. Even my bread dough pizza isn’t anything like Real Pizza, I am very choosy about that. BUT my not-pizzas are still nice enough. As long as the dough is very thin and a bit crunchy (the lower-carb and eggier I make them, the harder to reach that), I can accept and enjoy it.
For some reason, I like to make bread and pizza and sometimes I want to eat some of it too…

I will experiment next time I will have lots of egg whites. I only have a few now and I make carnivore cheesy biscuits with them.

Indeed, omelettes need yolks. The more the better, I think

Fat can be added without yolks (cheese, lots of added fat if that works for the one in question) but the taste probably would be lacking (if one is like me). But pancakes can handle a bit more whites, I tried it once in need

Sometimes I run out of eggs but have leftover egg whites… And I can’t function without eggs so I use up all the whites.