A plate of coldwater prawns with sliced cucumber.

A bowl of mushed strawberries, pumpkin seeds and almonds.

As you can see all my snacks are very simple and minimally processed. What are your favourite keto-friendly snacks?

I don’t know what we call snacks, I just have dishes I guess but some are more snack-like and smaller. My sponge cake (only eggs but the fluffiness is lovely!) with some nice half-hard cheese and some nice condiment is like that

Some fish (tinned or not) might be considered a snack too.

Or a spoonful of sour cream or some other nice creamy dairy. I often mix quark and sour cream and add vanilla and a few drops of lemon juice - or dill and salt.

I used to have chocolate covered frozen banana and sour cherry on keto, that was nice and very few carbs due to the amount… And it satisfied some part of me that almost felt deprived due to my too low veggie intake… I always loved and will love fruits anyway. Raspberries are lower-carb but sweeter ones was better with my chocolate. Especially the unsweetened kind.

And I have a dessert originated in a marshmallow recipe. It is based on whipped egg white but I obviously added a yolk as I do it with everything and today I added mascarpone too - to get away with the lack of sweeteners :). Mascarpone is magical and does that to me even though it isn’t sweet itself. Sweetish, sure but it’s minimal. It has vanilla and anise and becomes some jellied fluff and I love that texture! Indeed, it’s edible without sweeteners but one probably needs to get used to it a bit. I will experiment with savory ones in the future. I won’t give up my jelly fluff just because I plan to have some long mostly carnivore time…

Chocolate covered frozen banana and sour cherry, that does sound good. Me, I just like to keep it really simple. But if I was a better cook and more adventurous I’d probably attempt a sponge cake. I did attempt to make almond pancakes, but they were rubbish lol.

I also tend to snack on meat, and I love pork chops. Because I gave up dairy cream and yogurt are out for me, as well as cheese, which used to be my favourite go to snack. But there’s so much delicious food in the world. I don’t think there’s anything wrong with a snack or two in addition to to or three regular meals. At least not at the moment I do, though it might change later. Life is constant change after all.

I do keep it simple. Yes, my sponge cakes are among my less simple carnivore dishes (definitely less simple than boiling on egg or toss some meat with some salt into the oven or into a pot of water) but they are super easy. One ingredient (sometimes two when I add a dash of salt), some mixing. A few minutes of easy and even enjoyable work, I LOVE seeing those fluffy mounds

What was the problem with the pancakes? Oh you wanted those American style thick ones? I can’t do those (probably could if I wanted but we have crepes-like ones here), I make Hungarian carnivore pancakes, eggs and sour cream or mascarpone. Mostly eggs. Not everyone likes my pancakes but I dislike floury ones so each to their own.
My SO gets like 10g flour per 1-2 eggs in his very occasional pancakes. Probably 2 eggs, it’s still so much flour!

It’s the flouriest one I am able to make. But he likes them. He just doesn’t like them with ZERO flour, it’s too scrambled eggs to him (but no, it has dairy… 10g sour cream or 5g mascarpone per egg! it’s perfect and nothing like just eggs).
He never even tried my beloved sponge cake muffins while I eat at least 3 dozens of them per week. But he doesn’t even like proper sponge cakes. Who doesn’t like sponge cakes? They are the best, most eggy cakes… Okay, not everyone is an egg maniac, I get it…

Oh indeed, drinks! Coffee with cream and egg yolk, with lots of whipped cream on top with a hint of cocoa if I was something really luxurious

But a simple creamy coffee is a nice dessert too.
And I like a nice (unsweetened, I am evolved to that level, amazing) cocoa drink too but that’s even less carnivore. But sometimes I care more about quitting coffee

I don’t think there’s anything wrong with a snack or two in addition to to or three regular meals.

Oh we are similar

I always read snacks are evil and we shouldn’t, okay maybe I exaggerated a tiny bit but not more…
I am not good with tiny meals, usually - but if snacks work for someone, why not? I understand raising our insulin and blood sugar too often may not be so good - but I still don’t see the problem especially when it’s not a whim but kind of a need…?
But I really prefer to have ONE meal. Calorie containing snacks are meals just the same to me. It’s eating. Except maybe if it’s very tiny, sometimes? I am flexible.

Oh yep there is a walking snack, rosehip. The season started some time ago and there are zillion rosehip bushes here. Not my fav snack but I eat several rosehips per winter

It’s during a walk and it’s only a few grams and it’s very occasional too so I definitely don’t worry about the sugar. (But it’s not carnivore so I try to behave in my more determined times.)

Snacking is discouraged only because it raises insulin, and the goal is to lower insulin, not raise it. But those times when I want a snack, I try to make it something healthy, such as pork rinds, pepperoni, or buttered cheese.

Greek yogurt in a bit of sucralose

A cube of Brie

I’ve always wanted to try pork rinds. Growing up I was mad on pork crackling. But so far I’ve only found this type of snack in shops with unsavory ingredients like dextrose. Do you make the rinds yourself?

As to snacking spiking insulin, wouldn’t time-restricted eating (IF) allow the insulin to fall again and stay down? I usually have a snack early in the day between breakfast and lunch such as a tbsp of pumpkin seeds, 5 or 10 almonds and 2-3 small strawberries to give an example, then dinner (meat or fish with a few vegetables). My eating window usually ends 17:00pm. So even if we spike insulin momentarily with a healthy snack earlier in the day it should have time and opportunity to drop again.

What Dr Fung advises against, as I understand it, is snacking throughout the day from early morning till late at night because this constant eating (which we never used to do), will never allow insulin to be lowered, which is why he recommends time restricted eating. But he also advices newbies to ease into IF and to switch it up a bit for the body. So when I am in need of more energy I do 16:8 and when I require less I do 20:4, but I never just keep to only one thing. Like OMAD. As far as I’m concerned I must be keeping insulin low because high insulin causes water retention whereas keto does the opposite, and I have got rid of all my water retention.

I’ve always wanted to try pork rinds. Growing up I was mad on pork crackling. But so far I’ve only found this type of snack in shops with unsavory ingredients like dextrose. Do you make the rinds yourself?

No, there’s a brand in our region that is sugar-free.

So even if we spike insulin momentarily with a healthy snack earlier in the day it should have time and opportunity to drop again.

How quickly our insulin will fall depends on how insulin-resistant we are. If you are sure you can manage it, there’s no reason not to snack. It’s just that the advice not to snack is predicated on the idea of keeping insulin as low as possible for as much of the day as possible, so as to get the maximum amount of fatty-acid metabolism.

If you are insulin-sensitive and you insulin drops easily, snacking is much less of a concern. And if your snacks are carb-free, you probably won’t be raising insulin all that much, either. But if the reason for the snack is actual hunger, then eating more at meals still makes sense, and if it’s not because of hunger, that’s a whole separate matter.

What is your sponge cake recipe. I forgot all about palachinkin that I made a few months ago until your post reminded me

Whipped egg whites mixed with whipped egg yolks (usually the same number of both), the result is baked until it gets a nice color. That’s it. Sometimes I add salt too.
Not a proper sponge cake due to the complete lack of flour, it deflates but it’s still so nice

I often eat it with some spread, sausage, butter, sour cream or fatty meat. I use a muffin mold and just grab some pieces when I need them. They are my buns, great for sandwiches

@never2late I think Old Dutch Bac’n Puffs is a Canadian brand, but if you look around you should be able to find pork rinds with just basic ingredients. You could also try looking for chicharrones (the Spanish name). 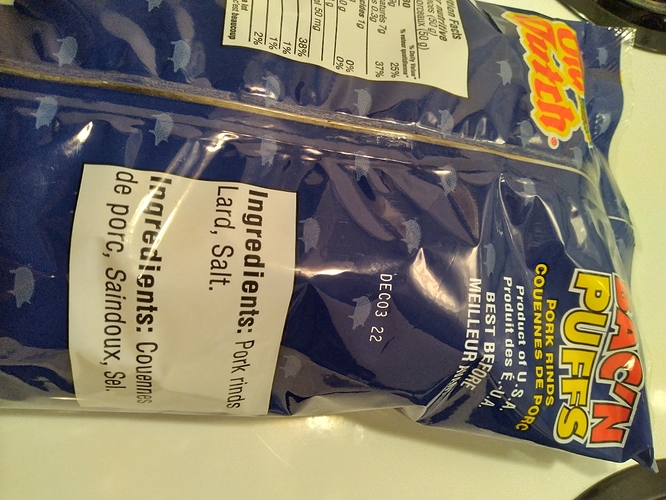 Thank you I will try to make the sponge cake and see what I get. I bet this could also be cooked in the microwave as a muffin cup or in a flat bowl

I don’t think so. “Doughs” containing whipped egg whites never worked well for me there… They are kind of sensitive.