Jennifer - yeah, we’ll see. The Georgia DPH has become somewhat of a joke due to obviously intentionally misleading things, but that’s where most of the data still comes from. 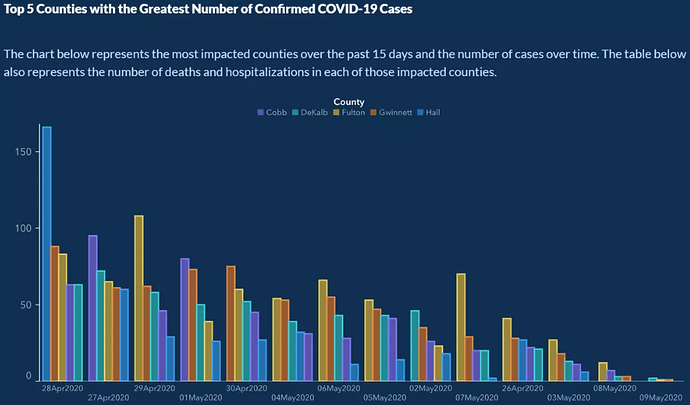 There’s one example - it’s not all that easy to see, but check out the dates.

It’s gotten to the point that state legislators and scientists are asking, in effect, “What are you idiots doing?” One or two mistakes would be one thing, but there’s a large pattern of trying to be misleading.

The “cases over time” graphs, with the last 14 days being incomplete, make the more-recent numbers look like they’re always falling off a cliff. The DPH changed to this way of presenting the numbers in April, right before the announcement was made that some restrictions would be lifted. Many an eye was rolled.

That period from May 11 to May 19 - it does look like something is going on, and you may be right about a new uptrend. Georgia data is pretty dodgy, in my opinion, anyway - there are 159 counties in the state, with the largest 4 having ~3.5 million people. Then there are also 33 with <10,000 each. Some of these county ‘health departments’ are just one nurse manager, with reporting, hospitals, medical examiners, coroners, etc., being in other counties and accessed through larger ‘public health districts’ - there are 18 in the state. I don’t know if there is deliberate under-counting of deaths or cases, other than the DPH including antibody tests in the total tests number but not including positive antibody tests in the total positive tests number (which is yet another unbelievably stupid thing).

In the beginning of the virus outbreak, data on deaths and testing was very delayed from some areas. At the end of the year I’d like to see total death numbers for the entire state, to see how it compares to normal, expected morality.

At the end of the year I’d like to see total death numbers for the entire state, to see how it compares to normal, expected morality.

Me, too. Total deaths from all causes should be straight forward to count since a death certificate is required. And regardless of whether or not the cause of death is classified correctly or not, the year-on-year comparisons should be interesting.

Taking current numbers the deaths from COVID would be statistically insignificant. I know we have a long way to go but we have 32,000 deaths annually and are sitting at 116 deaths from COVID, 42 in nursing homes. Being admitted to a nursing home is usually a one-way ticket with a high mortality rate anyway. I lived down the street from one in Houston and the ambulance was there almost daily.

Me too! It’s going to be interesting to untangle effects of the lockdown from coronavirus deaths. Like, I thought for sure auto deaths would be way down, with so fewer miles being driven. (From April 1st)

But, maybe people are compensating for decreased traffic by being morons? (From May 20) 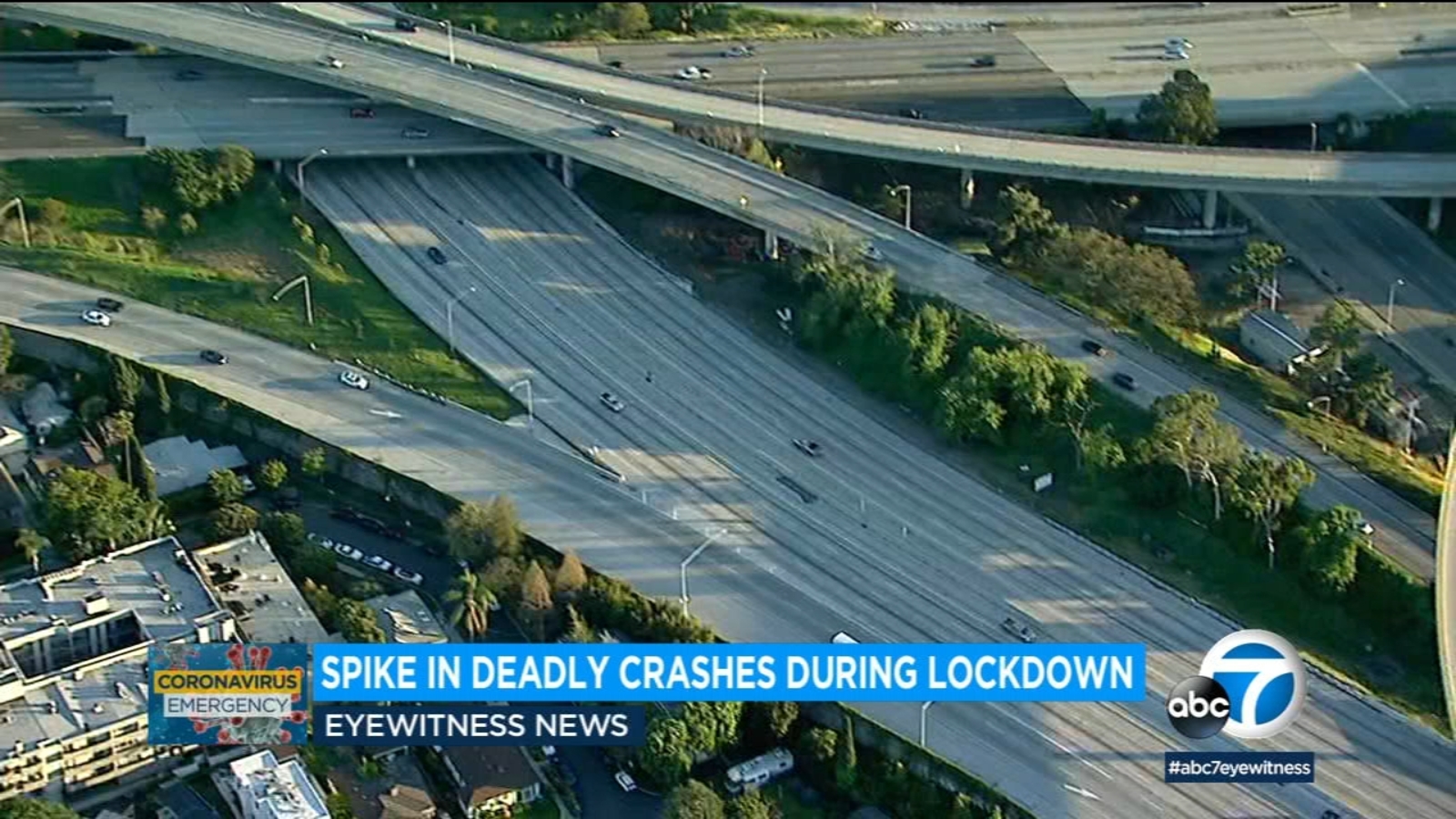 While the novel coronavirus pandemic has led to people staying at home and driving less, new data finds that emptier roads may actually be more dangerous.

Look I wasn’t the one that started an argument with you, You are the one that made it a personal attack you are intolerant of views other then your own, I have only responded to your attacks

Argument was never my intention, And I am pulling myself out before you drag me further into this argument that is a complete waste of time 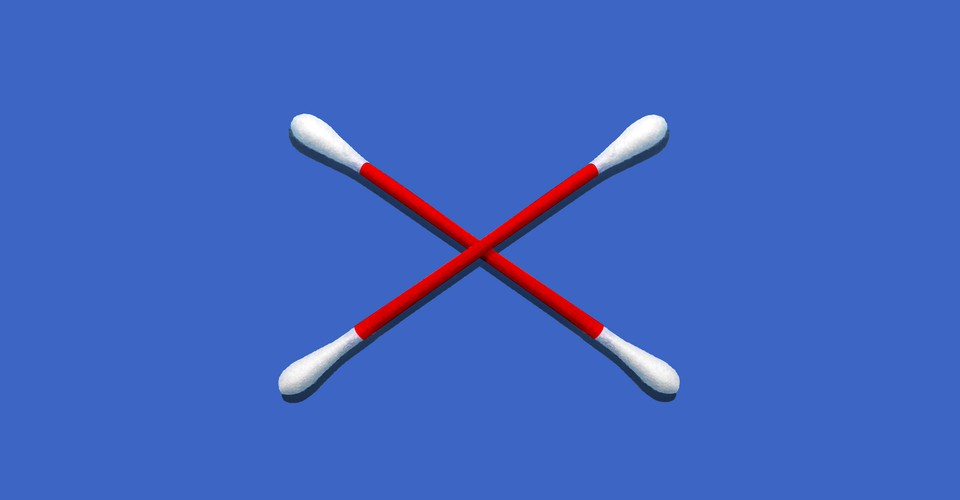 ‘How Could the CDC Make That Mistake?’

The government’s disease-fighting agency is conflating viral and antibody tests, compromising a few crucial metrics that governors depend on to reopen their economies. Pennsylvania, Georgia, Texas, and other states are doing the same.

I check the John Hopkins link on my laptop, I think it would be rough for many phones…

We just went to Wisconsin for Memorial day. We live just below the border, in fact my husband works there. It was so nice to be able to go to a park, walk around and to eat in a family restraunt n when we had a bit of rain. My granddaughter who is 3 and grandson 1, were able to play at the park.
We are looking for a home in Wisconsin and since this whole draconian lock down I’ve been more diligent in my search. My only fear is selling my present home which is paid for, but we gotta get out of this place. It’s driving us nuts! And we’re both working. Plus traxes here are much higher on homes ect. We even buy our gas in Wisconsin and save so much because of the gas tax. Even the license fees are cheaper in Wisconsin.

Fox is absolutely equally as bad. But if your personal bias leans that way, I can see why you would think that. NBC and Fox both have a HUGE agenda they’re pushing.

Fox will push opinion but still keep the facts the facts not change them, They might omit which is bad and why I dont trust them but the other lie and omit much much more often which is why they are worse

sorry peter if you got that impression. I was only trying to state what I am observing. I will be the first to tell you that I dont know what the right thing to do is but I am pretty sure its not just whatever the opposite party wants. Both sides are guilty of playing that game so no im am not just saying dems are bad. There is bad on both sides of the isle. That is why I try to observe from the center. Again I apologize if I didnt articulate what I was trying to say very well

So, many states are partially opened up and some moving to the next phases (50% restaurant occupancy for example) and predictions of a “spike” were wrong. The overall trend of cases and deaths is trending down from the first of May when the re-openings began 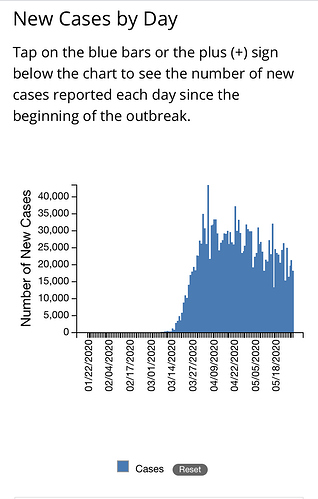 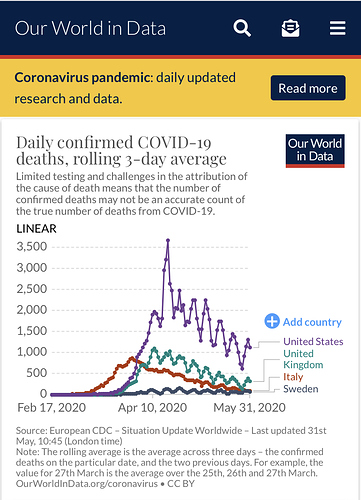 Some states where it’s still increasing 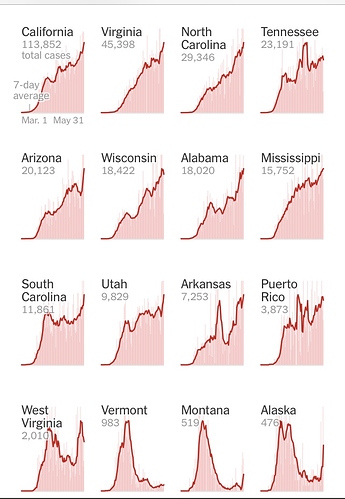 Some where it’s decreasing 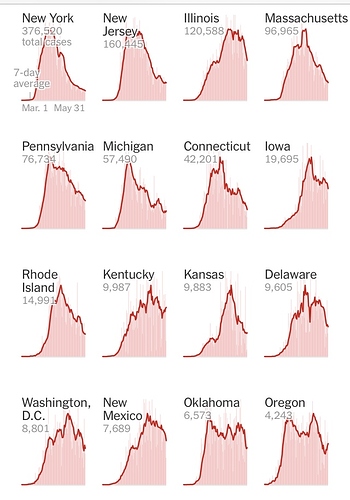 Some where it’s about the same 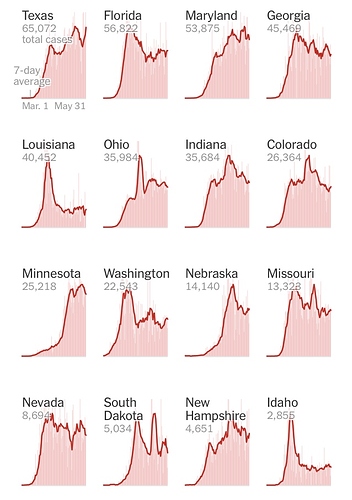 At least according to the NY times.

Yeah, our cases are increasing here which is why the governor hasn’t moved to Phase 2 of his re-opening plan. Testing has increased a lot so that may account for some of the increased cases.

Death rates lower now than when we started the phased re-opening except for a spike a few days ago. Total deaths for Arkansas is 133.

We will be driving to Austin, TX on Friday and staying 3 nights in a hotel. I can’t wait. We will have a kitchenette in case we have trouble getting into a restaurant. They are at 50% occupancy but we won’t know until we get there how many are still staying home and how long the wait for a table will be.

My glasses broke yesterday and I am due for a new pair anyway so I called and made an appointment with a local optometrist Found out today was their first day open to non-emergencies.

I called when I got there and they said come into the foyer but don’t enter the waiting room. I did and they took my temperature, asked me their COVID questions and then said I could wait in the car… ummm… my husband dropped me off to go do some shopping since he couldn’t come in to help me pick out frames.

She offered the wheelchair to sit in that was in the corner of the foyer. I shook my head and said I would stand. I really didn’t mind - I sit all day at my computer working from home so it felt good to stand.

I guess they felt bad after a while and asked me to come in and sit down. I was the only one in the waiting room. They were all going to be interacting with me at much closer distances than sitting in the waiting room and we all had masks on. Just silly.

When I was trying on frames I asked the woman how could I tell how they looked on my face with a mask on? My glasses cost over $600 and I have a professional career and have to look good. I was the only one there picking out frames and she could stand 10 feet from me if she wanted to.

She super-glued my earpiece on and stood far enough away from me so I could pull my mask down to try on frames. I appreciated it!

Some states where it’s still increasing

Take out New York and the rest of the U.S. is a different story. Take out NY and NJ and it’s more pronounced. Take out CT and MA and blah blah blah. Still very early in the first wave, most places in the U.S.

Breathing is all it takes to spread the virus. My asymptomatic brother has the same callous attitude while he was increasing my viral load. I had to avoid him like the plague.