OMG I am ploughing through new messages not missing anything

It used to take me several hours every day on FaceBook to read new messages in the forum … just to make sure that I was apprised of what was going on in a forum in our name. Actually I gave up getting to every message back around 3,000 users. I’d almost burned out.

NOW it takes me a few minutes.

I have one of those gamer keyboards (sorry bout the smudges, and dirt - totally didn’t think about how that pic would look) with programmable keys. 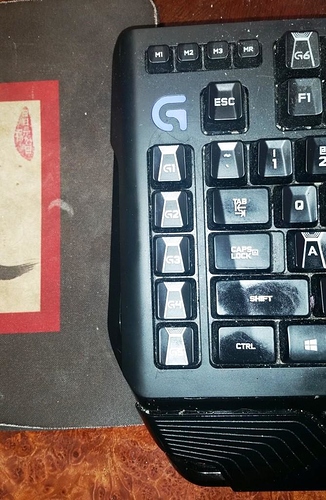 I set up my G5 key to the sequence of characters “guj” which [G]oes to the list of [U]pdated posts, and selects the [J] next one.

I set up my G4 key to the sequence of characters “gnj” which [G]oes to the list of [N]ew posts, and selects the [J] next one.

These only work on a PC and you can find the other short cuts with the [?] key when not in an editor.

NOW it takes me a few minutes.

I’m thinking of getting a BT keyboard for my phone. Do they make one with programmable keys?

I had a look and couldn’t find any

Not usually. They do have solar BT keyboards that cost a bit more, however they never need batteries. I love my teeny one.

You can get an otg(over the ground) usb adapter for a phone, and then plug in any usb keyboard into that, even a wireless computer keyboard that wouldn’t normally work on a phone. Slightly clunky though. If you can code it on your phone, you can use anything, even these programmable ones.

Thanks! I just ordered one and I’ll see if it works with the keyboard I have. I am SO tired of typing on my phone.

This is so cool. I’ve never been in a forum before, there’s so much to look at