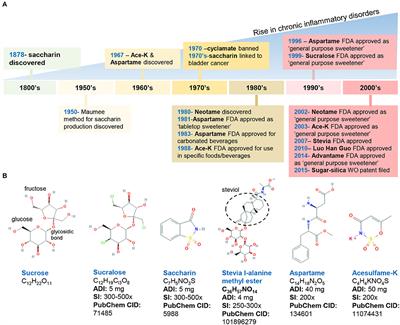 Since the introduction of artificial sweeteners (AS) to the North American market in the 1950s, a growing number of epidemiological and animal studies have suggested that AS may induce changes in gut bacteria and gut wall immune reactivity, which...

Interesting, but I’m not sure that our fixation on intestinal bacteria will prove worthwhile over time. I also wonder whether the β-hydroxybutyrate from a ketogenic diet might not help preserve the immune reactivity of the intestines at the proper level. I doubt there were any ketonians in the studies mentioned. Nevertheless, it is an interesting article, and I look forward to reading it in full.

I think “gut wall immune reactivity” as they put it, is one of the most important things in the health of our culture today.

Gut wall integrity is suffering horribly in our culture. Inflammation caused by this, albeit the thing that underlies nearly all disease, is really just a small part of the problem. I meet countless people who are a walking ball of medical symptoms I recognize as likely sourcing from things like being intolerant to grain proteins, but that’s a big $ source so will be repressed in the medical world for attention as long as possible. But people only react to foods (aside from allergies) due to poor gut integrity.

I think this issue is gigantic. I think a huge portion of our society is sick as hell and it starts with overcarbing and seed oils but between the effects of poor foods and antibiotics and so on, by late 30s at the latest for most – in childhood for some – I suspect a gigantic % of our culture has serious gut integrity problems.

Every tiny different place in the gut differs though: maybe that is for absorbing vitamin A, or maybe Selenium, that they aren’t getting much of anymore. Autoimmune diseases are rising in the population to the extreme, which is likely sourced from the effects of leaky gut as well.

Everything causes effects on the gut biome, so studying what those are is merely basic interest. But not everything affects the integrity of the gut wall. THAT part is crisis-level important, because the downstream effects are almost infinite… and almost never medically diagnosed.

And modern wheat, and antibiotics, and all kinds of things that are very common in our society may all be contributors or causes of that problem.

Well most (not all) people ‘go keto’ because they are not healthy – they are fat in most cases, though there are other reasons. Non-nutritive sweeteners are pretty commonly used, and more in the lowcarb world than the (sic) ‘keto’ world since there’s a slightly larger carb allowance there for sweets. So if some of these (doubtful all) do actual damage to the intestinal wall, that’s pretty critical for the ketogenic world to be informed about.

If sucralose is damaging but stevia and monkfruit aren’t, for example, that’s pretty important to know, because a ton of “sugarfree” stuff is made with sucralose. This reminds me of people who eat the keto bread and wraps that are the super high-gluten frankenwheat products. It would just seem injust to me that someone would go to all the trouble to pursue a lifestyle to make them healthier, and be completely unaware that they are damaging themselves in some deeper way than merely needing to lose 30 pounds.

I think this issue is gigantic. I think a huge portion of our society is sick as hell and it starts with overcarbing and seed oils but between the effects of poor foods and antibiotics and so on, by late 30s at the latest for most – in childhood for some – I suspect a gigantic % of our culture has serious gut integrity problems.

Fortunately, a ketogenic diet has been shown to help with most of these problems, most likely the effect of β-hydroxybutyrate, which is the principal ketone body produced by the liver. Dr. Phinney cites several studies showing that the main benefit of eating fibre is the butyrate produced by our intestinal bacteria when they digest the the fibre, and he believes that β-hydroxybutyrate has an equally beneficial healing effect, possibly even a better one. Certainly there are a lot of posts on these forums from people who believe that their IBS and other bowel problems improved dramatically as a result of eating keto.

Yes, ketogenic eating helps it for two reasons: The butyrate you mention; and that people stop eating tons of crappy food, to include grains.

Whether it is 100% healing… it was not for me. It was massively helpful yes. I still had issues. Taking up drinking homemade milk kefir improved things further, but even still it’s not 100%. So I suspect the curative is more than that at least for some.

Kinda wandered afar, we did, but back to the original point, if there are some forms of sweeteners that actually do damage to the intestinal wall, it’s important the keto community know what they are so they can be avoided. Butyrate helps generate good bacteria, it doesn’t fix intestinal walls.