No one wants to hear it

My boyfriend makes a joke of it all and says he’s trying to get diabetes. He would soon change his mind if it actually happens to him, but for now, there’s no changing him as he doesn’t want to be changed. When (if?) he’s ever ready then I’ll help him.

To be fair, not everyone is eating “junk” or not knowingly anyway. People aren’t just resisting our WOE because they can’t be bothered! I for one believed I was eating a healthy diet. Plenty of wholegrains, vegetables, pulses and low fat protein. Occasional treats thrown in. That is what I was told to eat, that is what I believed was healthy. I didn’t know why I was getting fatter and feeling sicker but I didn’t blame my diet. I went to the Drs because I believed I had bowel or ovarian cancer!
I found Keto by a lucky accident, but it took a leap of faith to try it! And I did consider it might be difficult to give things up. Not necessarily chips and pizzas, but fruit, rice and potatoes, even beetroot and carrots! As it was the more my health improved , the easier it became and I would never go back.
But to be fair, all the time Keto is vilified by the mainstream it is difficult for people to embrace it.

Maybe there is a need for Carb 12-Step programs.

The cycle seems somewhat similar to drug or alcohol addiction.

ll health is being normalized so as to not make the average sick person feel less than normal.

Amen sister. Goes hand in glove with the cotton-wool wrapping treatment of everyone these days.

Patrick,
I was just bemoaning this fact with my daughter. Everyone is HOPING you say:
“Just take this pill once, change nothing, and the weight falls off”

and I HONESTLY expect them to ask “Do you have an extra pill I could have?” Because they appear to be THAT FRIGGIN’ LAZY.

I have helped a handful of people that are close to me. But I just had one lady who did not start it that I ran into back in March, and just 2 days ago. She said: “I looked into Keto and realized I can’t give up dairy”.

This qualifies as the WORSE excuse EVER, because it’s simply not true. WTF?

But I have stopped offering to help people, and if people ask, I tell them I found KETO, Carnivore and Fasting. I will never go back, but you have to do your own research.

It’s helping me now. I have neighbors who NEED this, but CANNOT give up:

I’m done. I can only help 1 person today. And I choose ME!

Ooo, this is a good thread. I too believed that I needed complex carbs and low-fat dairy and meats. I truly believed they were the path to a healthy body. I started keto thinking I’d use it to get back to my normally healthy (slim and strong) body. But now, reading and learning about the underlying needs of our bodies, im realizing that lchf is more a way of life, not a temporary fix. I have no doubt that I’ll try adding in a very few complex carbs, after I get to a reasonable body again. But this time, I’ll watch what happens. See how my body reacts. If those few added carbs result in unwanted changes, they’re outta there! And I will learn. I guess I still have one foot in the door of “some complex carbs are necessary”.

Do you have a post somewhere or blog where you describe what you did? Your body is so beautifully toned - my props. My belly is too stretched out to ever be cut without a tummy tuck (and not really a goal of mine), but my husband has always wanted cut abs. He has been on keto with me now for over five weeks and has lost the little bit of weight he carried in his belly for the first time ever - but he is still looking to know how to get a six pack. He excercises faithfully and always has. Any tips? How long did it take you? How much weight did you lose? Thanks.

I finally had a vision of sorts – literally I woke up at 3am and my subconscious in a ‘voice’ told me that I would do that lowcarb diet or I would be dead within three months. Like the voice of God or something.

Wow; I love this and totally believe it is for real. So inspiring and humbling.

Before keto, I was so depressed about my weight and years of food addiction, that I had no hope of ever being able to control my eating or losing weight. This time, I felt so broken that I honestly prayed to God and my guardian angel for deliverance and to show me something. It was the worst I have ever felt and I was ready to do anything.

Within a few weeks after that, I kept seeing keto success stories and hearing about keto. One of those success stories took me to dietdoctor.com website. I read every single one of the success stories - several times over. It was exactly what I needed - I knew these people had experienced all the pain and hopelessness that I had - and they came through it, seemingly effortlessly.

After that, I found this forum which is what gave me the tools to get started. I lurked for about a week and then starting posting questions for help. I was so afraid to try another “diet” - again. People here helped me start, and that was all I needed. Now,
this has become a WOL. God bless!

eople aren’t just resisting our WOE because they can’t be bothered! I for one believed I was eating a healthy diet. Plenty of wholegrains, vegetables, pulses and low fat protein. Occasional treats thrown in. That is what I was told to eat, that is what I believed was healthy. I didn’t know why I was getting fatter and feeling sicker but I didn’t blame my diet.

When I was young, and was getting hip-py, the nurses at the blood bank where I worked nights assured me I had to drop my protein and fat and increase my whole grains and make sure my calories were low. Meat = the devil… whole grain pasta with a tiny bit of olive oil and herbs = great.

I ate a snickers bar and a diet coke for ‘dinner’ – while skipping breakfast, and eating an ordinary (lunch truck burritos and coke) lunch – for about 8 months. Couldn’t figure out why I felt like crap and did not lose weight. Actually I think I lost a little, but probably LBM, and gained fat. I had no energy except in the afternoon (after I’d eat). They used to laugh but say well, 240 calories for dinner is great, but be sure you get enough whole grains and fruits in your other meals.

They didn’t know better. They were taught by the mainstream industry.

I worked for a textbook corp for 14 years (until 2018). Their nutrition books – all of those corps – are a nightmare. One year, the main book – nurses and doctors and nutritionists in college use this – explained how eggs were bad, red meat was bad, low-carb dieting was a dangerous fad, and you could not be healthy without whole grains. Oh yeah and supplements of any kind were just expensive urine, and if you wanted to supplement your health you should just drink Red Bull or other similar energy drinks. That was… I think 2013-2016 sometime.

After that I started offering to paypal my coworkers to do anything in the nutrition discipline because I’d go home just ENRAGED. They agreed to do it free so they didn’t have to hear me bitching about it lol.

I have a family member, young woman with three young kids and a husband, who was diabetic. The whole family was (stepfamily). On holidays the family house was insane with food and I would ask if there was something that might be lower in sugars for the diabetics (which would be ALL of them except the married-in relatives like her husband) and would be told no, and as her husband once put it, her food was her problem.

She had a foot amputated, then the other, then went blind, then a leg, then died. She left three little kids and a husband. Because he would make NO effort to help her. Because hey it was HER problem. I really hated him after that. (My mom died when I was 9 so I might be a tad hypersensitive to the topic). And when I see stuff that DIS-educates medical people – the very people who will be telling diabetics how to eat – I see it as little more than industrial-scale murder.

No blog but i was interviewed on Dave Feldman’s podcast just yesterday. I used to be the chic who worked out really hard and did not look it. I go over a bit of what i did with Dave. But for me the secret sauce was strict keto and intermittent fasting for fat loss. Heavy lifting for shape.

i was interviewed on Dave Feldman’s podcast just yesterday.

You’re probably too young to know the movie “Sixteen Candles”…

Ohhhh, I saw the thread title and will def. check it out!

OMG, it was dietdoctor that started me on keto. Thanks! I couldn’t remember what got me on keto ( meds and already bad memory do weird things to my brain).

I guess it all depends on exactly what you mean by “No one wants to hear it”. Seems to be selling a lot of magazines and books. 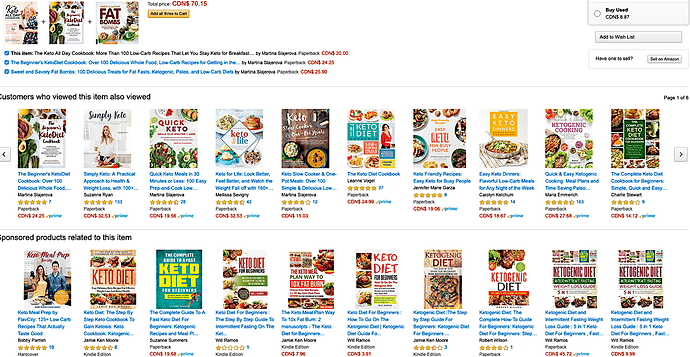 Wow! Since it is so widely “advertised” you would think that when a person mentions they are doing Keto, it would not receive so much negativity.

You’re probably too young to know the movie “Sixteen Candles”…

Watch the show she was on, she looks amazing on there too =).