I bought the following from Walmart and it has arrived. It’s Model AF101CCO.

This model has a dehydrator function. My immediate intention is to use it to make beef jerky. I eat a lot of bacon bits and I’ve wanted the alternative of beef jerky. Since I have yet to find any commercially available jerky that is not loaded with carbs I decided to make my own. I’m going to use this topic to describe my endeavours.

I started making my own because of the carbs and sugar in commercial jerky - plus I don’t like sweet beef.

I wish I had a meat slicer but good ones are very expensive and take up a lot of room. To get my jerky sliced thin I slice it when still half frozen. Just enough for the meat to hold up under a sharp knife but not so frozen I slip and cut myself. I have special gloves I wear when using my really sharp knives.

No one saw Alton Brown’s beef jerky episode where he used box fans to make jerky?

This has the wording but you don’t get the full experience of seeing the fans (and it only has one tablespoon of honey): It does use soy sauce, but you could use naturally fermented or maybe coconut aminos.

Oh, I forgot the Worcestershire sauce is carby too. You’d have to calculate the carbs.

I have the day off, so I’m going to try my first experiment.

I’ve got some Savoury Choice sliced boneless chuck marinating in a bowl of Himalayan salt water. After I finish my morning coffee I’'m going to set up the air fryer on the balcony, run an electric cord out to it and get going! I think I’ll slice the meat into narrow strips.

Yes, there’s not much space in the cooking compartment. But there’s room for multiple layers and Ninja supplies one additional rack. I’ll look around to see if I can find something similar. I could probably fit 3 or 4 nested racks in there.

I marinated the meat for a couple of hours. Had I been more cook-savvy I guess I would have seen this coming: the salt water extracted the fluids and presumably water soluble minerals and vitamins from the meat. So I bottled the water to drink. I tasted already and it’s about the same degree of saltiness I drink every day, so no big deal there. I’m also presupposing that anything that leached out of the meat is edible. 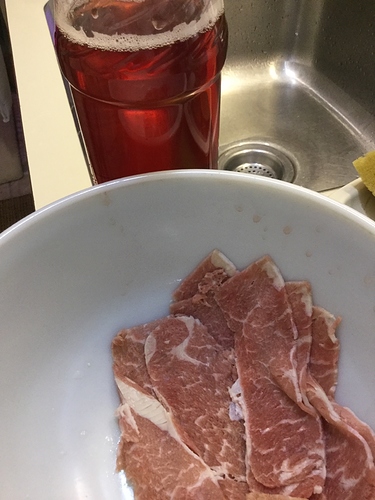 We made jerky in a multi-layer dehydrator when I was a teenager. It was good! Of course we also made apple rings from the fruit from our yard.

Sliced, in the hopper and ready to go. As you can see there’s quite a bit of space in there, more than I expected (!): 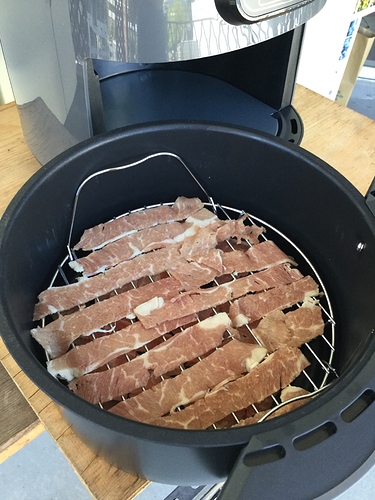 I’m using the Dehydrate preset. The temp is 150° F and the time defaulted to 6 hours: 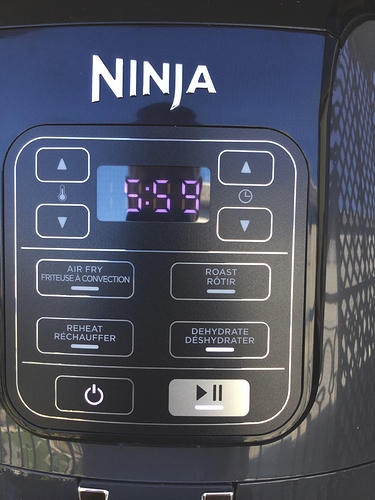 So now off to do other things and let it do it’s thing.

I think that is what my regular dehydrator defaults to temp-wise on the meat setting. And I usually ran it about 6 hours - longer if the meat is thicker and shorter if I coudl get it sliced real thin.

Did not need 6 hours. That was too long for this very thinly sliced meat. The dehydrating instructions advise to roast the meat for 60 seconds at 330° F after dehydrating to pasteurize it. I flubbed setting the timer and ended up cooking it for 15 minutes before I realized what was going on! Result, very dry and brittle like very crisp bacon. In itself that’s really OK, I want to use this as a bacon bit alternative, so being easy to crumble is an advantage. The taste was a bit like charcoal, as well, but still had some meat flavour. Also, there was noticeable fat in it which I didn’t expect. So next time, shorter overall dry time and definitely 60 second roast time. So it’s going to take more practice and experience to get this the way I want it.

Also, next time rather than marinade in salt water, I might just roll the meat in dry salt and rub it in a bit. Maybe that will leave more flavour in the meat. 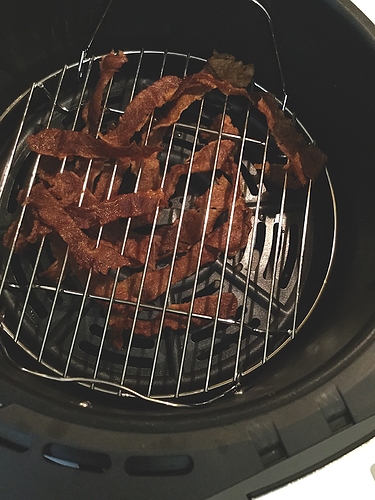 The ‘marinade’ wasn’t really a recipe. It was just plain water salted with Himalayan pink salt. I didn’t even bother to measure the salt, just dropped in a couple of scoops (small scoop!).

What a fun kitchen experiment. I never thought you could make jerky at home.
Reading about lots of carbs in jerky had me worried- I’m sure mine doesn’t taste sweet! I’d eaten some today while waiting for dinner to cook.
…
Looks like I’m lucky, my local jerky has no carby ingredients and contains less than 1% carbs. How annoying to buy sweet jerky!