Absolutely ! Great point. I like my coffee strong enough to stand a spoon up in it

lol
But then I do use my shot of heavy cream, Sucralose drops, and vanilla extract… And before anyone says it, yes, I can still totally taste the difference between good and bad coffees… Or strong or week coffees.

So anxious to get my Ethiopian Yergacheffe

I used to like the big packages and selection at Costco (now we shop Sam’s because I get a free membership on my parents plan) but the thing that used to kill me, was that I’d get a bag or two, find one I really liked, then they’d quit carrying it

That was where, and how I found out about Ethiopian coffee…

I read a bunch of reviews for there beans, and most were really good… But you always read those few negative ones, and it makes you think… Hmmm.

Hey Paul, I’m definitely not as discerning as my GF… But what I like is strong, yet smooth without bitterness.
And yes, the stuff I got is still definitely not cheap, but about the same as a lot of stuff at our local grocery stores. I mean, Folgers Yuban, etc aside. That stuff tastes terrible to me now.

If you want to go whole-hog, you can roast your own. I’ve always wanted to do this, but roasters are expensive.

I might not be able to tell it was decaffeinated by taste, but when I started getting that ugly, sickening headache from caffeine withdrawal, that’s when it would be really bad !

If ever I have to drink decaffeinated, I’m going to be like… Just give me a minute to run out to my car for a couple caffeine tabs

I’ve been cold brewing for a few years, too. Love it. I use a 4-liter glass vase. That makes a 4-day supply. I’m using Folger’s Black Silk at the moment. I generally prefer very dark roasts because I love the intense coffee flavour. I grind my own a lot, but for me roasting would be a bridge too far.

I use this one: 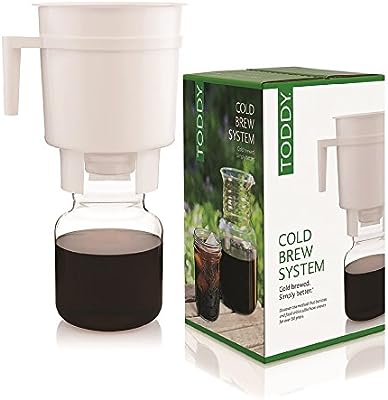 I’ve heard people say roasting your own is great, but that maker uses 12 ounces of coffee, and it’s hard to roast 12 ounces at a time. A home roaster for that is easily $300+, and they supposedly don’t last all that long.

Yea, I can drink cold brews too, but haven’t done one since I’ve been doing keto. I used to love those sugar filled frapacino’s from Starbucks… Might try a keto version of one of those sometime

Here’s my gear. The expensive item is the stainless dry hopper, 74 micron mesh, I purchased from Arborfab. The tube on the right in the photo is a self-priming siphon. The vase came from my local Sally Anne for $8 minus my senior discount. 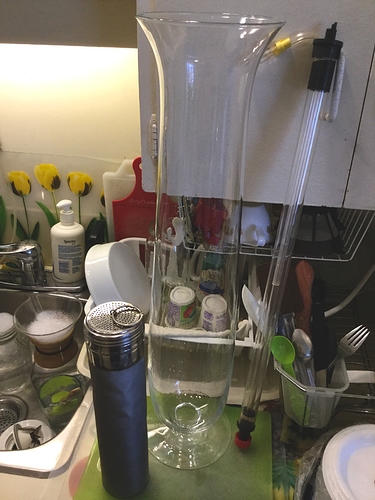 I’m almost afraid to ask how that works.

Quite simple, really. I put the coffee in the dry hopper, either my own grind or as currently Folger’s Black Silk. 132 grams of coffee for 4 liters water. Actually: 4.225 Kg to allow for whatever gets trapped in the dry hopper when I take it out. I suspend the hopper in the vase via a wooden spoon for 24 hours. I started at 12 hours and have worked my way up over the years. I like strong coffee!

At 24 hours I pull the dry hopper and let it drip for about half an hour to get as much coffee out of it as possible, then push a slightly modified nylon cone filter to the bottom of the vase and siphon the finished coffee into two 2-liter mason jars. There is generally not much sludge at the bottom of the vase, but I’d rather leave it there. Hence the cone filter.

Each morning when I prepare coffee, I also pour it through a nylon cone filter just to make sure nothing but liquid coffee gets to Bubba.

I grew up on Peet’s Coffee and after all these years, I haven’t found anything I like better. For years, when I lived in the East and they weren’t in supermarkets out there yet, I mail ordered it. Now I can get Sumatra, Italian, French, and Major Dickason’s Blend in any local supermarket in my area, along with some medium and lighter roasts. I ignore those, because I love dark roast coffee. I make it strong like airplane fuel and drink it black. I do keep decaf around, because as I got older I became one of those people that can’t sleep if I have caffeine after noon. Sigh. But all those roasts that I mentioned are also easy to get in decaf, too.

My favorite is Sumatra, but I also love the Italian. It’s a slightly sweeter flavor in the roast. The Major Dickason’s is a slightly more bitter blend, so you might really love that. They are typically $10.99 for a 12-oz. bag (about $14.65/lb.), but I just wait until they have a sale (which they do monthly) and buy up a bunch for $7.99 (about $10.65/lb.) and put them in the freezer. I know some people think that is sacrilege, but I can’t be arsed to grind my own beans either. If you don’t have a burr grinder at home, it’s not really worth the effort, so I don’t bother.

On the website, Peet’s also has a number of East African specialty roasts and blends that you might like. Prices vary, but they’re $2–$3 more expensive per pound. They also have things like a dark roast sampler on the website that is six half-pounds of different coffee, so you could test them out.

I’ve tried Costco coffee and didn’t find it as flavorful or dark as my beloved Peet’s. But it’s also not $6/lb.

Hey Michael, Like I say, I haven’t drank any of those big name brands {Folgers’s, Yuban, etc) for a long time, but when I did, I drank nothing but Folgers Gourmet Supreme. Have you ever tried this ? I liked it a lot better than the Black silk… or French Roast…

I LOVE my coffee strong too, but of course you can take some kind of “light morning blend” and use enough grounds to still make it as strong as you can stand, so then it just comes down to what flavor you prefer.

Hey Zuleika, my GF is a Peet’s freak too

Recently she got some Peet’s called Alma De La Tierra, and she has just been raving about it. Not sure if you have tried this yet yourself, but if you like Peet’s you probably should.

For most of the past few years I’ve ground my own because there are an amazing variety of coffee roasters in Vancouver and they all offer roasted beans, but not necessarily ground. For a while I got on the ‘you have to roast your own to get fresh’ bandwagon. A couple months ago the Walmart where I work had Folger’s Black Silk on sale and out of curiosity I bought some to try and liked it, so ended up buying two. The second will last another couple of brews. I’m ready for some taste exploration again, so likely I’ll purchase whole beans and grind for a while. It’s not a big deal and I have a pretty nice grinder, although not a high-end precision grinder. There are half a dozen different local coffees I already know and like, but I’m always on the lookout for something new.

I drank Folger’s Traditional Medium roast for a number of years, but never Gourmet Supreme.

We drink Peets in my house too. Especially the Major Dickason’s Blend. I live on the East Coast and didn’t discover Peets until it became available where I live.

My favorite bean hands down is Tanzanian Peaberry. Dark roast is preferred over medium, light I won’t touch no matter the bean unless I’m at the mercy of a restaurant or friend’s house. Too much caffeine and not enough flavor for me. I haven’t splurged on the Peaberry for years. I like Costco Espresso that they have roasted by Starbucks. I get a French Roast most often from Grocery Outlet nowadays. 2# for $9.99. The brand is slipping my mind right now (sky blue bag), currently I am using a bag of San Francisco Roasting Co. French Roast I was given. I brew exclusively in an older KRUPS espresso machine and use a blade grinder 45 seconds for espresso. The burr grinders are too inconsistent in particle size for me (not going to spend $200 for a decent burr grinder) or spend my time with a Hario hand crank yet. I only fill the carafe half to three quarters because that last bit of extraction tastes bitter. I was using HWC up till the end of June, went full black or when Fat Fasting Bulletproof with butter and MCT. No sweeteners ever. Embrace the bitterness in life is my motto, important life skill for men, metaphorically. But dark bitter not light roast bitter! Sipping on HWC all day ruins your IF window and that was part of giving up HWC for me, loosing a stall factor. And getting serious about my IF efforts because I like to drink coffee at 6am way before breakfast.