Ketonen levels went up after eating

I am really confused at this point… I’ve heard multiple studies talking about the danger of Artifical sweetners and how they can kick you out of ketosis. I only use Erythritol and Stevia for things like pancakes and chocolete and that’s honestly it. So today I thought I’m going to test my levels.

My last salad meal was around 14:00 pm and I give you my numbers below:

Here is the Recipe:

How can my ketone level increase after eating?

It has been suggested, and the experience of a number of forum members supports the idea, that certain artificial sweeteners spike certain people’s insulin. This is hard to prove, since there is no home test for serum insulin, though an effect on insulin can be inferred from the pattern of the serum glucose response. It is difficult to do such a test, and the test strips are not cheap, so we don’t have much in the way of data to go by.

There are several relevant points, here. The first is that the U.S. Food and Drug Administration prohibits the sale of any non-nutritive sweetener that raises serum glucose. This regulation is intended to make them safe for diabetics to use. Manufacturers must supply test data to the FDA, showing no effect on serum glucose, before the product can be sold on the consumer market.

The FDA cares nothing for any effect on insulin, however, so they don’t require manufacturers to test for the effect of a sweetener on insulin, and there is thus no funding available for anyone else to perform such tests. The other issue is that, while it appears that each sweetener has an effect on some people’s insulin, none of them has such an effect on everyone. Furthermore, no one appears to be affected by all sweeteners, only by one or at most two.

This means that even if one sweetener appears to be affecting your insulin, all you need to do is to switch to a different sweetener, and you should be fine.

That I understand, What I don’t understand is how my Ketone levels spiked with 0.3 after eating. They should lower right?

I would not worry about it. Those are good to see if you’re in ketosis, but as a tool to KNOW exactly what your ketones are, they’re useless. Consider these values. The column after time is my “home” meter; the column to the right of that is my “work” meter. 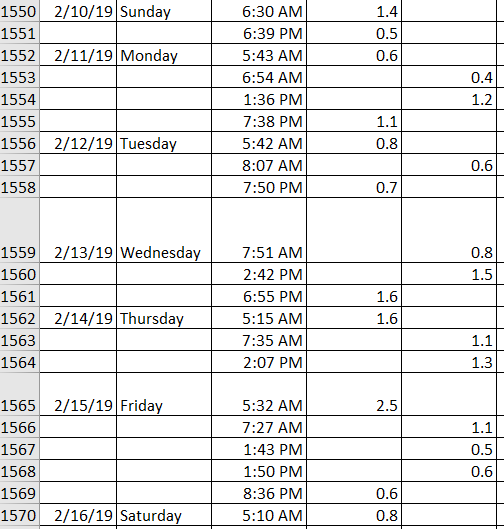 Here’s a test I did comparing two Keto Mojos:

As gross measurement tools, these are fine. If you want to know what’s happening at any time, they aren’t great.

Great example, will just focus on how I feel to figure out of I am in ketosis or not. Thanks for the update!

Ketone bodies are made from fat. Inside most cells fat can be made into energy in a process called fatty acid oxidation (FAO). When FAO is at maximum capacity in liver cells, if there’s still more fat available, it’s made into ketone bodies. Maxing out FAO depends largely on two things: the supply of fat and the supply of glucose. The first point is kind of obvious. The higher the supply of fat, the more likely there will be more than can be oxidised at once even when FAO is going as fast as it can.

The second point is a little less obvious. When glucose is low, it’s the liver’s job to make that, too. It turns out that the process of making glucose — gluconeogenesis (GNG), can sometimes limit FAO because it uses up some of the same chemical resources. Specifically, a substance called oxaloacetate (OAA) is required for both FAO and GNG. Oxaloacetate is commonly derived from glucose, although it can also be made from other sources. So when there is a lot of glucose around, OAA levels tend to be higher, which speeds up FAO, leaving less fat for making ketones, whereas when glucose is low, OAA is low and FAO is less likely to leave leftovers. Low glucose helps ketogenesis in another way, too. When glucose is lower, then insulin is normally lower, too. Lower insulin allows more flow of fat out of fat tissue, making more available to the liver.