I’ve been trying to find the science between how the body reacts in ketosis vs someone who just tries to keep their carbs low. I know some people can be in ketosis with 50 carbs or less, but I do not think that is the case for most people.

When I first started losing weight I was keeping my carbs between 40-50, and lost between 80-90 lbs. doing that. I then started doing more research (I stalled for a long time) and switched to keto and keep my carbs below 20. However, I’m working on a blog post trying to explain keto and would like to be able to explain, intelligently, the difference in ketosis vs “lowish” carbs.

Can anyone point me to good research on this? Thank you!

Honestly, I think the best data or research is testing your own body, as in n=1. Starting at 20 g carbs is a starter’s template. From there, you may need to go lower, or get away with pushing it higher. Let’s say someone comes up with a bell curve showing where people have there carbs set at. It will still be a snapshot in time, possibly skewed to men/women only, age groups, metabolic diseases, athletic/sedentary, etc. Also, some people noticed that with time, the carb level requirement changed as their bodies health modified, too.

I completely agree that everyone is different and that the carb levels can change over time. I know, at least in my experience, just because someone knows about low carb doesn’t mean they know what ketosis is. When I first started I was going off a plan I had followed in the 90s (Protein Power Plan) and knew nothing about ketosis. I had heard the term “keto” thrown around by a few people but just thought it was a different way of saying the same thing - Protein Power, Atkins, etc. So I guess the key is telling people WHAT keto is and why lowering your carbs works. They can then take that info and learn for themselves what works for them.

The problem is that there is no one definition of “low carb”. Some people consider under 150 g/day low carb, but I don’t.

Before “keto” came along many of us were what I consider “very low carb” (and you still might see that around as “VLC”) In my head that’s about 20 g of carb a day and then there’s even debate as to whether it’s net or total carbs. I consider up to 50 g. of carbs as “low carb” and beyond that, reduced carbs compared to the SAD. But that’s just my own personal opinion. There’s no authority for any of this.

Keto I think is somewhat fluid, too. What people used to call VLC is most definitely keto, but as you point out, some people can be in ketosis on 50 g of carb, so I would say the aim of “keto” in particular is to show positive ketones on urine, breath, or blood meters, while that’s not the stated goal of LCHF (even if it is often achieved on LCHF).

IMHO, LCHF with very low carbs and keto are interchangeable as long as you are showing ketones. It’s also possible to be LCHF with very low carbs and NOT be in ketosis. Personally I didn’t see any big difference in weight maintenance between very LCHF with measurable ketones and without measurable ketones, so I’m more along the lines of LCHF. But they are so close I don’t worry much about the distinctions between them. “Keto” is cool and it seems more acceptable to males for some reason–perhaps because the general public doesn’t associate it with “that Atkins Diet” that nearly every woman in the western world has tried at one point in time (fFWIW, Atkins induction is no different that VLC, strict LCHF, and keto IMHO).

Totally in my own mind and probably not many others, I like to see keto as the love child of Paleo and LCHF (and grandchild of intermittent fasting while we are being nepotistic). It’s low carb and Paleo-style clean eating. But I get that others don’t see it that way and will eat very low carb stuff that’s never going to be considered Paleo if it works for their production of ketones .

The difference is that low carb diets don’t necessarily put you into ketosis, which is a specific metabolic state.

When I eat carbs it’s 50g day or less, and I’m generally in ketosis. You will still lose weight on lower carb diets, many people lose under 100g/day. but you are not then in metabolic ketosis, which means the body switches to utilizing fat as the primary fuel. Most low carb diets are ketogenic, actually, I’d argue. I’m not sure when the “20 grams” thing started, but it was within the past few years only.

I don’t know there’s necessarily specific research comparing. You could do a search on Google scholar to find out if any exists, though.

The difference is that low carb diets don’t necessarily put you into ketosis, which is a specific metabolic state.

Phinney talks about a “well formulated ketogenic diet” rather than saying LCHF or low carb.

The Obesity Code pretty much explains this. It’s not about making ketones, as Fung said on the 2Keto Dudes pod cast, it’s about controlling insulin. High insulin levels drive fat into the adipose tissues… low insulin allows it to be released. Ketones are sort of a side effect of burning fat.

I think a ketogenic diet just accelerates it, it keeps insulin very low and basically trains your body to use fat for fuel, because that is what you are making available.

I’m sure someone like @richard can get much more sciencey about it than I can.

Thank you! That makes a lot of sense. I’ve been wanting to read that book. I will check it out.

It’s always all about the insulin - the weight loss or gain is a side effect, or a symptom, of too much or little insulin. The symptom is not the same thing as a cause, as the old credo goes.

Some extra pedantic thoughts: bodies are a dynamic system. They are not a closed system, so many factors affect weight loss and gain other than insulin or glucagon being dominant.

Your body switches into ketosis when it needs to regardless of whether or not you follow a ketogenic diet. For instance, anyone who is relatively healthy will shift into ketosis during sleep (take that, keto nay-sayers!) because you cannot eat during your sleep, obviously. You still need glucose and energy. Sleep is actually a time of intense metabolic activity. Babies actually frequently experience ketosis while breastfeeding too

I would argue that most low carb diets, yes even Paleo, have the majority of people following them in ketosis to varying degrees, actually. Someone very athletic might be in ketosis at a much higher carb threshold eating Paleo while eating mashed sweet potatoes. I would argue someone exceptionally healthy and athletic who has never been in metabolic derangement could even be in ketosis ~100g of carbs on a steady basis. It may be a very low serum level of ketones, granted!

It’s always all about the insulin - the weight loss is a side effect, or a symptom, of too much or little insulin.

Thank you!! That’s a great explanation. Even though I’ve been losing weight for awhile I feel like there is still so much for me to learn and this site and the podcasts are helping so much. 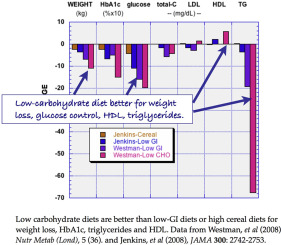 Dietary carbohydrate restriction as the first approach in diabetes management:...

The inability of current recommendations to control the epidemic of diabetes, the specific failure of the prevailing low-fat diets to improve obesity,…

Most individuals can achieve ketosis at 20 TO 50 G CARBS DAILY . here is a link to citation

If you haven’t already looked at the DietDoctor site, I would head there for info comparing Keto to low carb. Tons of videos, etc. (FYI: For $9.00 a month you can become a “member” which will open up a whole new level of resources not available to the general public.)

Also, they will let you link their research articles to your Web site or blog.