I found this at vons today… brand: Ratio 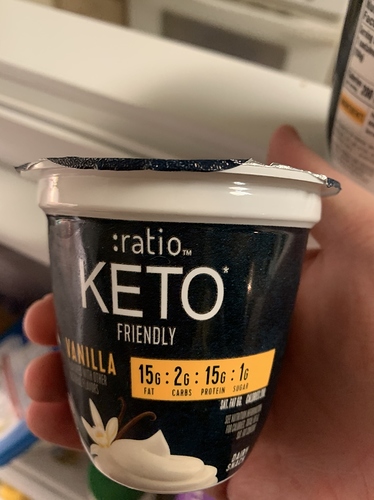 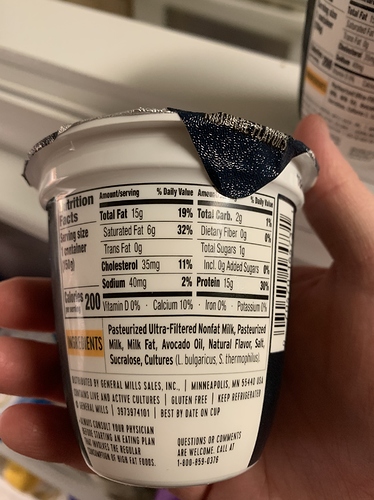 Do you think this is actually good to have on keto? I don’t want to be fooled by labels…

Well, I can base my options only on the label…
The numbers are small and keto doesn’t ban anything so yep, it fits. No ingredients bother me (if someone else want to consume it. I hate sucralose and sweetened yogurt with a passion but it’s my taste) except it’s dairy with lactose so it’s not for everyone in big amounts. I prefer using tiny amounts if lactose is involved, some people should avoid it entirely (I will try that myself) but this is individual, many are just fine with lactose (some limit is still there as it’s sugar but a bigger amount can be okay).

Still, it’s too processed to me. I can’t say it’s bad and of course many ketoers eat lots of such things, it’s individual, again.

Could you not just buy full fat Greek or Bulgarian? You’ll be paying a premium for the word keto being on the label…

I would say that, although there are better products out there, this one isn’t particularly terrible. It is extremely odd, however, that they start with skim milk and then add milk fat and avocado to bring the fat content up. Why not simply start with whole milk or double/heavy cream?

For myself, I don’t particularly like sweet yoghurt, because they generally make it too sweet. Since this product has sucralose in it, I’d probably avoid it, myself. I don’t need a lot of sweetness these days, now that my taste has changed on keto. What I like is full-fat unsweetened Greek yoghurt with a splash of cream. On those rare occasions when I want to counteract the sourness of the yoghurt, I can do it by adding a dash of artificial sweetener myself, and thereby control how sweet the serving ends up.

In the U.S., Stonyfield Farms makes a yoghurt from heavy cream, but just try finding it in the stores. I have a hard enough time finding a real-milk yoghurt with active cultures; mostly what the local supermarkets sell is fat-free and loaded with sugar.

Every Greek yogurt brand on the shelf had 4g of sugar, 7 g, 9, or 15g! I was shocked. This is the only one on the shelf with lowest sugar content

If you don’t mind the sucralose in this brand, then go ahead! I use a brand that has 4 g of sugar per 6 oz. serving, but my serving size is about half theirs, so I don’t worry too much about it. Not only that, but since it contains no added sugar, the sugars it contains are galactose and lactose, which aren’t as bad as sucrose and fructose.

I am kind of shocked too… I never was into yogurt so I didn’t follow these things when I started to watch carb/sugar content but 15g? 15g sugar would make a dark chocolate borderline too sweet for me at the times when I want my chocolate really sweet! And I like my plain yogurt/kefir definitely not sweet as I don’t eat them as sweets and I am used to them not being sweet. I only use cream in desserts so the 3.2% sugar is fine there, I could handle more. But if a dairy is less fatty and more watery, I feel them sweeter somehow? Milk is very sugary to me now but my sweetness perception has been changing since many years.

But even for some normal person, 15g sugar in a greek yogurt?

Don’t they use the carb / sugar count from the milk used to make the yoghurt, most of which is used up during the fermentation process?

I’ll only buy yoghurt with simple ingredients, milk, cultures. Anything else is just not necessary.

A lot of what they are talking about is flavoured yoghurts, which always have a lot of added sugar. And almost all of the fat-free yoghurts are flavoured, because otherwise they’d taste like crap.

I never saw flavored greek yogurt, fortunately but of course people like those things and after their 55% sugar chocolate, 15% sugar is nothing… I got too far from that world but I always went for plain anyway.
But fat-free yogurt? Is it a thing? Oh my. Yogurt is already mostly water, I never understood the hype. Kefir is a nice sour thing at least (if I can handle the natural sugar in it). But I am a sour cream and cream fan, they are more substantial. Sour cream with a 12% fat content is already outrageously not fatty, too watery to me (it’s like 1.5% for milk). Somehow a smaller amount of a fattier stuff works better for me. But we don’t have more than 25% for sour cream (20% is the norm) and barely above 30% for cream here. But I am pleased with that.

Flavoring often tastes crap too but tastes are quite different as we know. People love so weird things from my viewpoint…

But fat-free yogurt? Is it a thing?

I bought it once as there was no full fat available. It was awful, had the strangest texture…

While I’ve never actually tried it because yogurt repulses me, I’ve heard good things about this recipe. It’s quick and easy to put together, no fermentation required. Only 2 net carbs, with lots of fat. 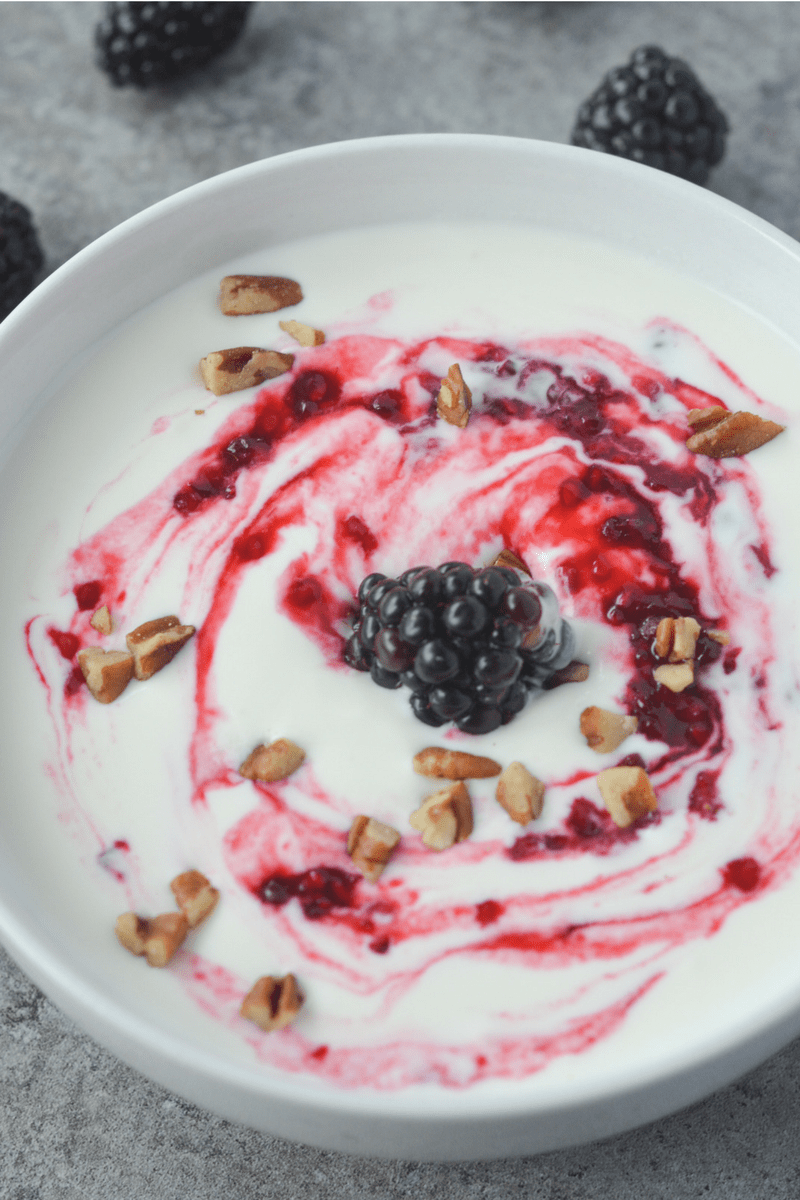 This low carb yogurt is super easy to make and actually good for you! With just 2 net carbs (for the base), it's the perfect way to brighten up your morning! I've always been in

Sounds good. Not yogurt, way fattier but that may be a plus

One should be careful with the sweetener, surely people need very different amounts of it (zero sounds good to me but it’s about taste and sweetness perception).
Simple but I never tried to mix sour cream with whipping cream… Now I even have mascarpone… I will think about this when I need to boost my calories.

Where abouts are you from? The highest fat sour cream I can find in-store here is 18%, most are 14%, the lowest is 1%, how can they even call that sour “cream”? It’s thickened cultured milk, at best. I’ve made true sour cream from cream scooped off the top of farm-fresh milk before, and store stuff doesn’t even compare. It’s delightful, doesn’t even make it to the end of the day

Speaking of thickened milk, I noticed the other day that the ice “creams” in my dad’s freezer are actually labelled as “ice milk” and “frozen desert”, there’s no cream in either of them. They took out the best part of ice cream

The issue with that stuff is that it uses avocado (high PUFA) oil. Why? 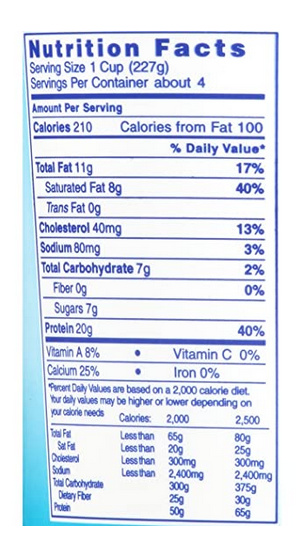 I live in Hungary. Sour cream is very important in Hungarian kitchen and I doubt we have those low-fat abominations as it’s sour-cream, not even yogurt… We have 0.1% “milk” (I refuse to consider it milk but never tried it) but I only saw sour cream with 12%, 20% or (rarely) 25% fat. The first 2 are so common you should find them in the tiniest village shops. My SO’s mom always buy the 12% one for some strange reason (her diet is fatty so I don’t understand) so I taste it sometimes and it’s quite bad, I wouldn’t want it for free but I can’t imagine certain soups without it and it’s BAD just too watery so yeah, I use that. 20% is another world, creamy (usually, not all brands), richer, very nice.

I have very vague memories of normal ice cream though I had it a few time at my SO’s mom, again

Some are very bad indeed, close to flavored sugary frozen water. She has better taste so that happened once but when I look at ice cream labels, I see that it not even remotely follow my taste and I talk only about the macros…
It seems normal ice cream has whey and skim milk (and 7% fat, 23-30% sugar and 2.5-3.6% protein). Sometimes fatty milk powder is present (14% fat in the ice cream)! And I found cream in one (11% fat), I’ve just looked at about 6 ice cream.
I have a bit more than 20% fat in my own ice cream but only because I don’t use added fat if possible (I too easily overeat fat without that. especially if I use ice cream) and I pour my own chocolate (63% fat, the added fat is there but I use a little amount and chocolate is unavoidable if I eat ice cream :D) on top anyway… That chocolate could partially salvage better-tasting normal ice cream if I would blatantly ignore all the 4 different sugars among the ingredients…

Yeah, it can’t be good, it was obvious to me. I always went for the fattiest dairy possible and even as a kid, 2.8% milk was an option.
I thought skim milk is the 1.5% one, it barely has fat (milk needs SOME fat even if someone isn’t a high-fat dairy lover)… It’s not so good but drinkable in a pinch.

In the U.S., “skim” legally means 1% millkfat. (A lot of food labeling in the U.S. is defined by government regulation, to make it standard across the nation.) It’s ghastly grey-coloured water, and I won’t drink it, even if that’s all there is to drink. The lowest amount of fat in milk that I can tolerate is 2%. Whole milk is 3% milkfat.

There are similar percentages for defining “light” cream, “heavy” cream, and what we call “half and half” (which, in theory, is supposed to be half cream, half whole milk). British creams contain slightly more fat, and there is also the lovely category of “double” cream, which is like U.S. heavy cream, only much more so.

(For those who might enjoy the story, one of the American consumer magazines published a hilarious article, twenty or thirty years ago, describing the terms for labelling types of cheese, as defined by the U.S. Department of Agriculture. They ran from plain “cheese”—the natural, basic product—all the way to something called “pasteurized process cheese food spread”—which comes in a spray can. Each descriptor means something specific, and the more descriptors, the less resemblance the product bears to the real thing. The article was hilarious, as I mentioned, but at the same time it was horrifying.)