Not especially, just showing both sides of the coin my friend which you seem frightened of for some reason.
If you don’t like Ivor’s work then ignore it?

What nonsense… he is simply presenting the data as he sees it. And he is far from being alone.

To see quite how precisely his cherry-picking is Keys-esque, please look, for example, at point three in this document:
http://sonorouschocolate.com/covid19/index.php?title=Cummins-2020-09-08&fbclid=IwAR0bkx3ck2OZVMCninPZMUIFPm5dBqPdww5ZaQqJE2HJstYvnBTG7bYujd8

I’m OK with that.

The more time and effort I spend on my education, the more I realize how little I know. But the upside is I’m learning how little other experts know too, so it’s becoming harder to fool me, as long as I don’t fool myself.

If you are sure that lockdowns don’t work then you need to explain Vietnam, or Taiwan, or New Zealand, or states of Australia other than Victoria, or Victoria for that matter.

If you think this is a “casedemic”, and cases are decoupled from fatality, then you have to explain why an increase in cases predominately among an age demographic that doesn’t die from this disease should suddenly show a signal in deaths.

The reason we have more cases is likely partly because we’re testing more as can be seen from the total test numbers, but also from more cases as can be seen from the percentage of positive tests - it’s well described. You don’t get 30-40k new cases in the USA every day because of some accounting error, or because you have PCR cycles dialed up to 11 and are finding dead virus. You get it because you let an exponential progression get out of control.

The reason why the relationship between new cases and deaths has changed is because we appear to be getting better at keeping people alive longer. Plus most of the new cases are in people under 40, but that doesn’t mean these infections are harmless, they keep a reservoir out there for this virus to survive long enough to become endemic in humans, not to mention reports of long hauler issues.

I’m not certain that Ivor is wrong. I am certain that we don’t have the information to make the kinds of claims being made about the progression of this epidemic.

And don’t expect me to jump into twitter battles over this. I have a full time job just keeping up to date on the research in my field.

If you want to hear from real experts in virology, who have real doubts and can frame what they do and don’t know with precision, and have no interest in claiming to know something they can not … subscribe to https://www.microbe.tv/

If you don’t like Ivor’s work then ignore it?

So we should just say nothing because it’s Ivor? Wut? He’s been the paid mouthpiece for his patron for years, not sure how much respect that’s bought him in terms of us genuflecting now while he’s cherrypicking data to suit his headline-grabbing claims.

“He’s wrong to make these claims and here’s why” is not character assassination, it’s pointing out that his claims are ridiculous/unsupported, and appeals to authority - especially one as precarious as Ivor - are laughable.

He’s far from alone in the keto space in terms of suddenly proclaiming himself to be an infectious diseases expert, and he can expect the same scrutiny that he’s made his new shiny public persona/speaking engagement/keto-famous career out of subjecting others to. Goose/gander and so on.

This isn’t “character assassination”. This is precisely a critique of his use of data in a teleological service of an ideological point.

Precision as advertised is absent. Character sniping is evident.

People who are making bold factual claims about this epidemic, using all the tricks that Ancel Keys himself used (cherry picking, confirmation bias and so forth) make me worry about the integrity of many of the people in our community I once thought were straight down the line. A pandemic should not be a plaything with which to make tendentious libertarian points.

But to have this cock-sure certainty that you know the answer just because you can torture a graph to make your libertarian point - that’s depressing.

Yes. His stuff no longer passed the smell test for me

If a siren call has a carnival-hucksterism tune about it (however “lilting”), and is singing straight from Ancel Keys’s crooked playbook, then we rightly stop ourselves and our community from being dashed against the rocks.

If you think Ivor made excellent points because graphs, I’ve got this chap called Ancel Keys you should read - he’ll definitely convince you that saturated fat is very dangerous, with similar “excellent points” and graphs too!

Gah, dang it. Now we have copy cat spread:

If you still disagree, I have some theories by Ancel Keys to sell you!

It’s a low carb community. Ancel Keys has been set up as a bogeyman in all our early learning stories. Allusions to Keys are character assassination.

Even I can hear Ivor’s emotive language when commenting on the social restrictions, but not yet referenced in this discussion. It is possible to separate the science information he presents from his opinions on the damage of lockdowns. It is. No presentation of examples of the mentioned teleology have been made. Put the sniper rifle down Nick. Please.

Or, actually aim a bit more accurately and shoot the troublesome libertarian issue duck. (but that may go against the forum rules).

So we should just say nothing because it’s Ivor?

That’s putting words in my mouth… there is a great deal of COVID crap out there… you have to decide which is worth reading and what isn’t.

Ivor presents data with some analysis. I happen to think the way he presents it and analyses it makes a lot of sense… does that mean I believe everything he says … possibly not. We won’t know for a few months which is the correct analysis but his logical approach is appealing to me.

I’m not certain that Ivor is wrong. I am certain that we don’t have the information to make the kinds of claims being made about the progression of this epidemic.

You have gone back up a bit … thanks.
Not that I hope it makes the slightest bit of difference.

then you need to explain Vietnam, or Taiwan, or New Zealand,

And you in return need to explain Belgium and Peru… two of the hardest lockdowns and some of the highest deaths per million of pop?
Unfortunately it’s not easy but I’m very gad that Ivor is out there prompting people to actually think about the simple story they are being presented with. Every time someone questions what is happening around them is at least a starting point for hopefully intelligent discussion. This has been sadly lacking in many politicians and so called “experts” over the last 6 months.

I’d normally try and respond but I know your intellect is far more developed than mine Nick.
So I’ll just agree to disagree here as no I have no wish to become cannon fodder for your prestigious brain.

I would however point out that your quoted piece for Point 3 interestingly uses 10 year mortality data … if you look at the UK 5 year average then the pre COVID period mortality rate was about 5k fewer than the average up to week 11.
So your counter-arguer has also used a “cherry picked” piece of evidence. Maybe there was a bit of “dry tinder” about after all.

So you want everyone else to take the

approach instead of speaking up on his errors?

I wonder how bad the world would be if we all turned a blind eye.

Also, the fact that someone was wrong on one point does not detract from the validity of that person’s other work, as the career of Ancel Keys demonstrates. He did some solid work that has stood the test of time, and he did other work that was at best shoddy, and at worst, possibly even fraudulent. His valid work is nevertheless still valid. To repeat the beautiful Feynman saying, “The first rule of science is that you must not fool yourself, and you are the easiest person to fool.”

I’d suggest if you want to take something up with Ivor you try contacting him directly on twitter stating your case rather than posting on a forum which he seems to no longer be a member of.

Folks, before tempers get too heated, let’s take a break. I’ll reopen the thread in a bit.

Okay, have at it. But as always, please try to discuss data, not people.

I have nothing else to say because others have already written more eloquent things previously.

Might he be looking at the short-term mortality fluctuations (STMF) data for the past 2 decades including weekly deaths during 2020? It’s linked from mortality.org and demonstrates graphically mortality excess and deficits (to the norms) in a list of countries. It looks like the data Ivor was communicating via the original author ‘PLC’ @Humble_Analysis (looks like a Twitter handle). Not sure of PLC’s credibility to be used as a resource.

I still think Ivor’s cherry-picking and misstatements about the actual data really render him in a bad light here.

I would however point out that your quoted piece for Point 3 interestingly uses 10 year mortality data … if you look at the UK 5 year average then the pre COVID period mortality rate was about 5k fewer than the average up to week 11.
So your counter-arguer has also used a “cherry picked” piece of evidence. Maybe there was a bit of “dry tinder” about after all.

Mark, both the prior 5 years and 10 years in the UK were in a noticeable uptrend for mortality. The difference of those weeks versus the chosen-by-you 5 year average is less than 4%. Alex Selby’s comments are sound. I don’t know what December 2019 was like, but Alex’s point included it, and if it too was ‘positive’ (like the first two weeks of 2020) then it would further dilute things. 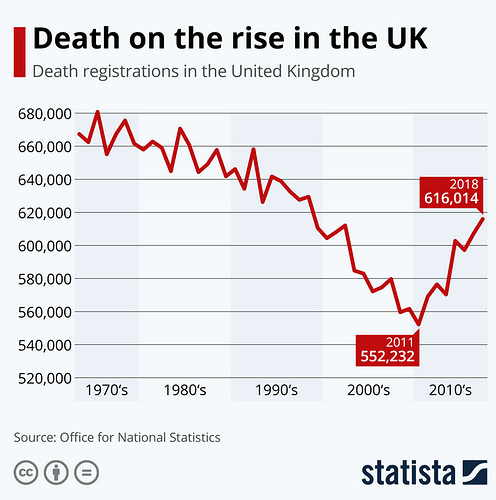 Ivor’s deal was comparing 2019 with 2018. Choosing 2018 is cherry-picking indeed, rather like climate change deniers picking 1998. Prior to 2018, we’d have to go back to 1999 or earlier to find a higher mortality number than 2018 - and this is with an increasing population all the time.

If, after 2018, mortality declined slightly, it would be no surprise. Yet Ivor acts like it’s a big thing, and he is false there.

“Maybe there was a bit of “dry tinder” about after all.” Well of course, but that’s not because of any substantial thing that happened in 2019. The UK had weeks where the mortality rate went to more than 100% above normal, due to Covid-19. This was not due to a less-than-4% difference in mortality in certain prior weeks.

There is a LOT of “dry tinder” and yearly mortality fluctuations in the past 5, 10, 20 etc. years does not change this. Lots of old people and people with multiple comorbidities in the UK. We all know pretty much who are vulnerable, correct? People with multiple comorbidities and especially the elderly within that group. Even with the deaths thus far this, year, there is still a LOT of “dry tinder” left.

Maybe you might prefer this guy! Short, snappy and to the point!