Listened to this during my morning workout, about Carrie Brown (the third of the 2 keto dudes):

She talks about getting genetic testing done (and having it analyzed by Ted Naiman).

Has anyone had genetics testing done? If so, what tests did you get?

My limited understanding is that you have one place to get the test done, but then you have to pass it through a place (or maybe a person) who then analyzes it.

I’m not so much interested in ancestry (though that would be nice to know), but what effect this has on me, particularly diet. For example, maybe this could tell me why I seem to do better on higher protein, (much?) lower fat, I can’t handle gluten, etc. (And I’m 50% Italian, so that’s odd about gluten, at least how we classically view what “Italians” eat.)

As I understand it, a couple of the mail-order testing places are set up to tell you your ancestry, so that if you want a medical analysis, someone else has to do that. Also, the cost of the analysis depends on how many gene sites you want looked at, or so I understand. The more sites examined, the more reliable the analysis, but also the more expensive.

I would be wary about interpreting any results as absolutes, however. The fact that we have a specific genotype does not necessarily mean that the genes are expressed straightforwardly in phenotype, apparently. We are learning a lot about how environment affects the expression of genes, and it’s not as cut-and-dried as the earlier understanding of Mendel’s work originally led us to believe. There’s a log of nuance, and it also turns out that Lamarck’s idea of the inheritance of acquired characteristics isn’t so far off the mark as once was thought.

I agree with that, as Carrie Brown relates her story of going keto and effectively curing bipolar. Genes may mean you’re more likely to be bipolar (given our food environment), but you’re not constrained to that.

Jimmy Moore had a podcast where he was doing tons of tests on himself. One was PSMF (protein-sparing modified fast). Both he and the doctor leading him through these HATED PSMF. Hated it.

However, Jimmy Moore got hypoglycemic from it. They theorized it was because of a poor glucagon response.

But they also did a 90% fat test, and Jimmy had even worse hypoglycemia.

They then had genetic testing done and had an expert on, who had a number of theories about why Jimmy had these results.

It was really interesting.

It is of course difficult to know how much of that genetics is actually true. But Carrie Brown had MTHFR, which is a known problem with b vitamins:

(This sells methylated B vitamins, but also discusses the issue.)

If it was possible to take a test and get some sense of what one can eat or not eat, that could be useful.

Something like this, but I’d have to see if anyone took this and if so, if it was helpful: 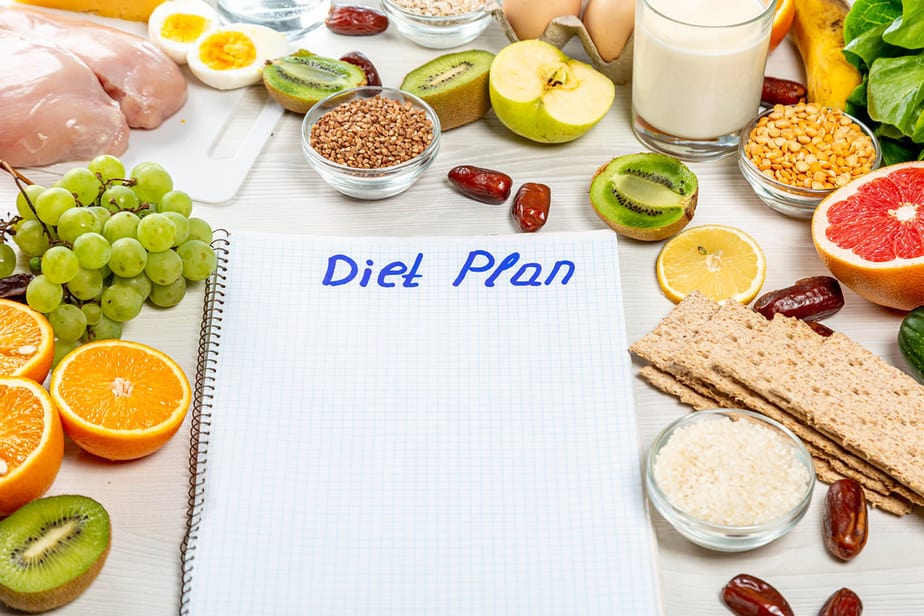 DNA Diet Testing - Is a Personalized Diet Test the Best to Lose Weight?

DNA diet testing promises personal diet plans based on your unique genetic profile. Learn what you really get from these tests in our DNA diet test review!

Search for prometheus.com there have been a lot of discussion about health and DNA test on the forums. I had mine done on Prometheus it’s now owned by my heritage which is a ancestry oriented group but they bought them out but that’s the best source that I could find and I think Richard had talked about them in a podcast as well so you might wanna look into that. Ancestry and 23 and me both do a limited amount of health related information ancestry’s was horrible I I did it I had to pay extra for it and it was totally useless to me I already had a lot more information from Prometheus.

I have an original Promethease account and yes Richard introduced me to it. It’s a great tool.

Lying in the ICU with a PE I could pull up certain genetic factors that helped create that problem. I told my doctors, they retested and immeadiatly we all knew that I was Hetrozygous for Leiden FV & FVIII.

Currently my wife is dealing with ENLOS DANLOS & having this tool has been helpful as well.

I’ll add we also use it in my APOE4 & ALZHEIMER’S FB group.

Thank you, @collaroygal and @marklifestyle. So, it looks as if you get your genetics from somewhere (like 23andme or ancestry.com), and then upload the data and get results (after payment, of course)?

Edited to remove quote of a single word, which I used to search.

you get your genetics from somewhere (like 23andme or ancestry.com), and then upload the data and get results (after payment, of course)?

Bob, that’s exactly right, from my experience. It worked perfectly and was nicely informative.

I did it all before payment. And yes, I ran my 23&me through Promethease

Three levels of 23 and me

I see I’m a bit late to this party, but when I had my 23&Me test run, there weren’t three versions. It was most like the last one on that Ancestry page. The middle one here. My wife and I both had done both as sort of a lark, not expecting much out of it. This was a couple of years ago and Prometheus was not just a separate place but so cheap it wasn’t even a question about doing it - like $5 ea. I’m pretty sure I recall 23&me was like $100 each.

23&Me doesn’t analyze as many genes as Prometheus did, and of the few 23&Me included in the report, they got most of them wrong. For example, there’s one gene that they said means I prefer the taste of salt over sweet and that has never been the case in my life. I was also told I had a MTHFR mutation and dutifully tried the methylated B vitamins. After not noticing the slightest difference in how I felt, I reread the Prometheus report and found I have the mild version that doesn’t cause elevated homocysteine levels.

As for Heritage, both of us know our family trees well and wouldn’t have bought that, but 23&Me includes some of that. My wife got the biggest kick out of 23&Me saying she has a lot of Neanderthal genes and she’s been working on jokes that start with, “a short, blond neanderthal walks into a bar…” for years. That’s about as far as she’s gotten.

The way I tend to think of this picture is that I’m too old to die young, which is what genetic tests are most valuable for. Like @marklifestyle’s story. After 65 the death rate is pretty constant, because of those who died young. The big picture is the death rate per capita is 1.00

I was also told I had a MTHFR mutation and dutifully tried the methylated B vitamins. After not noticing the slightest difference in how I felt, I reread the Prometheus report and found I have the mild version that doesn’t cause elevated homocysteine levels.

Interesting, Bob. I do have elevated homocysteine levels and tried B vitamins…and noticed no benefit. I did not, however, get my homocysteine retested. But I was expecting to feel better or notice “something”, and I never noticed anything…at all.

Here is a pic of what I called up in the ICU ward to show my doctors which led to a whole array of other tests. 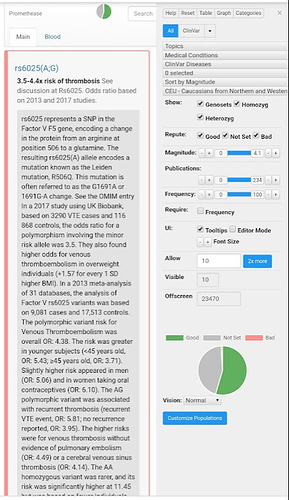 image.jpg447×771 123 KB
from Promethease. As I learn more I delve more into searching for things. Like @CFLBob I am pretty interested in the epigenetics .

Its a great reference guide not an OH ■■■■ I am so ■■■■■■ guide. I also found that I am a part of the population that lacks deep sleep so every time some doc tells me I not getting enough sleep I ask them to explain how the different subsets sleep needs vary.

I do eat a higher saturated fat diet than my wife based on this. She is 3/4 and eats more mono saturated:

Bob, here’s a different look. According to this I will have high LDL which is correlated with heart disease by a risk factor of 1.4x. The fact that I do have high LDL going back 40 years but once going keto and letting those soft plaques settle I have reversed my CAC Agatston Score by 8.2% defying the genetics. There is more here than fate.

I personally think LDL has little (nothing?) to do with atherosclerosis. I think it’s protection of your endothelium. Though people with FH (familial hypercholesterolemia) have high LDL, there’s new data indicating it’s not the LDL but coagulation factors that are more important.

Ok, my next paycheck, I’ll get some genetic testing done. And then I’ll have it analyzed.

I have that rs599839 (A;A) too. I haven’t looked at this report in a while; when Promethease was being bought, they said download anything you want before it goes away (or behind a paywall - I forget).

I was just looking at for the first time in years, so more or less completely unfamiliar with it. It pointed out different snips that said I had 1.2, 1.4 and 1.5 increased risk of cardiovascular disease (CVD), and was trying to think about what that says about overall risk. My gut feel is they’re all independent variables, so the product of the inverse of those risks is the chance that I don’t get a CVD problem. That worked out to be a 40% chance I don’t get a CVD problem.

I think the way this all pans out is by survey questions. 23&me asks do you have high cholesterol, do you have heart disease and so on. They then look at their respondents data sets and find correlations. On other genes researchers and the like have made definitive correlations and some mechanical ones as well as gene therapy proves.

All that being said, my Dad had heart disease but he ate a good ol’ Appalachian Diet of hash, grits, cornflakes, fried baloney on white bread…ya know the staples. AND THEN we killed him off after his first heart attack switching him to fake Egg Beater eggs, Fleischman’s margarine, turkey bacon…sigh. Our intentions were good.

So I believe my own heart disease was a function of my SAD even though that was a healthier SAD than most. AND I also had a lifelong affinity for sardines, beef liver and steak. Hardly ate anything out of a box until the last ten years prior to keto. That my CAC rose after 2 years of KETO in my mind shows the soft plaques stabilizing and becoming calcified. Then it slowed and finally started reversing. I hope to see a continuing trend of reversal in April the date of my next test.

Are your genes from a Nordic country?

I don’t believe genetic polymorphisms mean what the experts make them out to be. Negative.

Here is an example. I’m 100% Italian. My hair is dark brown but since eating a lot of walnuts rich in arginine. I’ve had blonde hair pop up.

Blond hair is a rare human phenotype found almost exclusively in Europe and Oceania. Here, we identify a cystine-to-arginine change at a highly conserved residue in tyrosinase-related protein 1 (TYRP1) as the single source of blond hair in Solomon...