One thing that keto has NOT helped with is my deep and abiding hatred of the heat. And by heat, I mean anything above 60 degrees in the sun.

Today, they forecast 74. In Portland, Oregon, meteorologist’s language, that means “Actually 76 and probably 78 and if you add the direct sun bearing down on your scalp straight through that sunhat, closer to 98.”

After loading, unloading, and spreading two loads of soil I felt my legs buckle under me a couple times, and called it a day. Am sitting here now with one of those freezer gel packs balanced right on top of my head.

And it’s only May. 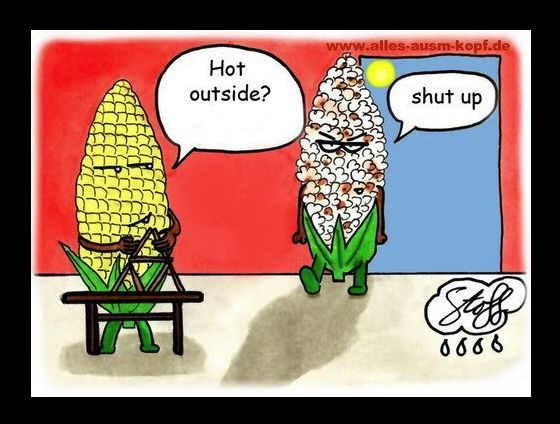 I can be outside in 20 F degree weather and in 10 minutes after doing light labor I am sweating.

I lived in Houston, TX for over 50 years and was miserable every time I went outside, not matter what time of the year. We had maybe a dozen days a year where the weather was dry and cool. There was not a month we didn’t run the A/C at least part of the month.

Here in NW Arkansas it gets hot and humid in the summer, but doesn’t last 9 months like it did in Houston. We have 4 seasons, which I love. Right now it is in the 50’s but 95% humidity - ugh. We were in the lower 90’s last week so the cooler temps are much welcomed, even though it won’t last.

We are putting in fencing for our puppy (here next week!) and my wife’s extended family’s 3 other dogs. We went out and cut down quite a few small trees/bushes to make way for the fencing, then drug them into the woods. We were wearing thin coats Friday evening, had to sleep under covers, and by Saturday morning, it was 80 or so plus relatively high humidity. Brutal when you’re used to <60F. Sweat was dripping off me.

Worked Saturday and Sunday mornings both days hit near 100F if you factor in humidity) until it got too hot and we had to go inside.

The good news was that I felt fine in terms of being able to do this without any breakfast. Thanks, low carb. A few hours in the morning, each day.

I did not, however, go jogging then do this. That was my plan, jogging once over the weekend. I think the cutting and dragging was plenty.

Thanks for the back up, guys. Glad to know I’m not the only one roasting out there.

I’ve always been a polar mammal, pretty much since birth. Spring is nice and all but it sounds the death knell of all my outdoor joy. I miss jeans jackets because the day one started to feel comfortable again in the fall, I knew it was my time to shine, they were the ultimate thermal indicator.

Speaking of heat, I don’t grow ‘em anymore because severe histamine intolerance, but here’s a lil’ weather chart for your taste buds. Hot enough for ya? 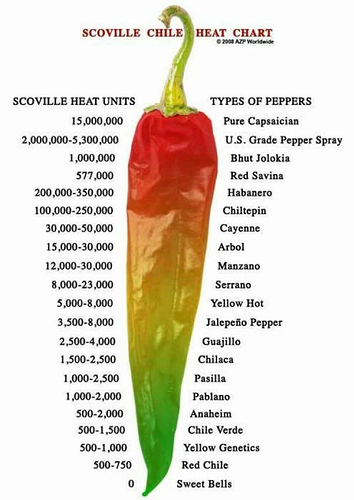 I was (still am) one of those folks who could eat “wings of DEATH” with aplomb. I’ve cut way back, due to getting allergy symptoms with some of these. But lately, I’ve been adding them back in. I don’t seem to have the allergy symptoms as much. I’m not sure why.

Tobasco supposedly scores 30-50,000 Scoville units. That stuff is like drinking water to me.

I’d take the Buffalo Wild Wings challenge (toward the end): 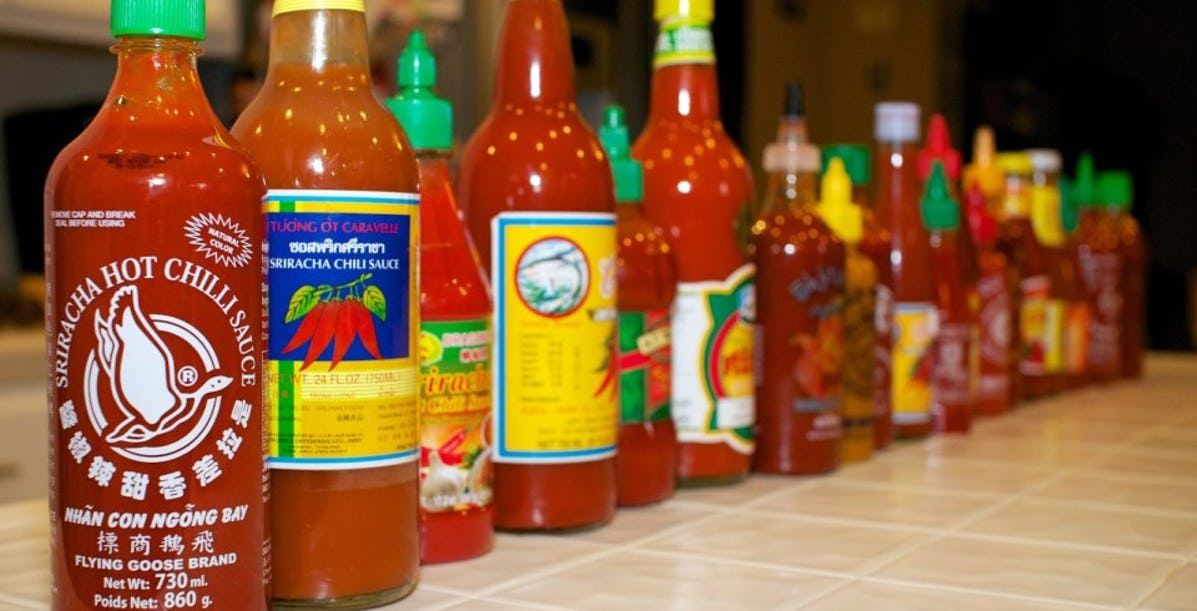 Sriracha Or Tabasco? The Scoville Heat Units Of 10 Most Common Hot Sauces

Now that our mouths are watering, just how hot is the "hot sauce" that's sitting in your pantry right now?

Watch to the end.

Craig is a hoot. As a Scottish-American, I’m proud that both countries can claim him. But come on, a pepperoncino isn’t that hot! Really!

My buddy Mark got me to try oysters for the first time at a restaurant in New London during the last Ketofest. I know quite a few people who love them, but for me, they were meh. I was glad to have tried them, although I’d rather have a spicy sausage any day!

That’s what I thought it was.

I’d rather have a spicy sausage any day!

They missed out scotch bonnett 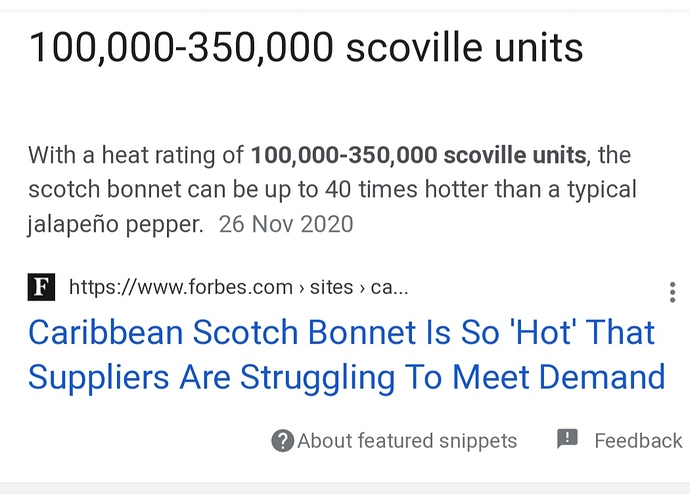 My cheeks are burning just reading that.

Never had any problems getting hold of these peppers. The taste is so good … yes you can taste the difference … not just the heat, I always used to have some in my fridge.

I’m not sure how accurate these scales are. I bought some supposedly super-hot dried peppers (can’t remember the name right now), and I’ve been adding them to my fermented/pickled products. If I add a single one, I can’t tell anything has been added.

On the other hand, I made these pickles: Get ready to pucker! Alton's fresh and tangy pickle recipe will be the best Gluten Free, vegetarian snack on the picnic table.

And they were so hot, I threw them away.

I may move to fresh hot peppers, as these might be better to gauge how hot they are.

So, it’s officially been one of the wettest springs on record in Portland, Oregon. Portland, people. That’s sayin’ something. My backyard is now a water feature.

Thing is, the plants I have back there are NOT water lilies, so I’ve been picking up soil all over town and birming it into islands in my erstwhile suburban sea, trying to transplant my entire landscape design onto higher ground. But mud doesn’t stack and soil turns into mud the second it hits the waves, so I’m working a few hours at a time at dawn in between downpours, building things up and then watching them slide back down again, section by slimy section, pulling plants out, putting plants back, scraping off half my garden from the lug soles of my boots at the back door.

It’s been slow going and now spring is turning into summer. Temps are rising: I am not a fan of temps. I’m a polar mammal, that’s why you’ll see me out there in my Ugly Clothes with a shovel at dawn and then only see me again as I shuffle back into my cool, air conditioned house like a toad the second the sun starts to warm the grass. I haven’t been sleeping well of late, so rising from the blankets at first light for this has been a giant, yet inescapable, imposition. Like a sleep-deprived Sisyphus, I’ve been trying to push soggy soil up a new hill every day.

I’m sure it’ll look great when it’s finished. When one of us is finished.

George Carlin had a bit he did about the corruption of language through too many syllables. Adding syllables doesn’t make it clearer, he said, nor more important. I give you Portland, Oregon, meteorologists.

1995: Rain. One syllable, gets to the point quick, quick enough for you to dash back inside and grab the waterproof shell.

2000: Rain event. Three syllables, but it’s still rain. Also, what else could it be besides an event? A dress rehearsal?

2010: Precipitation. Five syllables, takes five times as long to say you should’ve rolled up the windows on the SUV.

2015: Areal Flooding. We haven’t gained or lost any ground here, still 5, still annoying, still orange cones everywhere on the highway outlining the deep water danger like a scene from Jaws.

2020: Atmospheric River. We’re up to 6 syllables now but we’re not any more prepared, nor conditioned to the fact that, sometimes, it’s just not possible to drive across town without seeing a floating vehicle.

2030: H20 Apocalypse. Just my own prediction, but I expect we’ll need to differentiate between the different chemicals raining down on our heads during rush hour by now.

Just went to look for some puzzle books! ! Oops how did they get in the trolley… and where are my puzzle books?! 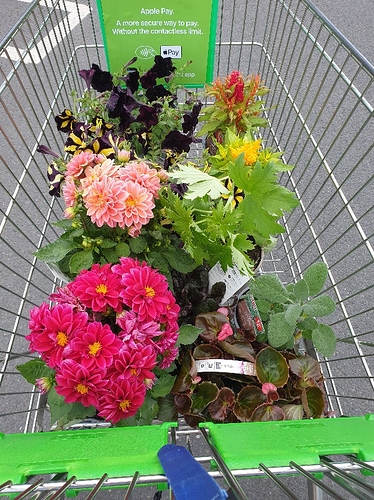 I hate when that happens. Let’s see, what do I need…butter, milk, toilet paper…PRETTY FLOWER THINGS! 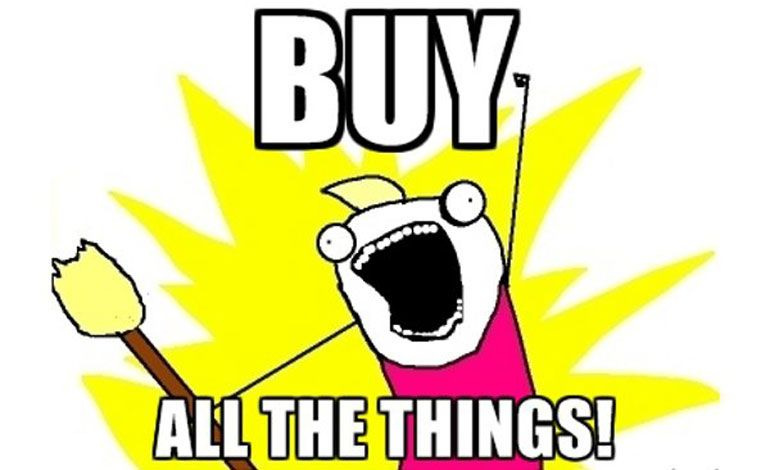